What you need to know about what's ahead for Greece

What's the next deadline for Greece? Will it leave the eurozone? And is there a deal that can save it? 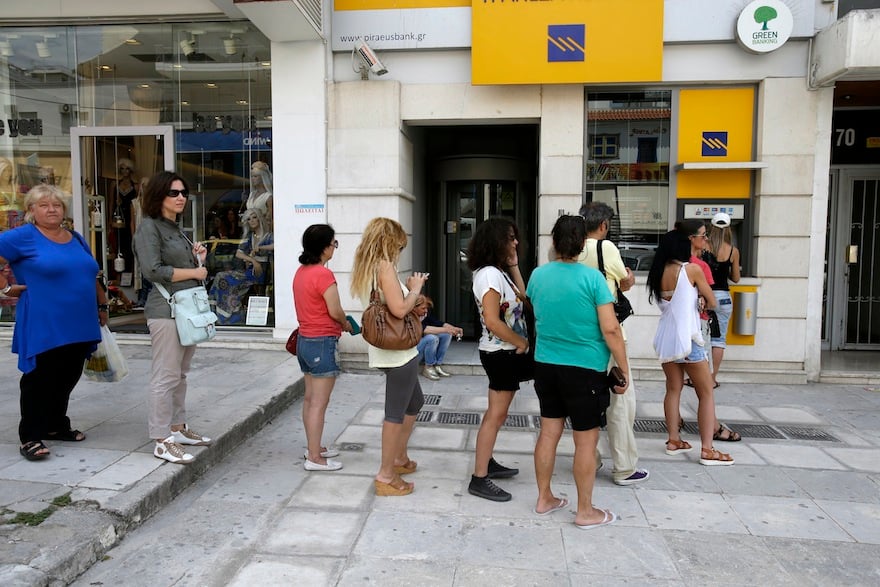 People line up at an ATM outside a Piraeus bank branch in Athens, Monday, June 29, 2015. Anxious Greeks lined up at ATMs as they gradually began dispensing cash again on the first day of capital controls imposed in a dramatic twist in Greece’s five-year financial saga. Banks will remain shut until next Monday, and a daily limit of 60 euros ($67) has been placed on cash withdrawals from ATMs. (AP Photo/Thanassis Stavrakis)

Out of money, cut off by its creditors, its banks shut, the struggling country will vote Sunday on whether to accept painful cutbacks in return for desperately needed financing.

Between now and then Greece remains suspended between collapse and an uncertain rescue, between membership in the 19-member euro club and the possibility of a humiliating exit.

A look at what’s ahead:

What is the next deadline for Greece?

On Tuesday, the main part of Greece’s bailout deal expires. With no agreement to release the last 7.2 billion euros ($8.1 billion) from that deal, Greece is on its own.

An EU official said that after the deal expires, it would take weeks for creditors _ other eurozone states and the International Monetary Fund _ to put a new agreement on track.

Tuesday is also the day Greece has to pay a debt of about 1.5 billion euros ($1.7 billion) to the IMF. If Greece doesn’t pay, it will take a while for the IMF to actually declare Greece in default. Credit ratings agencies say arrears to the IMF will not immediately trigger a default crediting rating for Greece.

But the IMF won’t give Greece more money unless the arrears are taken care of. That puts Greece in the same bin with fragile, war-torn developing countries in Africa and Latin America.

Prime Minister Alexis Tsipras has called a referendum for Sunday. Greeks will be asked to vote if they support a bailout deal that creditors have proposed that involves budget cutbacks and tax increases in exchange for the remaining loans in the country’s rescue program.

Tsipras is urging people to vote “no.”

The catch, however, is that by the time of the vote, Greece’s bailout program would have expired. So it’s unclear exactly what the Greeks would vote on and how the question would be framed.

Jean-Claude Juncker, president of the EU Commission, has urged Greeks to vote “yes” to a deal, no matter how it is worded.

A “no” vote could mean euro exit is closer for Greece, as the country would have no outside financial aid.

Some think a “yes” could restart talks. Joerg Kraemer, chief economist at Commerzbank, says that “should the electorate vote in favour of a compromise, the eurozone members will not be able to ignore that and will resume negotiations.”

A “yes” vote, however, could lead to the collapse of the Greek government, as it is unclear it would be able or willing to implement a deal with creditors that it had so vehemently resisted.

Is a deal to save Greece still possible?

Technically, yes. Pierre Moscovici, the EU’s top economic official, said Monday that a deal was “a few centimetres” away.

EU officials and creditors indicate they are still willing to strike a deal. Tsipras, however, has dismissed all their proposals so far as insufficient.

Will Greece leave the eurozone?

Many see Greece’s decision to close the banks as a step closer to leaving the euro.

The banks’ trouble is a bad sign, because the Greek government would need billions of euros if it has to rescue them without outside support. Until Sunday, the ECB had been keeping the banks afloat by increasing emergency credit as deposits fled.

A modern economy needs functioning banks. For Greece that would mean printing a new currency and using it to refloat the banking system.

Greece is also having serious trouble paying its day-to-day bills for salaries and pension.

If it starts issuing scrip — official IOUs for payment later — that could be the first step in introducing a new currency.

If Greece leaves the euro, will the shared currency fall apart?

Many economists say no.

Since its troubles over high government debt started in 2009 _ in Greece _ the eurozone has built anti-crisis measures. Those include a pot of money to rescue troubled governments and an offer by the ECB to buy the bonds of governments facing market pressure. The ECB’s current 1.1 trillion euro bond-buying monetary stimulus program has further insulated markets from panic. The ECB says it will take additional steps if necessary to keep Greece’s troubles from spreading.

In the longer term, however, some experts think a Greek departure sets a bad precedent. Investors might think other countries could leave, and would require higher interest to lend those countries money. That would hurt the countries financially, in the longer term, and market pressure could conceivable force them out too if they run into trouble.

Will a Greek exit from the euro hurt my investments, as the Lehman Brothers collapse did in 2008?

Stocks were down globally on Monday, though there was no outright panic.

U.S. Treasury Secretary Jacob Lew says no one really knows what the fallout would be from Greek exit. Which is why he thinks it should be avoided.

Demetrios Efstathiou, economist with ICBC Standard Bank, says it would not be comparable to 2008.

“The collapse of Lehman Brothers came as a shock to the markets,” Efstathiou said. “In contrast, Greece’s dire financial position has been discussed to exhaustion, for many years now, and its bonds have been trading at distressed levels for many months.”