Eight questions about the investigation into the death of Sandra Bland, a Chicago-area woman who died in a Texas jail 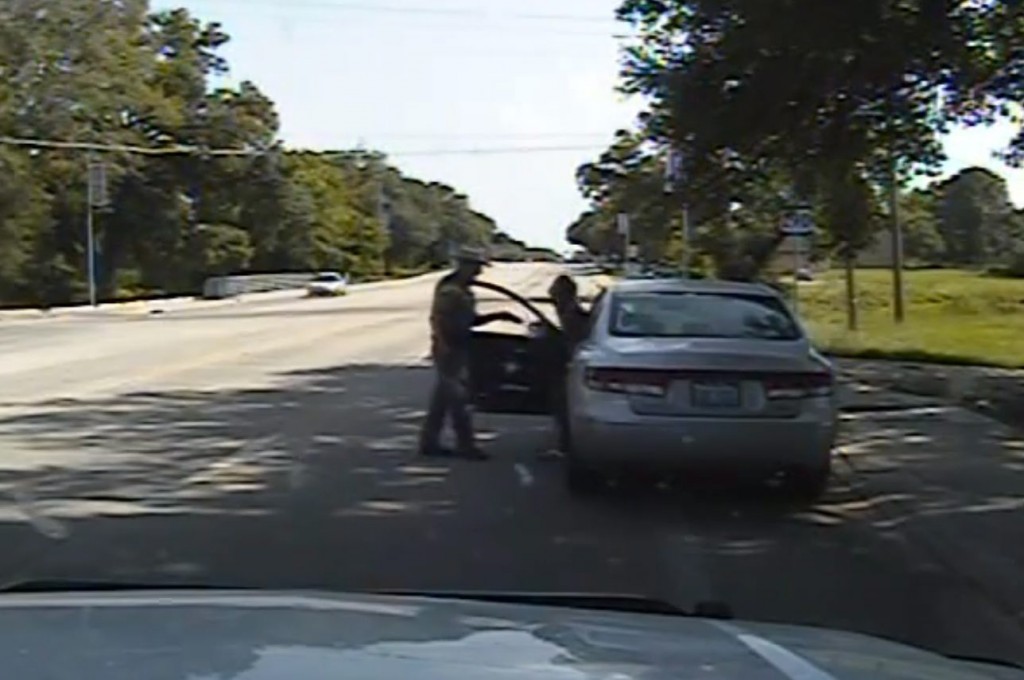 In this July 10, 2015, frame from dashcam video provided by the Texas Department of Public Safety, a heated confrontation between trooper Brian Encinia leads to the arrest of Sandra Bland after a minor traffic infraction in which the state trooper tried to drag Bland from her car, drew his stun gun and threatened that he would “light you up” in Waller County, Texas. Bland was taken to the Waller County Jail that day and was found dead in her cell on July 13. (Texas Department of Public Safety via AP)

DALLAS — Recently released dashboard-camera video and booking records have answered some questions in the case of a Chicago-area woman who died in a Texas jail, but other questions are still unresolved.

Sandra Bland, who was from Illinois, was stopped July 10 after coming to Texas to interview for a job at Prairie View A&M University, a historically black college from which she graduated in 2009. The traffic stop for failing to signal a lane change escalated into hostility. She was arrested on a charge of assault of a public servant, accused of kicking a state police officer and taken to a jail in Hempstead, northwest of Houston. She was found dead in her cell July 13.

Authorities have said the 28-year-old black woman hanged herself with a trash bag, a finding her family has disputed.

Here’s what is known so far:

What does the Dashcam video of the arrest show?

The video shows a routine traffic stop that became confrontational when the officer asks Bland to put out a cigarette. She asks why, and the trooper then orders her out of the car. She tells him she doesn’t have to step out, and he continues to yell at her. At one point, he pulls a stun gun and says, “I will light you up.” After she steps out of the vehicle, the trooper orders her to the side of the road, where the confrontation continues off-camera but is still audible. The officer says in an arrest affidavit that she swung her elbows at him and kicked his shin after being handcuffed.

Why did Bland spend three nights in jail?

Family attorney Cannon Lambert and Bland’s sister Shante Needham said relatives were working to get the money for bail when they learned of Bland’s death.

What’s known about her health and mental state?

Family members and friends say Bland had given no indication that she would kill herself. But a questionnaire filled out for Bland when she was booked into the jail states she told officials there she had tried to kill herself by taking pills after losing a baby. She also told them she was epileptic and was on medication for that condition, though her signature appears on another document that indicates she was not taking any medication. Bland had posted a video to her Facebook page in March saying she was suffering from “a little bit of depression as well as PTSD,” or post-traumatic stress disorder.

What happened the morning she was found dead?

No cameras were in the jail cell where Bland was found, but a camera monitoring the hall outside her cell shows no one entering or leaving it between the last time she spoke with deputies — via an intercom system — and when her body was discovered about an hour later. Following Bland’s death, the jail was cited by the Texas Commission on Jail Standards for not observing inmates in person at least once every hour and not providing documents proving that jailers in the past year underwent training on interacting with potentially suicidal inmates.

What does her autopsy say?

The Harris County medical examiner’s office has ruled Bland’s death suicide by hanging, but the full report has not yet been released. Her family is having an independent autopsy conducted.

What’s the status of the trooper who arrested her?

The Texas Department of Public Safety says the trooper violated traffic-stop procedures and the department’s courtesy policy. Pending the outcome of the investigation, he’s been assigned to administrative duties.

The Texas Rangers, an investigative arm of the Texas Department of Public Safety, and the FBI are investigating. FBI spokeswoman Shauna Dunlap said the bureau is monitoring the investigation and once it’s complete will review the evidence to determine if any federal laws were violated. The Waller County chief prosecutor says the case is being examined as thoroughly as a murder investigation and will be turned over to a grand jury.

What’s the history of the sheriff?

The case has put a spotlight on Waller County Sheriff Glenn Smith. A former justice of the peace for Waller County, DeWayne Charleston, has joined a friend of Bland’s in telling county commissioners that Smith should step down, saying a racist culture persists in the county.

Questions have been raised about Smith’s past, including a 2007 incident for which he was disciplined when he was the police chief in Hempstead.

Smith, who is white, was punished for using profanity and pushing a black man during an arrest, according to Hempstead Mayor Pro Tem Patricia Chernosky.

After the incident, Smith was suspended for two weeks without pay, put on probation for six months and ordered to take anger-management classes, Chernosky said. She said Smith was fired from the post in 2008 because the city council lacked confidence in his abilities but that she did not think the rationale included racism concerns.

Smith said there were “a lot of accusations back in the ’07, ’08 era,” which he called “a political thing.”