With its big cities straining, refugees are being bused to remote rural towns and testing a nation’s tolerance 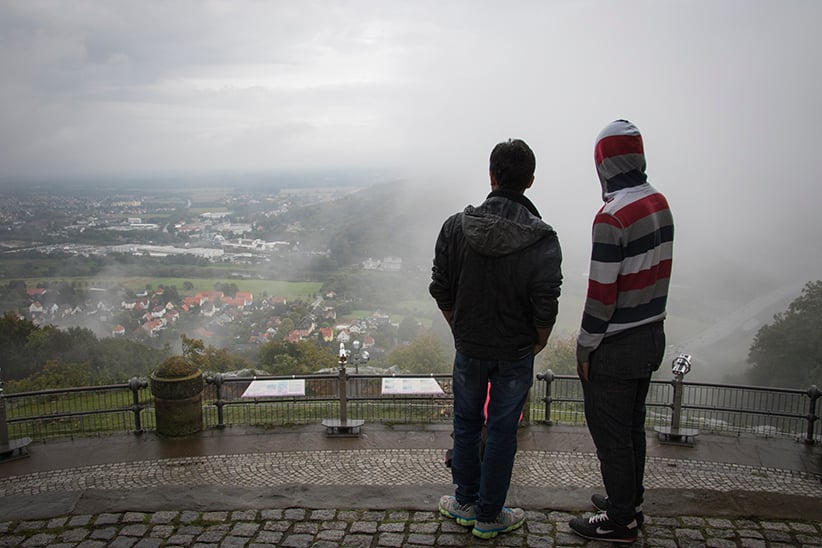 Qassim Ali (left) and his friend from the refugee shelter at the power station in Veltheim, Germany. (Photograph by Adnan R. Khan)

When Qassim Ali first turned his life over to human traffickers in Pakistan, he had a very specific image of where he’d end up. The traffickers themselves had only given him the vaguest of ideas: Europe, they’d said. But for Ali, an 18-year-old labourer from Gujranwala, a raucous industrial city of more than one million in Pakistan’s Punjab province, the dream of a new life was more specific. He pictured the broad streets and electric energy of Berlin, with its promise of work and a network of Pakistanis.

So when he set out from his rundown inner-city home, making the gruelling  journey of more than 6,000 km across eight borders, hiding in the trunks of cars, stealing through fields and forests in the dead of night and, finally, clinging for life to the gunwale of a rickety old boat crossing the Aegean Sea, it was the image of Berlin that kept him going.

“The whole time, I pictured finally arriving and walking under Brandburger Gate,” he says, mispronouncing Berlin’s iconic Brandenburg monument. “I thought: Once I’m there, I can finally say, ‘I have arrived.’ ”

He never got that chance. Ali’s journey didn’t end at the refugee registration centre in Berlin’s Moabit neighbourhood, where thousands of other men, women and children from some of the world’s most dangerous places have congregated during Europe’s refugee crisis. Overwhelmed German authorities, desperately looking for ways to house the vast crowds, instead put him on a train, along with dozens of other refugees, mostly Syrians. He eventually arrived in Minden, a picturesque town in Germany’s northwest, and, from there, was bused to a refugee shelter set up in a decommissioned coal-fired power plant in the village of Veltheim, on the banks of the Weser River. “When they first brought us here, I thought they were taking us to another border and releasing us into the forest,” Ali says.

In Germany, where upward of half a million refugees have arrived—passed on like a hot potato by European countries fearful of a Muslim invasion, or simply unable to care for the vast numbers pouring in—it’s becoming more and more common to find bewildered refugees strolling along bucolic country roads and biking through farm fields to the local market.

Their presence has caused some controversy—and even outright violence, in some cases—in places that have little experience with visible minorities and virtually no contact with Muslims. Veltheim, a farming village of slightly more than 1,000, has taken in nearly 300 refugees so far, all of them housed in the local power plant. Other villages making up the administrative district of Porta Westfalica (Vennebeck, Eisbergen, Lübbecke and Kleinenbremen) have taken in hundreds more, while at the state level, North Rhine-Westfalia, a region two-thirds the size of Nova Scotia, the numbers are approaching 100,000.

Housing shortages have forced local authorities to distribute the refugees in temporary shelters throughout the region, occupying refurbished farmhouses, storage depots and schools in a frantic attempt to cope with the unprecedented influx. Tent cities are popping up everywhere, officials say, where refugees may be housed for up to six months, despite the fact that winter is coming, leaving some scratching their heads over the wisdom of Germany’s refugee policy.

“The decision to let in so many people when the rural infrastructure is not ready for it could backfire,” says Karl Schmeding, Porta Westfalica’s deputy mayor. “The authorities are overwhelmed. The pace of the refugee influx is difficult to manage and everything is happening last-minute. We’re often given as little as two days’ warning before refugees arrive, two days to find and prepare a shelter for them. Then, when that shelter is built, another request comes in, and then another.” 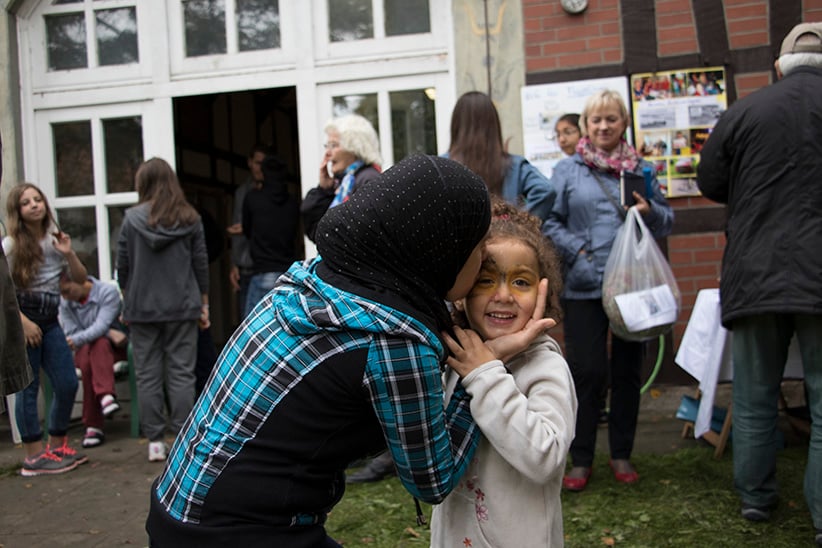 Housing is only the first stage of the emergency response, local volunteers say. Feeding the refugees, providing them with access to medical services in a region with limited public transport, and enrolling children in schools are just part of the everyday challenges administrators are facing. While most locals in Porta Westfalica have responded positively to the humanitarian side of the crisis, the reality is slowly setting in that the country may not be able to handle the influx and the growing social stresses that come with it.

While Germany has hosted large numbers of refugees in the past, the current wave is unique, says Hartmut Haselau, a volunteer at the refugee shelter in Kleinenbremen, 10 km northeast of Veltheim. “The last time I saw a refugee influx like this was during the early 1990s, when people of German descent arrived after the collapse of the Soviet Union,” he says. “At that time, the refugees were embraced by the local communities. This time, the response has been more cautious. You can see it in the way local people deal with them. They help, but the looks on their faces and their body language tell me that they also want to keep their distance. Seeing a black person, or a woman with a headscarf shopping in the local market, makes them nervous.”

Schmeding agrees and warns that government officials in Berlin have not done enough to give Germans a clearer picture of what the future holds, focusing most of their energy instead on trying to find a way to shift Germany’s burden to other nations. “We’re only just starting to make the attempt to let people know that some of these refugees could be here for a long time, even permanently,” he says. “We need to do a better job. It doesn’t look like the world is going to step in to relieve the pressure Germany is under. If people think this will all be over soon, and then it drags on, public opinion here could change.”

Concerns are already mounting over Germany’s neo-Nazi movement. This year has witnessed a spike in violent attacks on refugees, particularly in Germany’s east, where fascists draw much of their support. Porta Westfalica has been largely spared, but its mayor is still not taking any chances.

Two recent attacks on refugee houses have prompted a large security response: The newly built shelter at the power plant is under 24-hour guard, while other shelters have been fitted with surveillance cameras and floodlights. Locals have also offered to help, providing refugees with personal phone numbers in case of emergency, or simply to provide transport in case it is ever needed.

“This is a violent fringe,” Bernd Hedtmann, Porta Westfalica’s mayor, tells Maclean’s after addressing an anti-fascist rally in the village of Hausberge, the district’s administrative centre. “Of course, we’re worried about them.  We don’t want to give them any space to operate. Gatherings like this one send the message that they are not welcome here.”

For the refugees, fascists are one concern, but uncertainty is the overarching mood. At one refugee shelter in Eisbergen, the isolation of country life is beginning to take its toll. As many as 35 people, including women and children, share two converted storage depots on an empty stretch of country road, hemmed in on one side by a railway line and on the other by a two-lane highway and farm fields. On Sept. 16, one of the houses was fire-bombed, causing some damage to an exterior wall but failing to cause any injuries.

“It was frightening, especially for the younger children,” says Barzan Ismail, a 28-year-old Iraqi who has lived in the shelter for nearly three months. “We’re very isolated. It took the police around 15 minutes to arrive after the attack, and when I asked them why we are here, they told me there is no other place; Germany is full. But being here is difficult. There is nothing to do except eat, sleep and wait.” 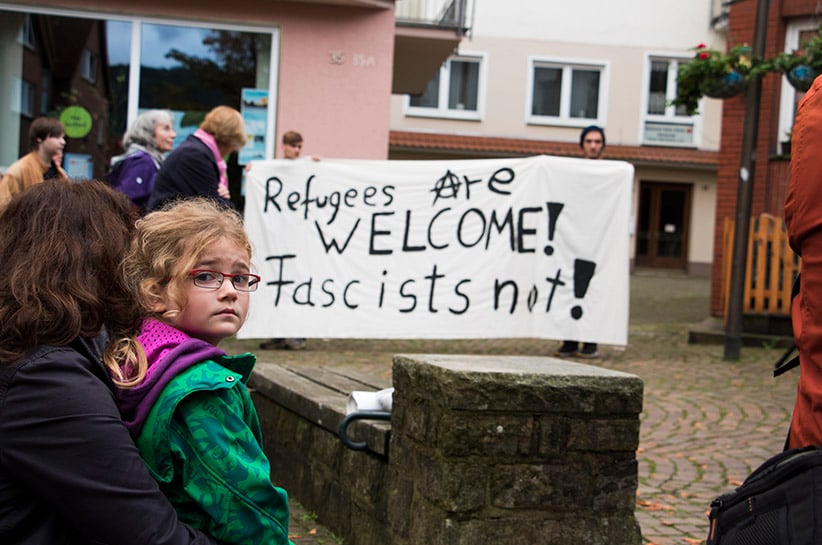 And they may be waiting a long time. The scale of the crisis has created a major backlog in Germany’s asylum procedures. Recent attempts by German authorities to slow the flow of refugees into Germany by setting up invasive checks along its open border with Austria have been met with protests by Germany’s pro-refugee activists, who say the official mood is now becoming less welcoming. More worrisome, they say, is a new asylum law being drafted by the German parliament that would severely restrict the social benefits refugees receive, while quickly rejecting the asylum requests for those deemed to be “economic migrants” arriving from “safe” countries. The law would also restore the Dublin III regulation, which German authorities suspended at the end of August, allowing Germany to deport refugees back to the first European Union country from which they arrived.

Critics argue that the law represents the dark side of Germany’s apparent open-door refugee policy, designed to placate the violent right wing. Those most at risk of deportation—Pakistanis and Albanians, for instance—say they are losing hope of meeting the new criteria for refugee status. “Syrians are the priority now,” says Lilit Mkrtchyan, a 32-year-old mother of two from Armenia. “We all realize this: The Syrians will get everything and we will be forgotten.”

To counter the new law, German activists say they are prepared to stop the deportations using all the means available to them, including preventing airplanes transporting deportees from taking off, a tactic that has been used in the past.  But Mayor Hedtmann defends the policy, pointing out that those most in need of protection must come first. “The Syrians alone represent millions of refugees,” he says. “Sending some people back is not an easy decision for Germany, but one that we have no choice but to make.”

He, along with his deputy, Schmeding, both emphasize that the world is only witnessing the first stages of a crisis likely to continue for the foreseeable future. Rather than looking for excuses not to accept refugees, the world should focus on the positives. “Particularly in smaller places like Porta Westfalica, where migration to the cities is draining the workforce, refugees offer a unique opportunity,” says Hedtmann. “We have a real chance here to revitalize our rural economies, and refugees can play a big part in that.”

The question is if the refugees themselves are willing to stay.  Many tell Maclean’s that life in rural Germany is too isolating, and the lack of access to urban infrastructure—such as public transport and immigrant social networks—makes planting roots difficult.

A few, however, see things differently. “I don’t mind the countryside at all,” says Aliya Haddad, a 33-year-old mother of two from Latakia, Syria, now living in Veltheim’s power plant. “In Syria, the cities are in ruins; in Turkey, the crowds became too much for me. I’ve had all I can take of city life. When I smell the soil here and see the horses, I feel like I have reached a kind of paradise. I think I could get used to it.”