What's it like in Washington on the eve of President Trump? 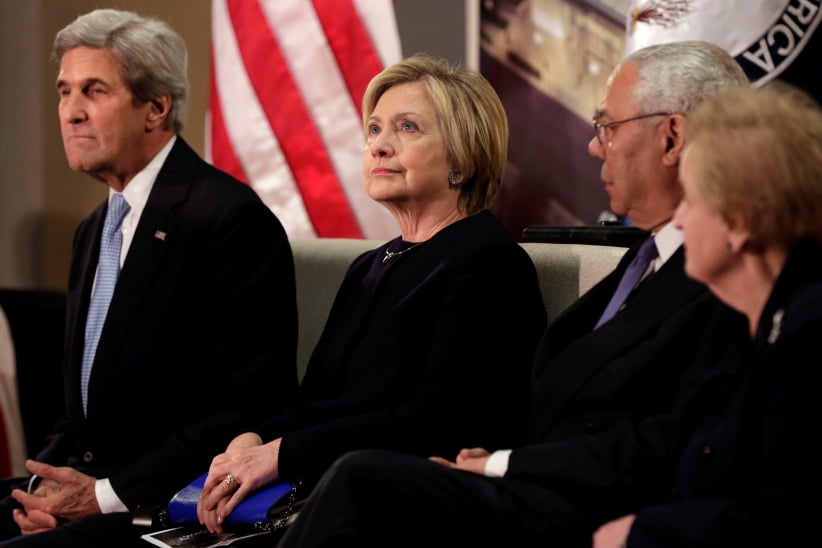 A standing ovation and whoops of delight greet a beaming Hillary Rodham Clinton as she enters the marble-floored hall, but, as this correspondent’s late mother used to say, that and 15 cents will get her on the subway.

Clinton is arriving beneath the (actual) glass ceiling of the new Hillary Rodham Clinton Hall at the headquarters of the U.S. Department of State, colloquially known as Foggy Bottom. A ceremony is being held to inaugurate a museum dedicated to American diplomacy through the centuries. As you may be aware, this is not the only inauguration scheduled for Washington this month.

As a series of self-congratulatory remarks are droned from the podium, sitting next to Clinton is the long-faced, lame-duck, multi-millionaire Secretary of State John Kerry, who is one of a handful of living people who know exactly how she feels, having been defeated, with no one to blame but himself, by George W. Bush in 2004. Imagine Kerry’s empathy, then, for a woman who failed to gain the presidency not once, but twice, and who also may go down in history for serving as doula at the birth of ISIS, squandering the naïve hope of the Arab Spring and the Colour Revolutions, cowering before totalitarian Mandarins and Muscovites, and endangering the stability of postwar—now perhaps pre-war—Europe in concert with her novice, Nobel-laureate President.

Donald Trump’s ascension to the Oval Office—and America’s deep descent down the rabbit hole—is barely a week away as Clinton rises to speak in her new role as relic. “The world looks to America as the indispensable nation,” Clinton says. “If we stay true to our values, our country will weather every storm on the horizon.”

She notes that the glass-walled Clinton Hall is “the most transparent part of the entire project” and everybody laughs. Then she espies “a rising tide of authoritarian illiberalism” around the globe and everybody thinks of V.V. Putin of the Kremlin and his pouty, paunchy Sancho Panza, Donald Trump.

What is it like to be in Washington on the verge of the Trump presidency? On one hand there is the remarkable and underappreciated reality of the peaceful transfer of power to a new chief executive, the world-changing precedent initiated by George Washington himself in 1797 and still anathema to autocrats from Moscow to Beijing to Pyongyang to Havana. This hallmark of American democracy is reaffirmed and ennobled by Clinton’s (public) good humour and her announcement that she indeed will be in attendance at Trump’s installation, ready, no doubt, to leap from the bleachers and take the oath herself should the Constitution be amended before noon on Friday to favour the winner of the popular vote.

MORE: Why does Inauguration Day happen on Jan. 20?

But on the other hand is the man in the Ku Klux Klan robe and pointy hood who leaps to his feet in a Senate meeting room and shouts, “I am a white man! I own this government!” and the woman in the pink Statue of Liberty costume who is screaming, “You’re evil! You’re evil!” and the lady who hollers “we have to stop these motherf–king pigs from getting into power!”

This is the confirmation hearing for Sen. Jeff Sessions of Alabama, candidate Trump’s first supporter in Congress and now his choice to serve as attorney general. “You know I believe in fairness,” Sessions demurs to his critics, just before another brace of citizens leaps up in tandem to harmonize that “this whole fascist regime needs to be stopped!”

Later, Sessions will be condemned as a lifelong enemy of civil rights by one of his own Senate colleagues, Cory Booker of New Jersey. The next day, African-American neurosurgeon (and go-nowhere presidential candidate) Dr. Ben Carson will be lobotomized as a heartless, minority-loathing ideologue by multiple Democrats on the Senate housing committee, and Trump’s nominee to succeed John Kerry at State will be hectored and hung out to dry by Marco Rubio as the 2020 campaign kicks off in venal earnest.

(It was Little Marco, of course, who vowed publicly and repeatedly that he would not seek re-election to the Senate after being Trumped out of the 2016 race, before blatantly breaking his word. Now Rubio was telling reporters in a Senate hallway that, in the matter of the nomination of the oily Rex Tillerson, “I’m prepared to do what’s right.”)

Even the inaugural ceremonies themselves have been sucked into the partisan quicksand, with the wound-licking American left gloating that, as the DCist newspaper put it last week, “Less than half the states have groups marching in Trump’s inaugural parade.” In 2008, the paper noted, 2,807 bands applied to stroll with the Obamas; this time, fewer than 50, nearly all of them from states that Trump carried in November, and none of them from the public schools of Washington, D.C. itself.

“Small hands, small parade,” laughed the DCist, while supernovae from Andrea Bocelli to David Foster made it clear that accepting an invitation from the whole fascist regime would be a career-killer, and even a few members of the Rockettes and the Mormon Tabernacle Choir made a public show of begging off.

Unstoppable amid the frenzy was the countdown clock itself, ticking toward noon on the 20th of January and a hand on the Bible, or The Art of the Deal, and whatever lies ahead in Wonderland.

“We are going to surround him with the soft sensuality of the place,” the chairman of Trump’s inaugural committee was saying as the seconds ticked away in shouting, posturing, fear, anticipation, and grief. Who needs Meryl Streep and Moby anyway? the chairman argued.

“We have the greatest celebrity in the world.”