Who is Emmanuel Macron and what is his plan for France?

A look at the political newbie who may become French president

By Sylvie Corbet, The Associated Press May 4, 2017 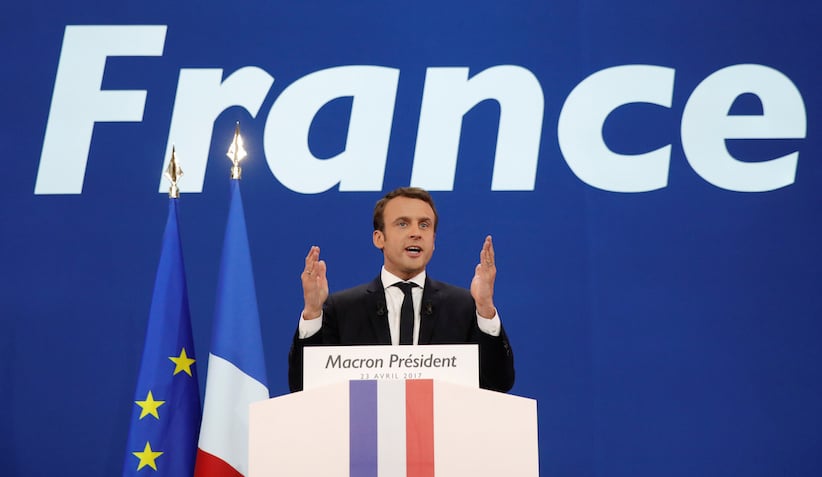 PARIS – French centrist Emmanuel Macron has already achieved an immense task: a former outsider with little political experience, he is now the front-runner in France’s presidential race, banking on the promise to reform the country through radical pro-business measures and pro-European policies.

The strong advocate of a free market and entrepreneurial spirit has called for France to focus on getting benefits from globalization rather than the protectionist policies advocated by the far right.

In his political rallies, Macron encourages supporters to wave both the French tricolour and the European Union flags.

Le Pen this week called him the face of “the world of finance,” the candidate of “the caviar left”.

“I’m not under control of the banks. If that was the case, I would have kept working for them”, Macron answered.

Macron had an unexpected test of his political skills last week during “the battle of Whirlpool,” when Le Pen upstaged him at a Whirlpool factory in Amiens that is threatened with closure.

Le Pen’s surprise appearance put him on the defensive and prompted him to meet with angry Whirlpool workers later the same day. He was whistled and booed when he first arrived. But he stood his ground, patiently debating workers in often heated exchanges about how to stop French jobs from moving abroad.

Macron promised to shake up the political landscape by appointing a government including new figures from business and civil society.

In a country shaken by recent terror attacks, he pledged to boost the police and military as well as the intelligence services and to put pressure on internet giants to better monitor extremism online.

To improve Europe’s security, he wants the EU to deploy some 5,000 European border guards to the external borders of the bloc’s passport-free travel zone. 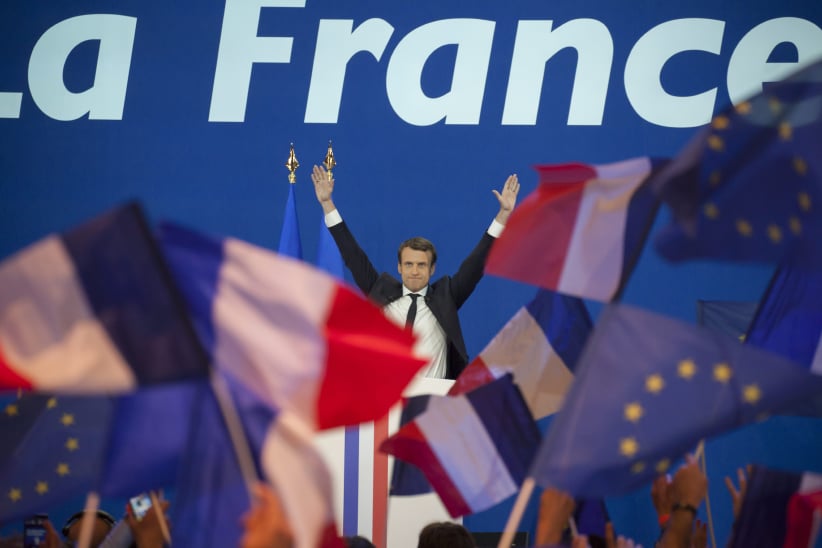 French presidential election candidate for the En Marche ! movement Emmanuel Macron raises his hands as he arrives on stage to deliver a speech at the Parc des Expositions in Paris, on April 23, 2017, after the first round of the Presidential election. (Stéphane Rouppert/CP)

Macron doesn’t run his campaign alone: his wife is never far away. Brigitte Macron, 24 years his senior, is his closest adviser. She has been by his side during the campaign, supporting him and helping prepare his speeches.

Macron and his wife have publicly described how their unusual romance started – when he was a student at the high school where she teaching in Amiens in northern France. A married mother of three at the time, she was supervising the drama club. Macron, a literature lover, was a member.

Macron moved to Paris for his last year of high school. “We called each other all the time, we spent hours on the phone, hours and hours on the phone,” Brigitte Macron recalled in a televised documentary. “Little by little, he overcame all my resistances in an unbelievable way, with patience.”

She eventually moved to the French capital to join him, and divorced. They married in 2007.

Emmanuel Macron says he would formalize the job of first lady if he wins the election, and says “she has her word to say in this.”

Macron has already experienced the challenge of reforming France.

He quit his job as a banker at Rothschild to become Socialist President Francois Hollande’s economic adviser, working for two years by Hollande’s side at the presidential palace.

Then as economy minister in Hollande’s government from 2014 to 2016, he promoted a package of measures, notably allowing more stores to open on Sundays and evenings and opening up regulated sectors of the economy.

Opponents on the left accused him of destroying workers’ protection. Tens of thousands of people poured into the streets for months of protests across France, and the government had to force the law through parliament under special powers.

Macron launched his own political movement, En Marche! (In Motion!) last year to support his candidacy, then quit the government a few months later.