Who is to blame for Syria's terrorists?

Russia and Syria are accusing the U.S. of backing terrorists. They should stop and ask who created the monster in the first place. 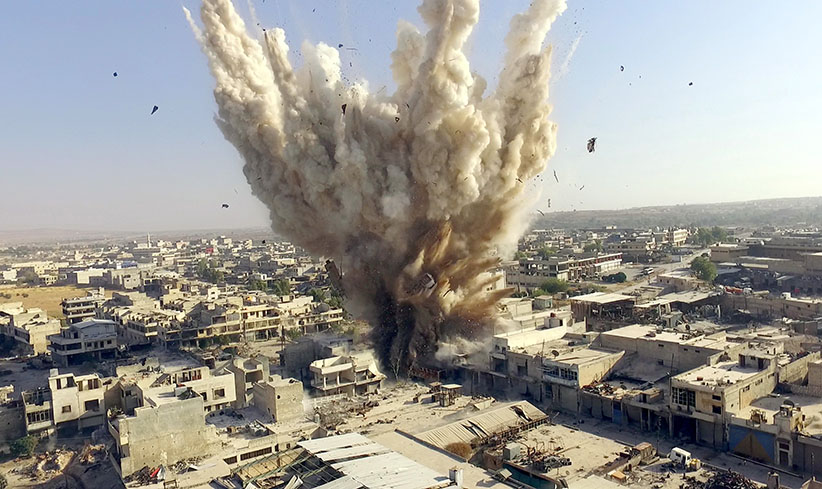 It was not without a heavy dose of irony that a Russian foreign ministry spokesperson warned the U.S. last week that toppling the Syrian regime would lead to “terrible, tectonic consequences” and create the conditions in which Syria would become a haven for “terrorists of all stripes.”

It’s not that the spokesperson was entirely wrong. Since the 2011 halcyon days of the now withered Arab Spring, the war in Syria has lost nearly all semblance of a grassroots battle for freedom and justice. Radical Sunni Islamists backed by Saudi Arabia, Qatar and Turkey, have become not only the face but also the substance behind the armed opposition. They are its most effective fighters without which the regime would no doubt easily rollover its adversaries.

If the regime were to collapse today, Syria would be at the mercy of these groups.  There is no denying that basic fact.   The irony, however, is why these religious fanatics exist at all in Syria. Some of the blame can be placed on Turkey: from 2011 to 2014, it allowed foreign fighters to stream across its border to join the then nascent Islamic State and its elder cousin al Qaeda. Turkish President Recep Tayyip Erdogan wanted his Syrian counterpart Bashar al Assad gone at all costs and anyone willing to help was welcome to go and try.  The ranks of the jihadists mushroomed.

But the flow of foreign fighters, by the Islamic State’s own admission, has dropped to a trickle in recent years.  According to some estimates, foreigners have been reduced to mere propaganda tools in Islamic State videos. Many have fled back home, disillusioned by the so-called caliphate’s very uncaliphate-like behaviour.

No, the prime source for jihadis must lie elsewhere. Certainly, many have come over from Iraq but not enough to account for the vast array of radical Islamist groups operating in Syria. Which leaves us with Syrians themselves.

By most accounts, Syria has never been a haven for fundamentalist Islam. Under the rule of Bashar al Assad and his father Hafez, being too religious was a liability.  In the 1990s and early 2000s, Syrian jails were packed full with religious activists, many from the Muslim Brotherhood. But after the U.S. invasion of Iraq in 2003, the strategic calculus changed. In early 2004, many of those activists were released in what the regime characterized as another step forward in its reform program.

Human rights activists and foreign diplomats in Syria weren’t buying it. The majority of the prisoners released at the time, one senior diplomat told Maclean’s, were either religious activists or the sick and elderly. “The last thing the Syrian government wants is political prisoners dying inside their jails,” he said

Anwar al Bounni, a leading human rights lawyer in Damascus, was more blunt. “Our military leaders are starting to recognize the political advantage of allowing fundamentalist groups some operating room in Syria,” he said. “They are, after all, killing Americans in Iraq.”

Ultra-orthodox Sunni Islam began to enjoy a period of relative freedom in Syria after decades of repression under the Shia Alawite Assad dynasty. Conservative preachers in the country’s northwest were given a new lease to pursue their visions of an Islamic society, setting up religious seminaries under the watchful gaze of the regime.

“The most dangerous thing for non-Islamic states is this system of religious education,” Sheikh Abdulghani al-Khaznawi, a village Imam who had established a seminary not far from the Islamic State’s current capital Raqqa, told Maclean’s at the time, “because it teaches the true Islam. It is dangerous because anyone who accepts the true Islam will only want to live in an Islamic state.”

His words are coming back to haunt the Syrian regime. Thousands of Syrians, encouraged by men like Khaznawi, volunteered to join the insurgency in Iraq.  Many have now joined jihadist rebels fighting the regime, the al Qaeda-linked Jabhat al Nusra in particular, which now calls itself Jabhat Fatah al-Sham.

In 2012, a report complied by the Washington-based Institute for the Study of War cautioned that Syria faced a serious threat from these homegrown jihadists who had been nurtured by the regime as anti-U.S. proxies deployed to Iraq.

“The emergence of indigenous Salafi-jihadist groups such as Jabhat al Nusra,” the report stated, “is far more dangerous to the long-term stability of the Syrian state than foreign jihadist groups because it represents a metamorphosis of a Salafi-jihadist ideology into a domestic platform that is able to achieve popular resonance.”

Indeed, it’s these groups, products of the regime’s own cynical policies, that are now being used as an excuse for a relentless Russian-led bombing campaign in Aleppo. Hundreds of civilians have died, including at least 100 children in the last two weeks alone, because of a monster the regime itself created.