Who the real extremists are in America

Adnan R. Khan: Can racism ever be washed away in America? One thing is clear, those trying to stop the movement are worried and destined to fail. 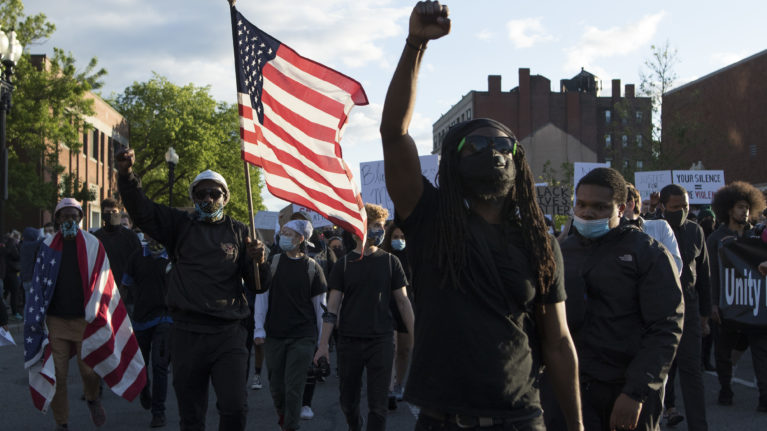 Boston, Mass., Black Lives Matter protesters march to the Massachusets State House on May 31. Protests in Boston ignited by the murder of George Floyd by Minneapolis police were largely peaceful until protesters were confronted by heavy-handed tactics of police. (Photograph by Adnan R. Khan)

There was a moment during the Black Lives Matter march in Boston on May 31 when it became clear that those who wanted to turn a legitimate outpouring of anger into a riotous paroxysm were destined to fail.

It was nearing midnfight. A police SUV was burning in Boston Common, just down the street from the hilltop perch atop which sits the Massachusetts State House. Down below, police and protesters were locked in running battles in the narrow streets and alleyways of downtown Boston, protesters pelting water bottles, fireworks and slogans; fully-armoured police responding with tear gas, pepper pellets and flash-bang grenades.

A few storefronts had been smashed, a few shops looted by a few opportunistic thieves, but the majority of the violence was playing out on the asphalt, between heavily armed, mostly white police officers and unarmed, mostly black protesters.

The burning police vehicle had attracted a small group of protesters. No one could tell me how it had ended up in flames but the general consensus was that it had been inevitable. The anger people felt toward the police after the murder of George Floyd was bound to erupt, a few of the protesters said, and the police were not helping their cause with the heavy-handed tactics they were using to deal with the protest.

No police officer had been injured but the burning vehicle was now blocking one of the routes up to the State House, and a line of police were preventing protesters from approaching the wreckage. The police inched forward, chanting: “Move back!”; protesters slowly retreated, lobbing glitter firecrackers that crackled in rainbow colours, along with the occasional water bottle.

Then suddenly, between the two groups, there appeared a man dressed as the Joker from Batman. He approached the police, turned to the protesters, and nervously raised his fist in the air, holding up a sign with his other hand that read, “No Justice, No Peace”, with a #BLM scrawled in a corner, almost as an afterthought. The man—he was white—was clearly nervous, his movements uncertain, his eyes darting around at the protesters as if searching out some kind of validation.

He stood there for a few minutes, sheepishly. No one paid him any attention. The police officers inched forward and then charged. The crowd scattered. The Joker dashed off down a side street and disappeared. 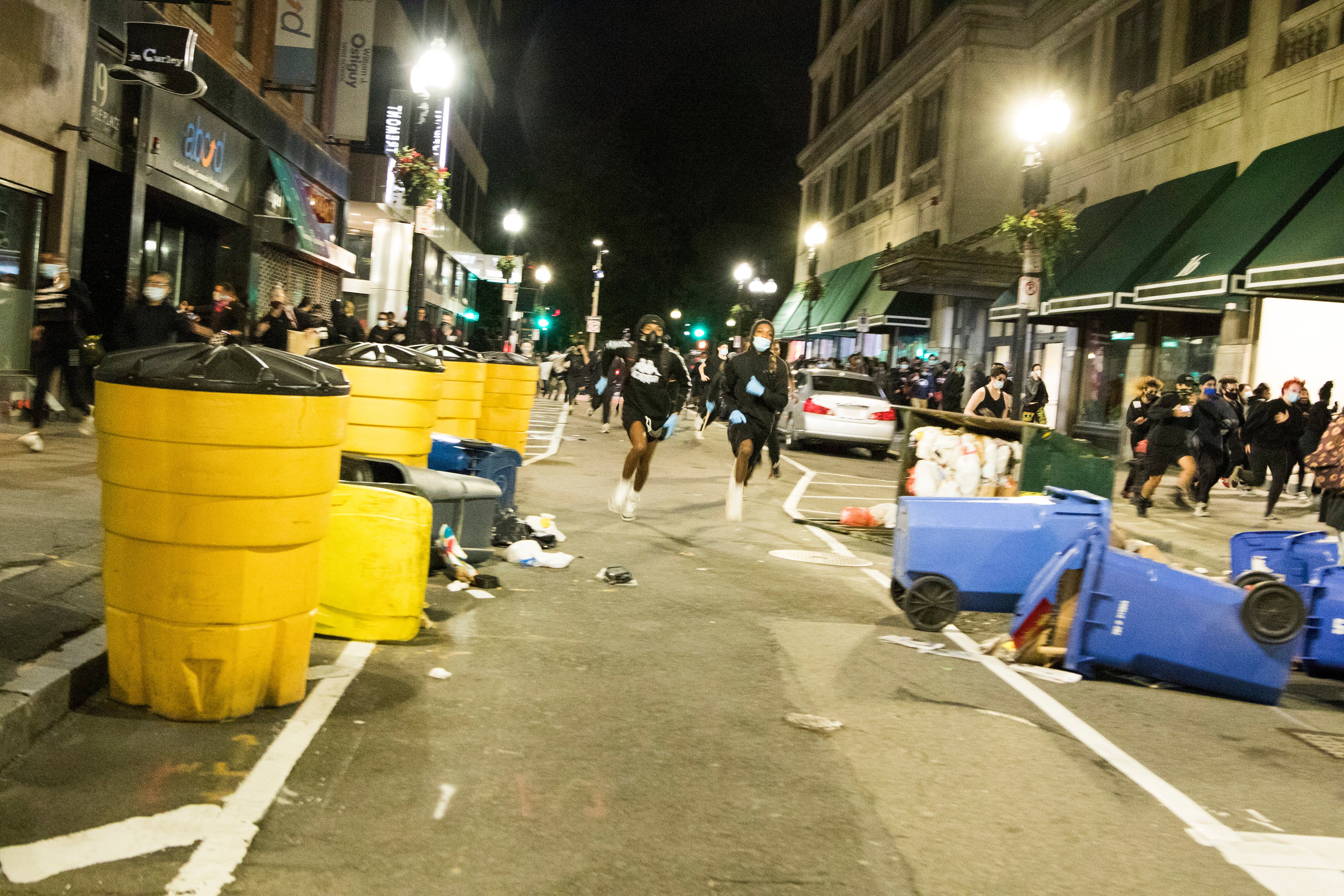 Boston, Mass., Black Lives Matter protesters run down a street in Boston on May 31 after police began firing tear gas and pepper pellets at them. Protests had been largely peaceful until heavy-handed police tactics turned them into running street battles. (Photograph by Adnan R. Khan)

It all felt contrived, even theatrical, and maybe that was the point. In the 2019 film Joker, which won Joaquin Phoenix the Oscar for Best Actor, the main character, Arthur Fleck, is an uncertain and shy nobody who the inequities of society transform into a cold-blooded killer. Indeed, the film was criticized for sympathizing with the kind of outcasts—angry white men like Elliot Rodger and Brenton Tarrant—who have, in the real world, turned their rage against society into terrorism.

But in the real world of anti-police protests, protesters were not interested in this joker’s theatrics. A few read the display for what it was: a naked attempt to provoke more violence. In the Batman universe, the Joker symbolizes absolute chaos, the nihilist who wants nothing more than to set fire to society and watch it burn.

But that was not what was happening in Boston, nor was it what was happening in New York, or Washington D.C., or Minneapolis, or dozens of other cities across America. Police vehicles, and at least one precinct, had burned, but those were not anarchic acts; they were acts of fury directed at a symbol of oppression in American society. The target was law enforcement as an institution, and attacking its symbols—not the police officers themselves—sent a clear message: the institution is the problem, not individual police officers.

To some, it may seem like semantics. Setting fire to police property is an act of wanton destruction; it is pointless rioting. But they are wrong. I witnessed pointless rioting on that first night of protests in Boston, from a few self-proclaimed anarchists—all white—who appeared more interested in stoking blind chaos than standing up for justice. I saw Black Lives Matter supporters, too, carrying out acts of violence. But their rage was different, more focused, a visceral outburst of pent-up frustrations directed at a system of law enforcement that has failed them.

“It’s enough,” one protester, who had smashed in the windshield of another police SUV, told me after I pulled him aside for an interview. “How many years have black people struggled for justice through the system? When you’re drowning in the ocean you don’t ask the water to help you; you struggle against it.”

With the passing of those initial days of rage, however, the protest movement has evolved into something more determined, and more peaceful. Acts of destruction have followed but they have been, like the destruction of police property, acts charged with meaning. Statues of historical figures who symbolize racism in its worst iteration, slavery, have been ripped down, both in the U.S. and the U.K. Streets have been spray painted with portraits of Floyd alongside calls to defund police forces.

It feels as if the moment for meaningful change has finally arrived. Over the past two weeks, those who have proved themselves to be extremists are the police forces themselves, and law and order politicians like Donald Trump who have a vested interest in the status quo. Their use of violence has been arbitrary and chaotic, purposeless, anarchic, or in the case of Trump, perhaps even fascist.

But what black activists and their allies face in America is a system built on racism that is much subtler and more deeply entrenched. Its very foundations are racist. Today’s police forces in formerly Confederate states in the south, for instance, evolved out of so-called “slave patrols” tasked not only with chasing down escaped slaves but also creating a sense of terror among African Americans that would deter slave revolts, according to a brief history of policing in the U.S. by Eastern Kentucky University.

In other parts of the U.S., policing grew out of wild west mythology that pitted the white lawman against the savage Indian, a vigilante image where the lawman is four parts warrior and one-part public servant, always willing to kill, rarely ready to negotiate (when did John Wayne ever de-escalate a confrontation?).

These foundational structures have, time and again, produced negative outcomes for black communities. Stretching back at least a century, Americans have been confronted with the reality of racism and violence in its police forces. In the aftermath of the Chicago race riots in 1919, for instance, an official investigation found that “arrests made for rioting of…colored rioters were far in excess of the arrests made of white rioters”, demonstrating an impartiality among police officers that served to “further incite and aggravate the colored population.”

The report went on to accuse the police of tampering with evidence and ultimately concluded that to “prepare for the future”, the police force needed urgent reform.

Reform, of course, never happened. Less than two decades later, a report on the 1935 riots in Harlem also faulted the police for excessive use of violence against black protesters, and again in a report on riots in 1943. After another round of race riots in 1967, Kenneth Clark, the ground-breaking psychologist and early researcher of structural racism, told another commission that “it is a kind of Alice in Wonderland—with the same moving picture re-shown over and over again, the same analysis, the same recommendations, and the same inaction.”

The reality black Americans face is that nothing will change unless everything does. The American justice system is a complex web of alliances between white powerbrokers, from prosecutors who rely on police cooperation in their investigations, to police unions that wield influence over elected local officials to elected judges who only answer to their white constituencies. To change the system will mean dismantling all of it.

As for police forces themselves, it’s no exaggeration to say that many are plagued by violence and racism, fed by distorted images of what a good police officer is supposed to be. Hollywood gets some of the blame here for lionizing the rule-bending, macho renegade cop. But the problem runs much deeper.

It’s also partly social: police forces appear to attract violent, mostly white, men. Multiple studies have found that domestic violence among police officers is substantially higher than the general population. And toxic masculinity, according to another researcher,  is not only rampant among police officers but institutionally supported through hiring practices.

A part of me wonders if it will ever change. Can the stain of racism ever be washed away in a nation that was built by slavery? Can law enforcement and judicial institutions premised on the myth of keeping white Americans “safe” from African Americans be reformed, or do they, as the Defund movement argues, need to be torn down wholesale and rebuilt anew?

Barack Obama, unsurprisingly perhaps, believes change is possible. “When sometimes I feel despair,” he said during a virtual town hall last week, “I just see what’s happening with young people all across the country—the talent and the voice and the sophistication that they are displaying—and it makes me feel optimistic. It makes me feel as if this country is going to get better.”

He’s right: After all the protesting and activism, young black Americans are smarter than ever, more savvy, more determined, and more united. Young white Americans are starting to wake up to how deep institutional racism runs in their society. And they are offering to be allies.

The extremists among them, on the other hand, are worried. You can see it in the nervousness of that Joker character in Boston. You can read it in Trump’s progressively unhinged tweets. You can sense it in the way his Republican lackeys are scuttling away from tough questions, mumbling to themselves.

They are flailing. They will fail.