Who will replace David Cameron? 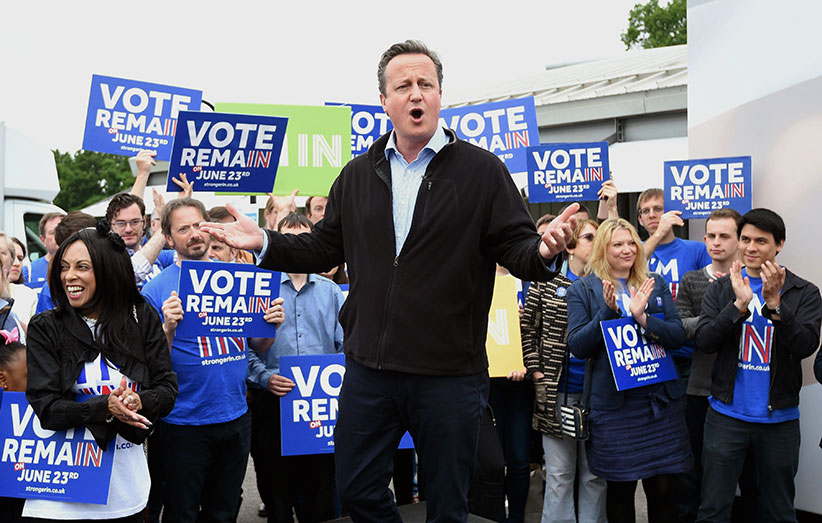 British Prime Minister David Cameron and Mayor of London Sadiq Khan (not seen) greet supporters during the launch of the battle bus for the ‘Remain In’ campaign May 30, 2016. (Facundo Arrizabalaga/EPA/CP)

LONDON — An intense leadership battle is expected to unfold within Britain’s Conservative Party after its long-standing, passionate split over the country’s role in Europe reached a pinnacle Friday with a vote to exit the bloc and the resignation of the prime minister.

The still youthful-looking David Cameron announced he would step down after Brits rejected his plea to vote to keep Britain inside the European Union, setting in motion complex divorce proceedings expected to take two years or more to work out.

David Cameron on Brexit results: ‘We trust the people’

Speaking in a stoic tone, with his wife, Samantha, standing nearby, Cameron said Britain needs a new “captain” to manage torturous negotiations with EU officials about how to separate Britain from the 28-nation bloc.

Strong disagreements over Britain’s place in Europe helped undercut the party support for the last Conservative prime minister, John Major, and before him Margaret Thatcher. She was removed by internal foes, as was Cameron, in effect, while Major lost a 1997 general election in part because party unity had become illusory because of a split over Europe.

There was an element of Shakespearean tragedy over the resignation of Cameron, 49.

The often cheerful prime minister, who had seemed to live a charmed political life, was laid low not by his enemies — and certainly not the often ignored Labour Party leader Jeremy Corbyn, who faces a nascent leadership challenge of his own.

Instead, his fate was sealed by two former close friends within the Conservative Party who helped lead the campaign to leave the EU: Oxford University mate Boris Johnson and close family friend Michael Gove.

The Cameron and Gove families used to vacation together and Gove’s wife is the godmother to one of Cameron’s daughters, but their friendship dissolved in the clash over the referendum.

On Friday, Johnson and Gove had only praise for Cameron when they made a joint appearance lamenting his decision to step down — but by then, they had already, politically speaking, buried him.

Cameron said Friday a new prime minister should be in place by a party conference in October. That means the party must choose a leader, who would become prime minister.

Among the possible contenders are Johnson and Gove, as well as Home Secretary Theresa May.

Johnson didn’t utter a word Friday about whether he would become a candidate for the party’s top spot. He called his old university classmate “one of the most extraordinary politicians of our age” and commended Cameron’s “bravery” for calling the referendum.

Political analysts and commentators have consistently said Johnson hoped to use a vote in favour of a British exit from the EU, or Brexit, as a launching pad for national leadership.

The result of the referendum caused some resentment from Britons who wanted to stay in the EU about the way a dispute between the elite-educated Cameron and Johnson ended with a British decision to withdraw from the bloc. It was Cameron who called the referendum, to quell party conflict, and Johnson whose charisma helped lure voters away from the EU.

“I am very unhappy about it,” said Richard Aczel, who teaches English literature in Germany. “I was born and bred in Britain but I am also a European. I am sick that two upper class twits from Eton have torn our country apart and I feel ashamed.”

Other Cabinet members are likely to contend for the leadership as well. However, Treasury chief George Osborne’s chances seem damaged by the Brexit vote as he had argued strongly in favour of remaining in the EU.

He had been considered to be in a strong position before the campaign to stay inside the EU faltered in the last two weeks.

Conservative Party rules call for the party’s members of Parliament to choose two candidates through a series of ballots, and then the entire party’s membership will choose between those two.

If only one candidate surfaces by the close of nominations, he or she is declared the leader and the choice then must be ratified by the party membership as a whole.

Defence Secretary Michael Fallon said it is too soon to speculate about who will replace Cameron, who became party leader in 2005 and led the party to two general election victories.

“I think it is a bit too early to start speculating about that,” he said. “There is plenty to do now to help make this decision work, to stabilize our economy, to reassure our allies and to continue the program we were all elected on last year.”

He said Cameron has done the honourable thing by resigning.

Cameron had been expected to serve several more years but the referendum result made his position untenable. He was re-elected last year with a majority vote but lost control of the debate on the EU.