Who's really watching out for sled dogs? 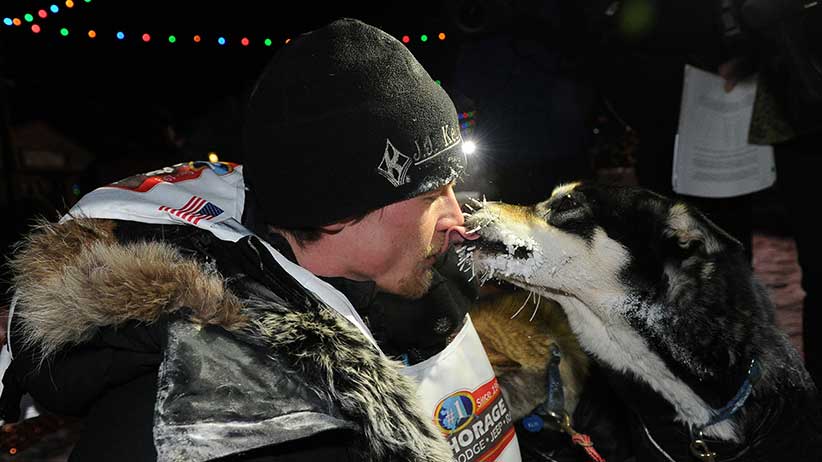 Dallas Seavey gets a kiss from one of his dogs after crossing under the burled arch in Nome, Alaska, to win the 2014 Iditarod Trail Sled Dog Race on Tuesday, March 11, 2014. (Bob Hallinen/Anchorage Daily News/MCT via Getty Images)

Early in October, organizers of the Iditarod Trail Sled Dog Race, which runs 1,600 km from Settler’s Bay to Nome, Alaska, revealed four dogs from one competitor in last March’s race—identified only as “Musher X”—were found to have the race-banned opioid painkiller Tramadol in their systems. It was the first case of dog-doping since the Iditarod began testing dogs in 1994.

By the end of October, race organizers finally identified Musher X as Dallas Seavey, a four-time Iditarod champion who is part of a dynasty stretching back three generations. His name attached to the doping scandal sent the sport into a frenzy of accusations, turmoil and controversy pitting rival mushers against each other and animal rights activists.

Last year Seavey, 30, finished second in the Iditarod, just a few hours behind his father Mitch. Both in television interviews and in a nearly 18 minute-long YouTube video, Seavey vehemently denied he drugged his dogs.

Many people involved in the sled dog world, including veterinarians, fans and mushers, believe Seavey, who would have known that all top-20 finisher’s animals in the Iditarod are tested for banned substances soon after they reach Nome.

“All I can say 100 per cent is I did not give this to my dogs,” he told Alaska’s KTVA 11. “So now we have to look at the other possibilities.” Seavey has chastised the Iditarod’s governing body for failing to provide sufficient security to prevent someone from giving sled dogs spiked treats or to prevent the tampering of food and water left along trail drop-off points in the weeks before the race.

RELATED: As B.C.’s wildfires raged, these sheepdogs stayed to protect their flock

He also floated the possibility a jealous competitor or animal rights groups, which have called for an end to all sled dog racing, might have hoped to disgrace the event by slipping Tramadol to his dogs. (Tramadol might relieve an animal’s aches, but it would also make them slow and drowsy, he has said.) “I apologize to my fellow mushers that this race is about to hit a very rough patch,” he continued in his television interview.

And so it has. As part of the fallout of the Seavey controversy, one veteran Iditarod competitor slated to race this March, Zoya DeNure, incensed fellow mushers in an Oct. 25 blog post when she accused the Seavey family of killing numerous huskies over the decades simply because they weren’t fit enough to win races.

She claimed she’d heard such stories over the past 10 years when interviewing former Seavey kennel employees she was considering hiring. The culling “seems to be common place among other fellow racing competitors,” added DeNure, who was attacked on social media by many Iditarod fans using the hashtag #IStandWithDallas.

Jennifer Seavey, Dallas Seavey’s wife, replied on her husband’s Facebook page that DeNure’s posts are “unequivocally false.” The Seaveys run Iditarod Experience Tours near Willow, Alaska, and keep about 90 dogs at two separate kennels. “These atrocious accusations from out of left field are shocking and disgusting.”

Alasakan officials inspected Seavey’s 89 dogs in early November, after receiving a separate complaint about animal abuse. “Based on the evidence I have—I did a hands-on thorough inspection of their facilities, and checked every dog and puppy on the properties—I didn’t find anything,” Matanuska-Susitna Animal Care Officer Nick Uphus told Maclean’s.

In an email to Maclean’s Mitch Seavey’s son Danny says unsubstantiated allegations of animal abuse or dog culling are “adding to the fake news” about sled dog sports and commercial operations. Danny Seavey said that to those uninitiated in sled dog behavior and training, some kennel practices can seem harsh. “As for allegations of kicking or beating: While it’s not something I would condone, It’s probably true… the reason sled dogs are not kept in large pens where they can play is that they will very literally kill one another. For everyone’s safety, the musher has to immediately diffuse growls and other displays of dominance before they turn into brawls. Sometimes that requires force, with whatever means are available.”

Danny also said his father’s kennel has well-defined written parameters for dog discipline. “Handlers may not EVER strike a dog in anger (both Dallas and our kennel released employees in the past year for a single violation of this rule), and may only strike a dog to break up a fight. Sometimes this can be shocking if you’ve not seen the consequences.”

When documented cases of individuals mistreating sled dogs have occasionally been found in the mushing world, says Seavey, “they have been promptly banned from the sport, starting long before animal rights organizations came along.”

The accusations around the sport have also been lately fuelled by a harshly critical documentary about sled dog racing called Sled Dogs. It was released in September and featured scenes of miserable looking dogs chained 24/7 to stakes in the off-season and living in plastic barrels that often serve as dog-houses at musher kennels. In November, ABC’s Nightline ran a report on sled dog abuse in North America based largely on Levitt’s film.

“We need to look at what is going on in our own country,” says Fern Levitt, the Canadian filmmaker behind the documentary. Aside from filming questionable kennel conditions in states like Alaska and Colorado, Levitt also shot in Barrie and Huntsville, Ont., and in Whistler, B.C. It was there, in January 2011, that 100 sled dogs and puppies were slaughtered when business slowed down after the end of the 2010 Olympics.

The anti-sled-dog racing activists have been having an impact on the Iditarod. One major sponsor, Wells Fargo, pulled its sponsorship of the 2018 Iditarod race after a PETA campaign.

On Dec. 1, the Iditarod Trail Committee announced it was setting up a special advisory committee to develop a “best care” kennel management program. Mushers wishing to compete in the 2019 Iditarod will be required to meet higher standards of care in shelters, tethering dogs, nutrition and other areas. Kennels will be inspected and must be certified before a musher can enter the Iditarod.

Chas St. George, the Iditarod’s operations director, told Alaska Public Media that, in part, it began the new kennel management program to counter negative press and sentiments about the race after Levitt’s film. Levitt said she sees the announcement as a “smoke screen. If they really cared about these dogs, better kennels would have been required a long time ago.”

Canadian musher Jason Campeau finished 18th in the Iditarod two years ago. Along with his wife Jennifer, he raises and races sled dogs out of their kennel in Rocky Mountain House, Alta. Campeau says Levitt’s film focused on just the most isolated and extreme examples of neglect. “They have no idea what they are talking about when they start trashing the sport,” says Campeau. “Our dogs, every day they get out and play,” he says. “They are way more active than any dog.”

The “unreal” bond between mushers and their dogs is difficult for most outsiders to understand, says Campeau, the executive vice-president of an IT company. He has a dog, Spider, who watches Hockey Night in Canada with him every week. “That dog has saved my life three times in the past year. I am not kidding.”

On one occasion, descending down the notorious Eagle Summit pass during last year’s Yukon Quest, Campeau’s sled hit glare ice. Jumping off to help his slipping and sliding dogs, he was knocked out cold. “Spider was on top of me licking me when I came to. If he hadn’t done that, I don’t know how long I would have been out there,” says Campeau.