Why do terrorists target airports so frequently?

Security expert Brian Michael Jenkins on why terrorists are drawn to airports, and the massive cost of even a failed attack 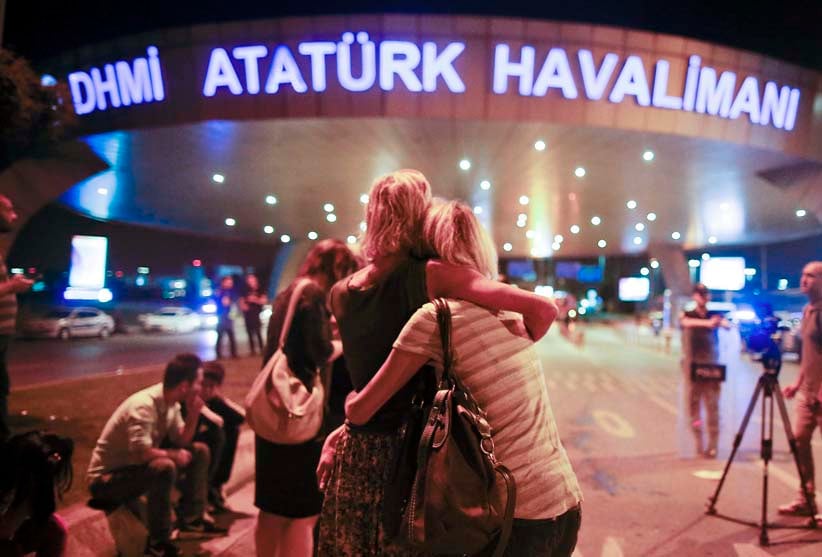 Passengers comfort each other after being evacuated from Istanbul’s Ataturk airport, hit by multiple suicide bombers (Emrah Gurel/AP)

On May 30, 1972, in one of the earliest attacks on airport passengers, three members of the Japanese Red Army strolled through the Lod Airport in Israel, pulled out hand grenades and machine guns, and killed 26 people—injuring another 78. Since then, terrorists have carried out scores of attacks inside airports; over the last year, several higher-profile events include the bombings inside the Brussels airport that killed almost a dozen would-be flyers waiting at check-in lines; a series of bombs and shootings inside Istanbul’s Ataturk airport that killed dozens; and most recently in Fort Lauderdale, a gunman killing five before surrendering to police.

Terrorists and gunmen inflict chaos on a variety of targets, but we asked Brian Michael Jenkins, senior adviser to the president of research organization RAND Corp.—and author of The Long Shadow of 9/11: America’s Response to Terrorism—why airports are targeted so frequently. As he tells Maclean’s, airports “remain an obsession with terrorism, a venue of choice.”

Why? Here some of Jenkins’s reasons and hypotheses:

Operations: “As security for airliners increased in the realm of terrorism, it’s interesting to note that terrorists can’t easily get at the airplanes, but they can still get at an airport’s publicly accessible areas—check-in counters and baggage claim.

“These are assemblies of people, crowds in confined environments and easy to access. It makes them an ideal killing field. For those who are concerned about carrying out bombings, the fact that people arrive with large suitcases enables someone to walk in with a large bag carrying an explosive device and it attracts no suspicion.”

Prestige and attention: “For some people an airport venue—even though they could do the same thing in a shopping mall or supermarket or any public space with a lot of people—has some special meaning.

“It’s like asking why do people who commit suicide jump off the Golden Gate Bridge? There are lots of bridges and tall buildings in the San Francisco Bay area. It takes an ordinary mass shooting and takes it up a level, because it’s done in this venue that gets a great deal of attention.

“All other things being equal, such as number of casualties, terrorist events at airports get more national and international attention than terrorist attacks at other venues—unless they are [dramatic] like the truck plowing into people in Nice.”

Targets: “It may be that the target at the airport is specific nationalities or ethnicities. There was certainly that aspect in the 2002 shooting at the Los Angeles airport—an Egyptian limo driver opened fire at the check-counter for El Al [Israel’s national airline].”

Scare away tourists, ruin country’s economy: “Tourism in Turkey has plummeted. For countries where tourism represents a significant contribution to the GDP, like Egypt or Tunisia, airplane and hotel attacks can devastate the economy. It’s pretty effective in terms of economic warfare.”

The cost of security: “The underwear bomber’s device failed. His total investment was probably $5,000. And yet, in response, the United States spent close to a billion dollars deploying full-body scanners. One shoe bomber—again, whose bomb failed—resulted in altering security procedures for airports around the world: they make us take off our shoes.

“One attack on one airport in the United States obliges the authorities to increase security at 450 commercial airports. In other words, it’s not the magnitude [of the attack] that drives the diversion of resources to security, but rather the volume and magnitude of targets to be protected.”

Psychological effects: “It touches a nerve with people’s psychological reactions more than other [attacks] … People are talking about the need to protect airports—not just airplanes—and create security perimeters at the front doors of the airport, not at the corridors of the doors leading to the planes. We’ll move to a situation where people see armed guards and automatic weapons. On one hand, that may be reassuring, but on the other hand it’s a reminder that nothing is safe.”