Why is Canada so weak on Russia?

Corruption and murder have drawn Russians into the streets. Meanwhile Canada is still dithering and delaying over basic sanctions. 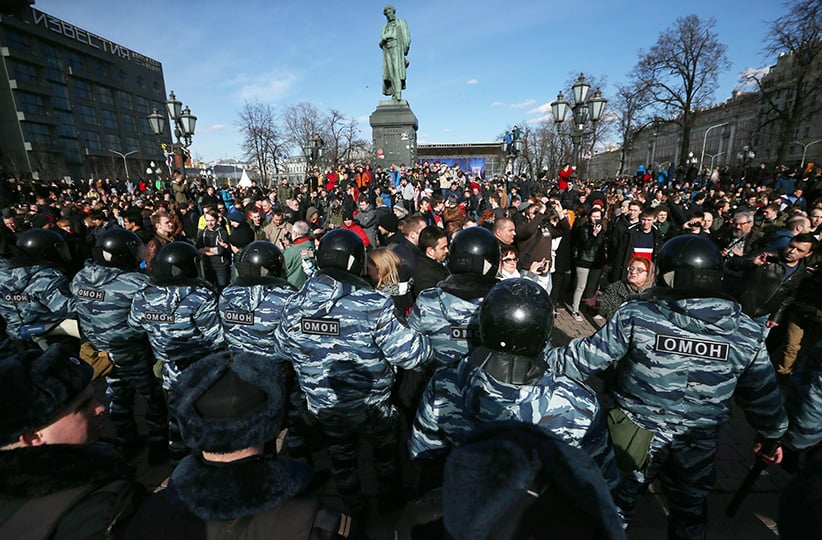 In the largest and most raucous protests against Russian strongman Vladimir Putin since the rigged elections of 2012, tens of thousands of demonstrators poured into the streets of at least 80 towns and cities across Russia over the weekend. From Vladivostok on the Pacific coast, through major cities like Novosibirsk and Yekaterinburg all the way to St. Petersburg where the 1917 Russian revolution kicked off a century ago, the protestors marched and chanted. Russia will be Free. Putin is a Thief. Sell your Villas, Build Roads. Down with the Czar.

You’d never know it from the Kremlin’s propaganda channels, though. The Rossiya 24 network carried the latest developments in Ukraine’s objections to the Russian entry in the Eurovision song contest, and news about a volcano erupting in Kamchatka, and a shooting at a nightclub in Cincinnati, Ohio. “A runaway cow in America got more coverage than the mass protests in Russia,” noted Mark Galeotti, coordinator of the Centre for European Security at the Institute of International Relations in Prague.

READ MORE: Vladimir Putin: The return of the czar

Reporting the news in Russia is a dangerous vocation. At least 13 journalists were roughed up and arrested covering Sunday’s protests. The Committee to Protect Journalists counts at least 22 reporters murdered since Putin first took power 17 years ago. It’s no safer being a Russian justice activist or an opposition politician. Two years ago, the great reformer Boris Nemtsov was murdered just a short walk away from Red Square in Moscow. Last month, Vladimir Kara-Murza, chairman of the Nemtsov Foundation, fell into a coma after being poisoned.

Last Thursday, the former Russian lawmaker Denis Voronenkov was gunned down in broad daylight in an execution-style assassination in the streets of Kyiv. Voronenkov fled to Ukraine last year to help build a treason case against ousted president Viktor Yanukovich, a grotesquely corrupt Kremlin marionette.

Last Tuesday, the lawyer for the family of murdered whistleblower Sergei Magnitsky either fell or was pushed from a fourth-story apartment building in Moscow. The lawyer, Nikolai Gorokhov, remains in hospital with serious head injuries. He was due in court last Wednesday at a hearing related to the $230 million tax fraud Magnitsky had exposed in 2009 before he was arrested and tortured and left to die in prison.

This is the scale of corruption and the degree of impunity that drew all those protestors into the streets on Sunday. At least 500 protestors were thrown in jail, including the popular opposition politician Alexei Navalny and the entire staff of his Anti-Corruption Foundation. Navalny is banned from state television, so he has used social media to publicize his foundation’s investigations.

Navalny’s most incendiary work, downloaded from YouTube nearly 13 million times, purports to show the palaces, yachts and lush properties Putin’s prime minister, Dmitry Medvedev, has lately acquired in bribes and kickbacks. One such property is a $470 million, 160-hectare dacha with its own marina, ski slope, and three helipads. Navalny’s researchers say Medvedev has used his office to enrich himself by more than $1.25 billion while Russia’s economy has shrunk to the size of Italy’s.

Foreign Affairs Minister Chrystia Freeland this week vowed to continue to hold firm on Canada’s Russia sanctions until Putin fully complies with the 2014 Minsk agreements, which oblige Russia to back off its military adventure in Ukraine’s Donbass region, where 10,000 people have died owing to Putin’s deployment of heavily-armed proxy separatists.

MORE: How Russia’s attack on Freeland got traction in Canada

“We will continue to put pressure on Russia, including with the help of existing sanctions, until the Russian Federation fully fulfills its obligations under the Minsk agreements and uses its influence on separatists to force them to fulfill their obligations,” Freeland said.

Russia is largely ignoring its Minsk commitments. And in any case the Minsk agreements are pretty well silent on Crimea, which Russia invaded and annexed three years ago. Earlier this month, the European Union issued a damning declaration on Russia’s conduct in Crimea, especially its persecution of the minority Crimean Tatars.

But Canada remains a laggard in the use of sanctions to target Russia’s thugocracy. In 2012, the U.S. Congress adopted the Magnitsky law, which specifically sanctions the Russian officials involved in the tax fraud Sergei Magnitsky uncovered and the officials responsible for his torture and death. Last November, the U.S. Magnitsky laws were “globalized” to potentially target any human rights abuser, and the United Kingdom followed suit last month.

Following the timid policy set by former foreign minister Stephane Dion, Canada continues to dither, discuss and delay, even though $14 million in dirty money linked to the swindle Magnitsky discovered has already found its way into Canadian bank accounts.

Support for a Canadian version of a Magnitsky law was pledged by the Liberals, Conservatives and New Democrats during the 2005 election campaign, but the whole matter of how Canada imposes sanctions remains hung up in going-nowhere committee hearings into the Special Economic Measures Act and the Freezing Assets of Corrupt Foreign Officials Act, two preposterously cumbersome and contradictory statutes that haven’t been properly updated since 1992.

This is an international embarrassment. If Prime Minister Justin Trudeau means what he says “on the world stage” about Canada’s commitments to the rule of law, to multilateralism, to the cause of democracy and a functioning international order, then his government should start proving it.

Down with the Czar.