Why ISIS is more dangerous than ever

The Islamic State is on the road to collapse and is now lashing out. Will the West take its bait? 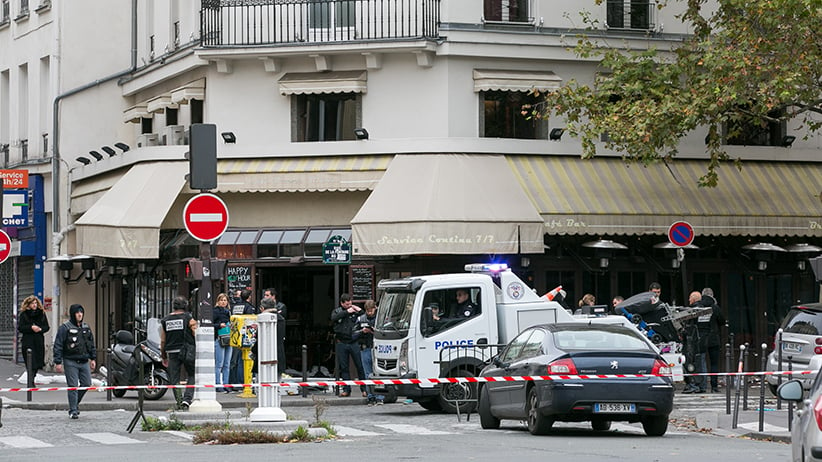 PARIS, FRANCE – NOVEMBER 14: Police officers are seen near the ‘Le Phare du Canal’ restaurant after a terrorist attack on November 14, 2015 in Paris, France. At least 120 people have been killed and over 200 injured, 80 of which seriously, following a series of terrorist attacks in the French capital (Marc Piasecki/Getty Images)

Parisians awoke this morning in a daze after the worst night of violence the city has experienced since the Second World War. It was, according to one resident who spoke to Maclean’s by telephone, horrific. “It felt like the entire city was under seige,” Romana Hanif said. “Everyone I know locked themselves in their homes and followed the events on television.”

A day later, many of those people are still staying home. In the aftermath of a coordinated terrorist attack claimed by the self-styled Islamic State, a metropolis famous for its street life has retreated into itself, searching out safety in the deadbolt privacy of homes and apartments.

“I went out this morning and there were only a few people on the streets,” Christophe Bardeche, another resident told Maclean’s via Facebook chat.  “Place de la République has more police than civilians.  Gatherings and all demonstrations are forbidden.”

According to French media, the death toll could have been much worse. Two of the attackers were both headed to a soccer match between France and World Cup champions Germany, attended by French President Francois Hollande. Both had tickets to the match but were stopped by security before they could enter the stadium.  The two then fled, detonating their suicide belts outside of the stadium, killing at least three people.

Still, the extent of the damage, beyond lives lost and those permanently maimed, has been devastating for a nation reeling from earlier attacks, including the storming of the offices of satirical magazine Charlie Hebdo and a Jewish bakery in January.

But this time, something was different. The scale and coordination has prompted some harsh language from the French president. “We will be merciless toward the barbarians of Islamic State group,” he said, adding that the attacks were an “act of war” and France would take “appropriate action.”

What that response would be remains unclear.  France has been an active participant in the bombing campaign targeting Islamic State in Iraq and Syria. In recent months, that campaign has begun to take its toll on the group, which may help to explain why it is now changing strategy and focusing on targets abroad.

The Islamic State as a territory is on the road to collapse. This past summer saw a number of key developments that weakened the group considerably, including Kurdish advances in northern Syria that severely curtailed its access to the outside world. More recently, Kurds in Iraq retook Sinjar, a city in the northwest where the minority Yazidi people were systematically slaughtered and enslaved by Islamic State earlier this summer, while opposition forces in Syria have made advances against the group and are reportedly on the verge of retaking Palmyra.

The victories have put Islamic State on the back foot, cutting off key supply routes and diminishing its capacity to replenish its numbers with new recruits. Next in the crosshairs for the anti-Islamic State coalition are Ramadi, which fell in May, and more critically Mosul and Raqqah, the two major cities controlled by the group. Their liberation would surely mean an end to the self-declared caliphate.

The attacks on Paris fit a pattern. On Oct. 31, an Islamic State affiliate took responsibility for downing an Egyptian passenger jet flying mostly Russian tourists home from the resort town of Sharm al Sheikh. Investigators now believe a bomb downed the airplane, killing all 224 on board. On Nov. 12, two suicide bombers reportedly dispatched by Islamic State killed 43 people in Beirut.  In Turkey, two attacks claimed by the group over the past few weeks have killed dozens more. Both were suicide bombings.

Internationalizing the jihad appears now to be a key Islamic State strategy. Their tactics recall a more classic terrorist approach, similar to what al-Qaeda has used in the past: target the enemy at their home to instil terror and provoke a disproportionate response. In the case of France, jihadists have history on their side. France’s Muslim community, the largest in Europe, has complained for years of economic and social marginalization. Riots in Parisian suburbs in 2005 pitted mostly North African Muslims complaining of systematic economic marginalization against the city’s security forces and left many neighbourhoods looking like war zones.

Since then, not much has improved. Young Parisians of Muslim descent still complain of deep-rooted prejudice in French society against their faith.  “I am Muslim, but the French authorities tell me that I can’t be both French and Muslim,” Abdullah, an unemployed 25-year-old told Maclean’s in 2011, providing only his first name and echoing complaints heard throughout the Parisian suburbs. “They don’t allow me to succeed and be part of society if I express my faith too strongly. So I have to choose.”

Unsurprisingly, France has provided the most foreign recruits to Islamic State of any European nation. By attacking the country so spectacularly, Islamic State hopes to recruit even more, some terrorism experts believe. A reactionary response based on fear—more crackdowns on Muslims, for instance, or a heavy handed response in Syria and Iraq that kills a large number of civilians—will push more people into the arms of jihadists, they warn.

For now, it seems fear remains a potent force in Paris. Police are on edge, at one point clearing the area around the Eiffel Tower and surrounding a luxury hotel before giving the all-clear sometime later. Residents are staying home and Hollande is talking revenge on a grand scale.

For Islamic State, it must seem like the enemy has taken the bait. A desperate group has lashed out in desperation in the hopes that the response will provide them with sustenance. How France, and the international community, reacts will determine just how successful they were.

Photo gallery: Mourning in Paris on the morning after