Why recent terror attacks are sparking fears of a new 'intifada'

Israel's control of the Holy City is more secure than ever. But recent terror attacks there have ratcheted up tensions. 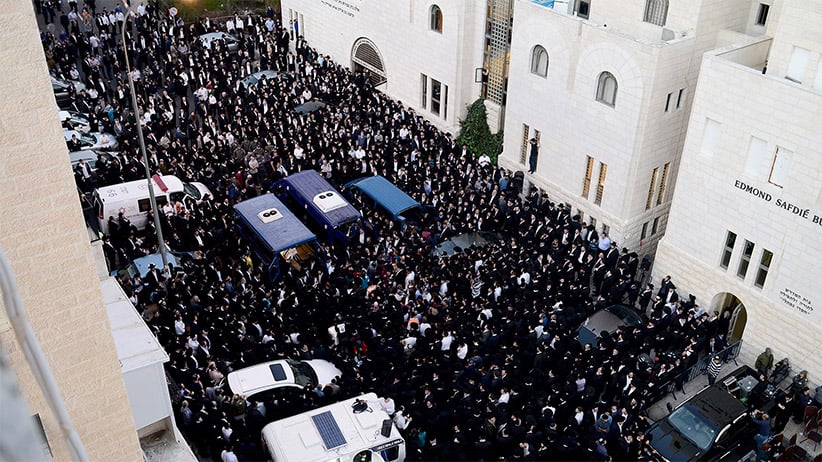 After a deadly rampage by gun- and knife-wielding Palestinians in a synagogue killed four rabbis and a policeman, Israelis are in “a battle for Jerusalem,” said the country’s prime minister, Benjamin Netanyahu.

If his rhetoric was overheated—Israel’s control of the Holy City is as secure as it has ever been—the metropolis claimed as a capital by both Israelis and Palestinians is nevertheless in the midst of the worst violence it has suffered in years. A series of Palestinian attacks, including one in which a car was intentionally driven into a crowd, killing a three-month-old girl, have raised tensions in the already divided city and have led some to worry that a third Palestinian intifada, or general uprising, may be beginning.

Netanyahu, in an address following the synagogue attack, said there is “daily, even hourly, incitement” against Israel from Palestinian Authority-controlled territory. In an interview, Netanyahu spokesman Mark Regev said the prime minister was not accusing Palestinian Authority President Mahmoud Abbas of ordering or desiring terrorist attacks, but said his words have “contributed to an atmosphere of violence that is ultimately stirring recent attacks.”

Regev specifically accused Abbas of giving credence to “baseless” accusations that Israel is plotting to change the status quo of the Temple Mount, known to Muslims as the Noble Sanctuary. The Jerusalem compound contains the al-Aqsa Mosque and is the site of Judaism’s Second Temple. Non-Muslims currently have limited access to it, but there is a campaign by some right-wing Israelis to change this so they can visit more frequently and openly pray there. Regev says Netanyahu has made an “ironclad” commitment to prevent that.

The status of the Temple Mount, however, is only one factor in a steadily deteriorating relationship between Israelis and Palestinians. The latest round of U.S.-brokered peace talks collapsed in April. Three Israeli teenagers were abducted and murdered in June, followed by the revenge lynching of a 13-year-old Palestinian boy who was burned to death. A summer war in the Gaza Strip—that also involved Palestinians firing missiles into Israel—then killed more than 2,000 Palestinians and 71 Israelis, plus a Thai national. It seems as though Israelis and Palestinians have been slipping deeper into a chasm for months.

“We unequivocally condemn all violence against civilians,” said Said Hamad, chief representative of the Palestinian General Delegation in Canada, in  a statement offering condolences to the families of victims in the synagogue attack. He said the attack, as well as recent arson attacks against mosques—and what he described as “raids” by Israeli settlers and security forces on the Noble Sanctuary—“represent violations of the fundamental tenets of Islam and Judaism.”

Although Regev blamed Palestinian leaders for spreading lies about Israeli intentions concerning the Temple Mount, he also said he didn’t believe recent attacks in Jerusalem were a reaction to any Israeli policies, instead, linking them to radical Islam, including as practised by extremists outside Israel, such as Islamic State, which has taken over large chunks of Iraq and Syria.

“There’s nothing political about it. It’s hatred. It’s extremism,” he said, noting that the weapons used by the synagogue attackers—knives—were the same ones used by Islamic State to behead its captives. “The real challenge we’re all facing, Canada and Israel, is this resurgent Islamist extremism. The same people who are causing problems in Jerusalem are the same people in Syria and Iraq. It’s the same radical, extreme theology. This is not just a regional problem. It’s a global problem.”

Khaled Elgindy, a fellow at the Brookings Institution who has previously advised the Palestinian leadership on negotiations with Israel, says attributing the attacks to religious extremism is an Israeli tactic to avoid confronting legitimate Palestinian political grievances that fuel anger and, ultimately, violence. “That’s not to justify it; that’s only to understand it and explain it,” he says. “If we bury our heads in the sand and say there’s no real cause of conflict here except the other side’s irrational hatred, we’re going to perpetuate the conflict.”

Palestinians in East Jerusalem are especially frustrated, he says. The Palestinian Authority doesn’t operate there. Residents are discriminated against by the Israeli government that controls them. “[East] Jerusalem is a wasteland,” he says. “I think people have no idea what a backwater it has become, economically.” Palestinians living there are poor, often prevented from easily visiting family in the West Bank because of Israel’s security barrier, and are increasingly angry, as Jewish Israelis move into their neighbourhoods or build homes in areas where they are routinely denied permits to do the same. Abu Ali, the father of one of the synagogue attackers, told the BBC, “This is a religious war.”

Related reading: Is the dream of Israel-Palestine peace dead?

Shlomo Brom, a visiting fellow at the Center for American Progress and a former brigadier general in the Israel Defense Forces, agrees that religion has become a more prominent factor in the Israeli-Palestinian conflict—with religious nationalists also exerting greater influence on Israeli domestic politics. But he says the primary factor fuelling recent violence is “the general frustration and lack of hope” among Palestinians. He believes a continued escalation of violence might be avoided if even limited political progress can be made that might convince Palestinians a negotiated settlement leading to the creation of a Palestinian state is still attainable.
Brom says there are differences between the current unrest and the uprisings of 1987 and 2000. Earlier intifadas, he says, included more political direction. Most of these recent attacks, he says, were carried out by people acting on their own initiative—“what we used to call popular terror, not organized terror.”

Another key difference is the location of the violence and the origins of its perpetrators. The second intifada, from 2000 to 2004, grew out of the West Bank, with Palestinians from the territory striking into Israel proper. The current unrest is, so far, mostly restricted to Jerusalem. The West Bank is generally calm.

That recent attacks do not appear to be part of an organized campaign may seem like a source of small comfort to Israelis, says Elgindy. But he says a wave of random, self-directed attacks may actually be worse, “because an intifada, you can negotiate with. It has political demands, it has a political address. This does not.”