Groups like Islamic State and al Qaeda operate like cults, and that's why assassinating their leaders works 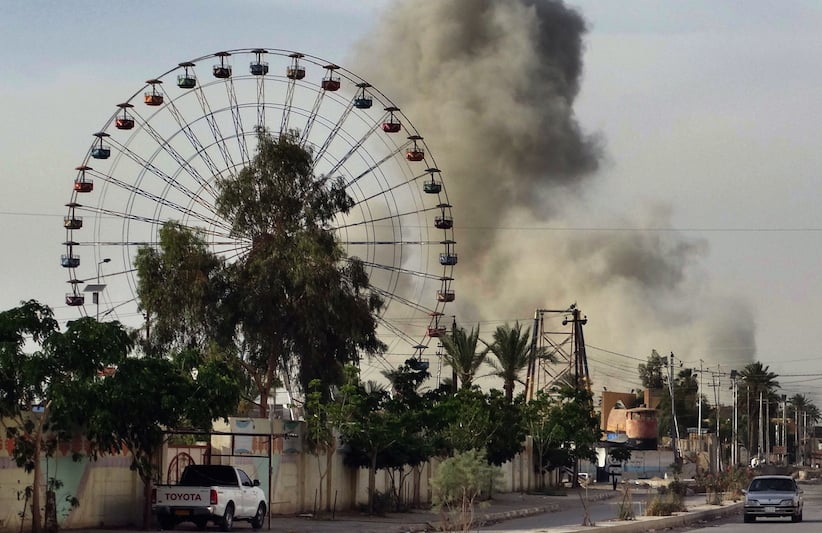 A plume of smoke rises after an airstrike by the U.S.-led coalition against Islamic State group positions in an eastern neighborhood of Ramadi, Iraq (AP Photo)

Iraqi military leaders reported this week that the deputy head of the group calling itself the Islamic State was killed in a U.S.-led airstrike. If confirmed, Abu Alaa al-Afri’s death would be the latest in a string of high-profile killings of militant leaders around the world and could seriously disrupt Islamic States operations, some experts say. It follows a report that the group’s leader, Abu Bakr al-Baghdadi, was seriously injured in another airstrike in March.

According to the Iraqi Ministry of Defense, Afri, who had reportedly taken over as temporary head of Islamic State while Baghdadi recovered, was killed while meeting with senior Islamic State commanders in a mosque in the western city of Tal Afar, near the Syrian border. It’s unclear whether he was the target of the attack.

If he was, it would indicate that the controversial U.S. strategy of targeted killings remains in place despite opposition from rights groups and some U.S. lawmakers who complain that the program’s lack of oversight and transparency makes it a legal ticking time bomb.

According to White House officials, the program, which includes drone strikes and kill/capture missions of the kind that targeted Osama bin Laden in Pakistan, has been responsible for eliminating dozens of militant leaders while disrupting the ability of radical groups to operate freely and effectively.

Detractors, beside the legal argument, say the program has also killed thousands of civilians and remains unproven as a long-term strategy.

So who is right?  Is “decapitation” the right approach to confronting groups like Islamic State?

Among experts, there are two competing views: proponents like Daniel L. Byman, director of the Center for Peace and Security Studies at Georgetown University, argue that removing charismatic leaders is an effective way of disrupting the flow of their operations. “An often-neglected impact of killing terrorist leaders is on what they and their group do not do,” Byman has argued. “When a campaign against lieutenants is in full-gear, they must spend much of their time in hiding or moving from place to place. Communicating by phone becomes risky, and the circle of trust shrinks, making meetings or large-scale training harder to pull off. The hunt for spies within can become all-consuming. In the end, leaders are less able to lead, and the group’s cohesion and strategic direction suffer.”

Others, like Afghanistan expert Kate Clark, senior analyst for the Kabul-based Afghan Analysts Network, disagree. From her perspective, largely focused on the Afghan Taliban, targeted killings of the Taliban leadership has created space for more radical leaders to emerge while at the same time strengthening corrupt local power brokers who can take advantage of the power vacuum.

“As for the other aim of the strategy—persuading the Taliban that fighting is futile and they should negotiate,” Clark argues, “the United States may find it is killing some of the very people who will be needed to make peace.”

The differences between these groups is key: while the Afghan Taliban is an ethno-nationalist group with a clear political agenda, groups like Islamic State and al-Qaeda are amorphous ideological entities that operate more like cults. Targeted killings make more sense against them, proponents argue.

Similarly, the Pakistani Taliban (TTP), an umbrella organization representing a diverse group of radicals with differing agendas and ideologies—some Salafi-jihadist, some more regional—has proven sensitive to leadership changes. The assassination of Baitullah Mehsud in a U.S. drone strike in 2009 led to a crisis in which Hakimullah Mehsud emerged victorious but at the cost of internal cohesion. His killing in another drone attack in November 2013, led to even deeper fissures.

The TTP has now all but disintegrated. Some groups have pledged allegiance to Islamic State; another, the Punjabi Taliban, announced last September that it was abandoning its insurgency in Pakistan and refocusing its efforts on Afghanistan. Still others have gone solo to face off against the Pakistani military.

But what has proven an effective strategy against these groups has failed against the Afghan Taliban. In fact, how a group deals with the loss of its leadership is usually a good indication of the nature of the group itself and how best to deal with it. An organization like the Afghan Taliban appears more resilient to losses of senior leaders. It is a much more pragmatic and politically structured group, which makes the possibility of negotiating with it a serious option.

Men like Afri and Baghdadi are cult leaders and when they die, their cults usually die with them.