Why the Easter Rising changed everything for Ireland 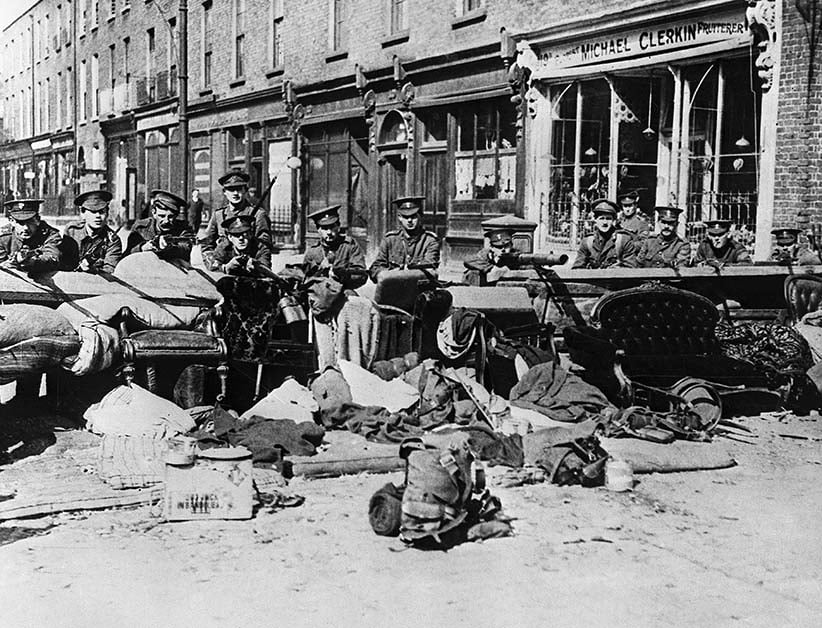 (Original Caption) 5/11/1916 – Dublin, Ireland: Easter Rebellion – Photo shows British troops armed with machine guns and rifles behind a moveable barricade composed of household furniture and which could easily be pushed foreward, in a street in the central section of Dublin. (Bettmann/Getty Images)

[The dead] Are changed, changed utterly:
A terrible beauty is born.
From Easter Rising 1916 by W.B. Yeats

When Keith Jeffery plotted out the structure for 1916: A Global History, the Irish historian’s look at what he considered the First World War’s hinge year through 12 monthly snapshots (see Maclean’s monthly updates here) April’s chapter was surely a moment foretold. The Easter rebellion is a foundational moment in modern Irish history and a powerful piece of evidence in Jeffery’s argument that, by the end of 1916, the Great War had cracked the foundations of all the Old World belligerents, winners as well as losers. Less than halfway through the war, there was already no road back from 1916.

A century ago on Easter Monday, April 24, armed republican rebels—if a preponderance of 1870-era Mauser rifles counts as “armed”—seized strong points in central Dublin. There were about 1,500 of them, including 200 women, and they held out for six days against increasingly overwhelming British troops, mobile artillery and shelling from a gunboat on the River Liffey. The destruction in the city core, in the heart of the British Empire, struck observers as reminiscent of wartime Belgium and shocked Irish and British opinion, but the loss of life was only a blip in a war that had already killed millions.

The dead amounted to 132 police and troops, 64 rebels and 254 civilians (mostly killed in crossfire); another 2,614 on all sides were wounded. In the same few days, an unremarkable week on the Western front, Jeffery points out, the 16th Irish Division, manning the trenches in Pas-de-Calais, suffered 570 dead and over 1,400 wounded. Yet Dublin, as surely as Verdun and Ypres, was a Great War battlefield, a smaller-scale clash that only makes sense in the context of the war, both politically and militarily. Cavalry proved useless in an urban setting, while defence trumped attack. Raw British recruits—the army did not want to weaken its frontlines in France by sending veterans—were as amateurish as the rebels, but the Irish mowed down the British as they attacked shoulder-to-shoulder in a manner that prefigured the slaughter of the Somme two months later. And, in the end, as on the Western Front, artillery proved dominant.

What is surprising about the rising—surprising for anyone who views modern Irish history through a lens of violent, continuous and barely suppressed drive for independence—is the change it marks from 1914, when the nationalistic Catholic Irish embraced the Imperial war effort. Ireland was on the brink of civil war that spring, between Ulster Protestant unionists seeking to remain an integral part of Great Britain and Catholics seeking greater autonomy. The threat of violence, however, came not from the nationalists, but from the unionists alarmed at the prospect of greater Irish independence and majority Catholic rule.

Both sides rallied to the colours when war broke out with Germany, the Catholics after the British Parliament passed a home-rule bill devolving power to an Irish Parliament, and promised to put it into effect after the war. But there was never a bond between the Irish population and the British government, a common dedication to seeing the war through even after it ground into a struggle of attrition, the sort of unspoken acceptance that marked the relationship between British and French leadership and their respective publics. As the war dragged on, with government and industry intensifying the war effort as part of the build-up for the Somme—politicians calling for conscription (never actually enforced in Ireland, unlike in Britain), and employers applying the stringent penalties of the Munitions Act against striking workers—the grudging acquiescence of the Irish began to crumble. As in all the pre-war empires, the centre could not hold, and things began to fall apart.

The war’s final contribution to the eventual break between what became two separate nations was the ferocity of the British response, of a piece with that of other belligerents dealing with restive minorities during an existential struggle. The Irish insurgents who surrendered considered themselves POWs, but the British saw them as traitors, and shot 15 of them after secret military trials. Roger Casement, a major nationalist leader who had travelled to Ireland in a German submarine in an attempt to stop the rising, was convicted of high treason and hanged.

It was the violence of the post-fighting response that changed everything “utterly,” not the least in Irish nationalism, formerly committed to an incremental and constitutional path to independence. Yeats’s great poem, which by naming the prominent Irish dead ties together crucifixion and resurrection—Christ’s rising at Easter and the nation rising in arms—was part of the process that made the insurrection such a potent force in Irish memory and Irish politics. It is still the day, and not the date, that resonates with the Irish. They celebrated the centenary of the April 24 insurrection on March 28, Easter Monday in 2016.