Why the war against ISIS is going to get worse

ISIS was driven from Mosul, but at a devastating price. The other Iraqi and Syrian cities it still controls will also not fall easily. 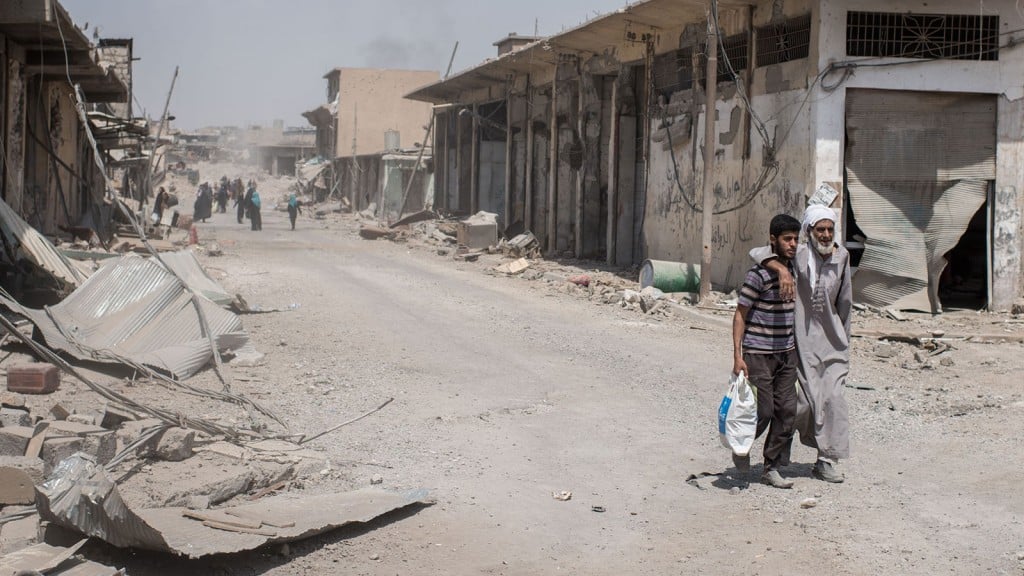 It may feel like the end of the so-called Islamic State is nigh but before anyone cracks the champagne bottles to toast the destruction of this collective bogeyman, there are some sobering facts to face.

To begin, the good news: As of July 9, the Iraqi government has officially announced Islamic State’s defeat in Mosul. The group’s last days, based on reports from locals, were anything but dramatic.

“They were launching grenades occasionally,” Mustafa Makeen, producer who has worked for this magazine, said over the phone on July 10. “Mostly they were just trying to escape. They were leaving their weapons and trying to mix in with fleeing civilians.”

So much for “God’s vanguard” in Mosul.

Now, the reality check: the Mosul offensive, which began in mid-October, has eaten up Iraq’s military resources. It was a tougher fight than anyone expected, lasting months longer than predicted and exacting a greater toll on the Iraqi security services than will ever be admitted. Now that Mosul has fallen, the Iraqis will need time to recoup, but any time they take will play into the hands of ISIS.

The reason is Mosul was not the only space the militants controlled. After Mosul, the Iraqis will now have to face them again in Tal Afar, a smaller town in the eastern desert near Syria but still a significant challenge. And then there is Hawija, a backwater to be sure but one encircled by canals which offer some formidable natural defences.

There is also the countryside around Hawija and the open desert along the Syrian border, dotted with villages on the banks of the Euphrates river leading to al Qa’im, a city as big as Hawija and Tal Afar combined, all under ISIS control. The Mosul offensive, where the world’s attention has been focused for the past few months, is only the beginning, the beginning of the end no doubt, but a beginning nonetheless.

Syria is even more complicated. Raqqa, the capital of ISIS’s self-declared caliphate, has been surrounded on all sides by the Kurdish-led Syrian Defence Forces (SDF), backed by U.S. ground troops and coalition airstrikes. The SDF have breached the walls of the old city and are making gains almost daily. But if Mosul offers a caveat, it is this: fighting ISIS in a concentrated urban environment plays to the group’s strengths. The battle, in that sense, has only just begun.

As they did in Mosul, ISIS fighters appear to be drawing the SDF and its American backers into the old city. Its narrow alleyways and dense urban geography limits the effectiveness of the heavy firepower the Kurds and Americans possess while trapped civilians complicate the kinetics of the advance. The Iraqis were given a taste of what that kind of war theatre feels like early on during their Mosul offensive. They moved in too quickly, found themselves surrounded, and suffered heavy losses.  If the SDF and their American advisers have learned their lessons, they will rely on heavy bombardment, which will mean massive civilian casualties.

Consequently, the battle for Raqqa’s old city is shaping up to be an even more gruelling slog than Mosul. Not only is it more than twice as big as Mosul’s tightly packed historic district but it was the first major city conquered by ISIS, eight months before it swept into Mosul in June 2014.  According to civilians I spoke to last November, ISIS fighters began preparing for an Iraqi army offensive on Mosul almost immediately after arriving. In Raqqa, they have had more time to prepare.

Nonetheless, Raqqa will almost certainly fall, eventually. The costs to the SDF will undoubtedly be high.  And by all accounts, it will likely be the last of the Kurds’ major battles against ISIS, as they will have reached the southern limits of Syria’s predominantly Kurdish region. Similarly, Iraq’s Kurds stopped their advance on ISIS once they had extended their control over areas they consider part of the historic Kurdistan.

That will leave the Syrian regime and its Russian backers to mop up the remaining ISIS strongholds, including Deir ez-Zor, where regime troops have taken control of more than half the city, and the string of Syrian villages along the Euphrates leading to Iraq. But the regime’s will to take on ISIS remains in question as it tries to consolidate territory it only recently wrested away from anti-regime rebels.

On the bright side, there are a couple factors that may lead to a rapid collapse of the Islamic State’s caliphate in the wake of Raqqa and Mosul: first if its leader Abu Bakr al Baghdadi is in fact dead, as rumoured, and the will to fight disintegrates, and second if the group has expended too many resources trying to defend its prized urban possessions.

The former does not seem likely considering the depth of the ideological commitment core ISIS fighters have to their cause. And if Baghdadi is dead, which the Russians claim he is, their leaders have been careful not make that fact public, in all likelihood to keep up morale.

The latter question is more difficult to answer. ISIS has built up a formidable arsenal pilfered from the retreating Iraqi army in Mosul and other areas it once controlled. Evidence has also emerged that it has become adept at producing its own weapons, particularly bombs and improvised explosive devices which its fighters have used to devastating effect. They have even managed to rig up commercial drones to drop grenades. Still, it is impossible to know how flush or how short they are on materiel.

As of writing, reports continue to come in of an ISIS diversionary offensive in a small town south of Qayyarah airfield, near Mosul, where the U.S. has a set up an airbase. The offensive was launched from Hawija.

On July 5, unconfirmed reports claimed ISIS had executed more than 200 ethnic Turkmens, including women and children, in Tal Afar.

Clearly, those towns will need to be the next targets after the fall of Mosul. Until that happens, ISIS will remain a presence in Iraq while in Syria, after conquering Raqqa, it will likely continue to control a rump-caliphate until the regime decides it is time to end it.

So the end of ISIS is coming, but it will be slower than we might hope, and more costly than anyone imagined.