Why this year's UN General Assembly is extraordinary

The players and the issues to watch at the U.N. General Assembly ministerial meeting 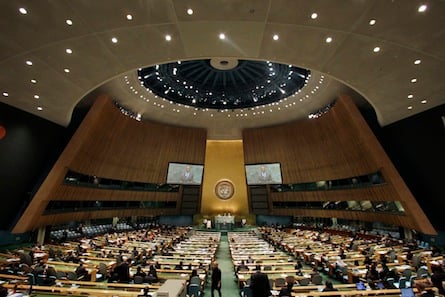 The annual U.N. General Assembly ministerial meeting is always a major event, but this year’s is extraordinary. It could bring a record number of world leaders, including Russian President Vladimir Putin, who hasn’t attended in years. Most of the attention will be on Putin and President Barack Obama who will have their own separate meeting in New York at a time of tensions over Russia’s military involvement in Syria.

Here’s a look at this year’s U.N. General Assembly:

WHAT IS THE GENERAL ASSEMBLY?

The General Assembly is the global body that represents all 193 U.N. member states. It meets throughout the year and is the forum where any global issue can be discussed, including those related to international peace and security. While it can make recommendations, its resolutions are not binding. It does have power over the U.N. budget, which it must approve, and it can and has adopted many global treaties. It holds an annual ministerial meeting in September called the General Debate that brings world leaders to U.N. headquarters. It begins Monday morning.

HOW IS THIS DIFFERENT FROM PAST GENERAL ASSEMBLY MEETINGS?

This is the 70th anniversary of the United Nations and it is bringing an unusually large number of presidents, prime ministers, kings and rulers to U.N. headquarters in New York. The high turnout is also a result of the three-day U.N. summit that ended Sunday, which was called by Secretary-General Ban Ki-moon to adopt new U.N. development goals for the next 15 years to eradicate poverty and preserve the planet. There are 17 goals and 169 targets.

DIDN’T MOST OF THESE LEADERS ALREADY ADDRESS THE UNITED NATIONS?

Many leaders came early to address the development summit. Some are addressing only the summit and some are addressing only the ministerial session. The summit speeches focused on new U.N. development goals and how to achieve them. The speeches at the annual gathering of presidents, prime ministers, and crowned leaders which starts Monday and ends Saturday are more wide-ranging, touching on global crises and conflicts as well as major social and economic issues.

WHAT ARE THE BIG ISSUES THIS YEAR?

World leaders are grappling with how to end the Syrian conflict that is now in its fifth year and has killed over 250,000 people, how to counter the spread of extremism in the Middle East and Africa and how to deal with the upsurge in migrants fleeing from Syria and other conflicts including in Iraq, Yemen and Afghanistan.

WHAT SHOULD WE LOOK FOR?

Hundreds of bilateral meetings are taking place from glitzy hotel suites to U.N.-created cubicles. The most highly anticipated and closely watched will be Monday night’s meeting between Obama and Putin, their first face-to-face encounter in nearly a year. Obama is chairing a major meeting Tuesday to tackle growing extremism. Russian Foreign Minister Sergey Lavrov, whose country holds the presidency of the U.N. Security Council this month, is chairing a ministerial meeting of the council Wednesday on counter-terrorism.