Why Wang Yi felt free to throw a hissy fit 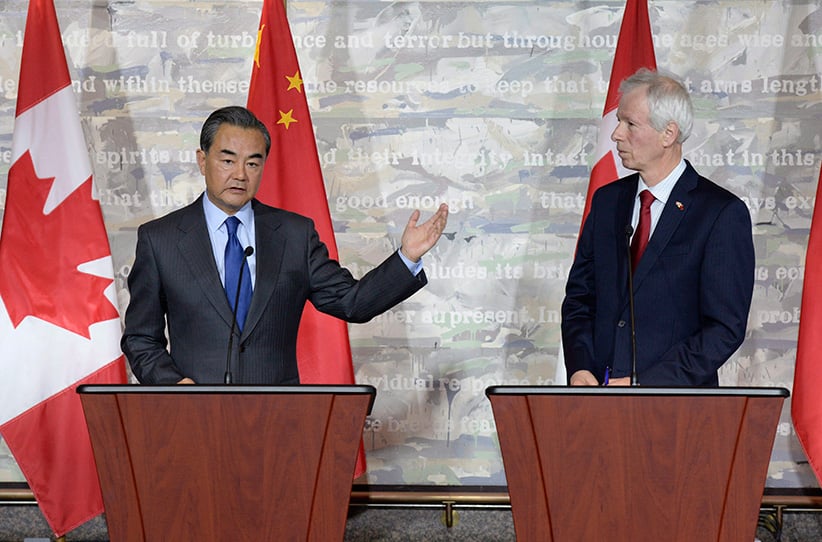 Judging by the tenor of the commentary on the opinion pages and the expert banter on all the usual television and radio public affairs programs, respectable opinion in Canada has decisively coalesced around the proposition that a very dim view indeed should be taken of Wang Yi, the emissary of the Central Committee of the Chinese Communist Party, who made a spectacle of himself by throwing a tantrum during a press conference in Ottawa last week.

But there is another way of looking at Wang’s petulant outburst—“You have no right to speak on this!”—in response to a question that was put not even to him, but to Foreign Affairs Minister Stéphane Dion, that touched delicately on the subject of human rights in China. From a more public-spirited perspective, Wang’s disgraceful harangue of iPolitics reporter Amanda Connolly has helpfully brought into focus a pattern of grovelling and mendacity in Canada-China relations that is rarely so closely observable.

Keeping Wang’s visit a secret until the last minute. Cravenly submitting to Wang’s boorish demands for an immediate audience with the Prime Minister. Disguising Canada’s humiliating obsequiousness in the most absurdly dainty diplomatic euphemisms. Resorting to such preposterous occlusions as to permit a single public encounter and a single query to Wang that required several questions from a variety of news organizations to be combined into a single question, with one follow-up allowed.

All this, and with a single public baring of Beijing’s sharp and bloody teeth, Dion is reduced to just standing there gawping through the whole thing, and the elaborate pantomime comes undone. So perhaps we should all be thanking Wang. Not even Dion’s subsequently frantic exertions in damage control can subtract from the public exhibition Wang made of Beijing’s belligerent, bullying vulgarity on “the world stage,” and of our own government’s kowtowing to it.

Before Wang’s interjection, Dion responded to Connolly’s question by mumbling something typically anodyne about Canada hoping that everyone can “agree to disagree,” as though all sides are equal, when they’re not. In the aftermath, Dion asserted that questioning politicians in Canada is a journalist’s “prerogative,” except it isn’t, it’s a constitutional right, and a solemn public duty besides.

Dion further claimed he’d just stood there with a dumb look on his face while Connolly was berated because she’s thick-skinned and needed no one to come to her defence, except no, this was not about chivalry. This is about quite a few things that Justin Trudeau’s new government would rather not become the subject of too much loose talk.

The Canada-China free-trade deal that was ostensibly at the top of Wang’s agenda in Ottawa is also the holy grail of a legion of former Liberal cabinet ministers and Chrétien-era mandarins who have insinuated themselves into lucrative Canada-China trade consultancies. Free trade with China was absent from Prime Minister Trudeau’s campaign pledges last year, but it suddenly became a top priority as soon as Trudeau got the job in October.

Related reading: How China is going to help save the world

The G7 countries, perhaps especially Japan, would rather Trudeau focus on China’s outlandish usurpation of the South China Sea, for starters. Then there’s the “irritant” involving Kevin Garratt, the Canadian missionary who was taken hostage by Chinese authorities in 2014 in retaliation for the former Conservative government revealing that a “highly sophisticated Chinese state-sponsored actor” had hacked into the computer systems of Canada’s National Research Council.

Canada says Garratt should be released before free-trade talks begin. Trudeau claims he’s wary about Chinese espionage, but also says there’s nothing wrong with Chinese state-owned enterprises buying up as much of Canada’s resource sector as it likes. Chinese President Xi Jinping says that if Canada wants free access to Chinese markets, Trudeau should first ram a pipeline to the B.C. coast on China’s behalf. “These discussions are central to a healthy relationship,” Dion said after Wang’s tirade.

Except they’re not. Canada cannot have a healthy relationship with a tyrannical regime that has lately reverted to the same brutish police-state habits that led up to the Tiananmen massacre. Under Xi, China has again become the world’s top jailer of journalists. China’s rank on the Reporters Without Borders index of press freedom is 176th out of 180 countries. China comes in dead last on the Freedom House “Freedom on the Net” list.

Trudeau and Dion insisted that they talked about Canadian sensitivities about human rights during private conversations with Wang, and will continue to say things like this in further private conversations. But to the unelected autocrats who run China’s government, hearing Canadian politicians preface their entreaties with perfunctory and ritualized mentions of the term “human rights” is like having to sit through some boring folk dance before the business part of the meeting’s agenda begins. They don’t care, as long as they get what they want.

Xi has made plain that he will no longer tolerate hearing the words “human rights” spoken out loud in the same sentence with the word “China.” That’s why Wang felt free to throw a hissy fit in Ottawa last week. It’s also why Canadians cannot allow themselves to be told to shut up about human rights in China.