Why we're failing to hold Bashar al-Assad to account

Michael Petrou on tears at the UN, and the failure of the 2013 agreement aimed at eradicating Syria's chemical weapons 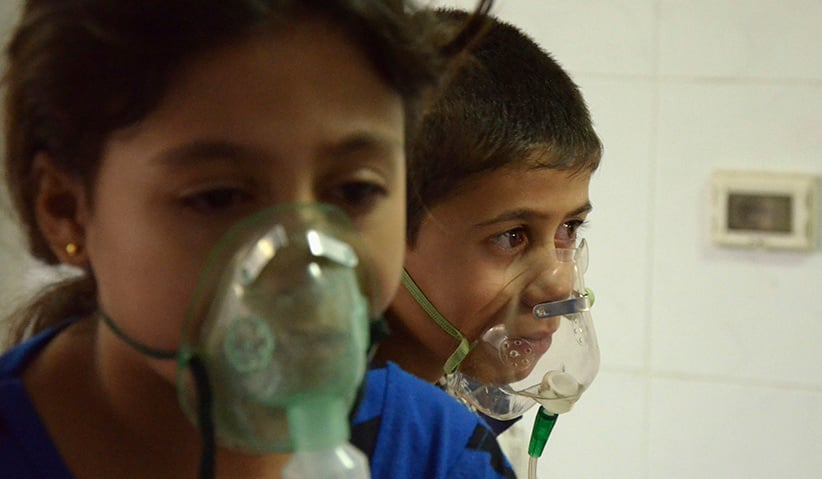 One hopes they were tears of shame.

Samantha Power, America’s ambassador to the UN, pledged those responsible will be held to account.

Nobody believes her. Nobody should, anyway.

It was not even two years ago that evidence of poison gas attacks by Syrian dictator Bashar al-Assad’s forces inconveniently became too persuasive for America to ignore.

In August 2012, U.S. President Barack Obama had declared that the use or transfer of a “whole bunch” of chemical weapons would be a “red line” for the United States. This didn’t stop Assad from gassing Syrians to death on several occasions after that statement was made, but he did so in sufficiently small numbers that Obama must have felt safe hiding behind his “whole bunch” threshold and did nothing.

Then, in August 2013, regime forces slaughtered some 1,400 Syrians in a sarin gas attack, including more than 400 children, according to White House figures. That, finally but temporarily, pushed Obama toward action.

America and some of its allies prepared to bomb Syrian regime targets in response. Britain backed out after Prime Minister David Cameron lost a vote in the House of Commons endorsing military action. Today, British Labour Party leader Ed Miliband, campaigning for an upcoming election, bizarrely cites his 2013 opposition to military action as proof that he’s tough enough to be prime minister.

Strikes might have gone ahead without Britain, led by America and France. But Russia stepped in with a plan that would see the destruction of Syria’s chemical weapons arsenal and spare Assad’s regime from air strikes. Washington hailed the deal. “Ensuring that a dictator’s wanton use of chemical weapons never again comes to pass, we believe is worth pursuing and achieving,” Secretary of State John Kerry said at the time.

Even if the deal did that, it was still an obscenity because it implicitly permitted non-chemical attacks, which Assad continued to carry out with renewed enthusiasm. His air force rolled barrel bombs out of helicopters and onto civilian neighbourhoods in broad daylight—because really, what was anyone going to do about it?

The group managing the destruction of Assad’s arsenal, the Organization for the Prohibition of Chemical Weapons (OPCW), was consequently awarded the Nobel Peace Price. They can’t really be blamed for this. They are committed to the laudable goal of eliminating chemical weapons, and in this case did their job well. But the award went some way toward legitimizing the sordid deal. On the other hand, it also meant that giving Obama the Peace Prize in 2009 was no longer the stupidest choice the Nobel Institute had recently made.

But now, even by the limited and morally perverted standards originally applied to it, the 2013 agreement stands exposed as a shallow fraud. It’s true that chlorine is not specifically banned as a chemical weapon, but the OPCW defines chemical weapons as: “any toxic chemical or its precursor that can cause death, injury, temporary incapacitation or sensory irritation through its chemical action.” Chlorine meets that criterion.

Assad is still gassing children to death. We’re still letting him get away with it. Those wondering why the West has so few friends among Syrian rebels might want to start there.