Why would Saudi Arabia execute a Shia cleric? It's all about America. 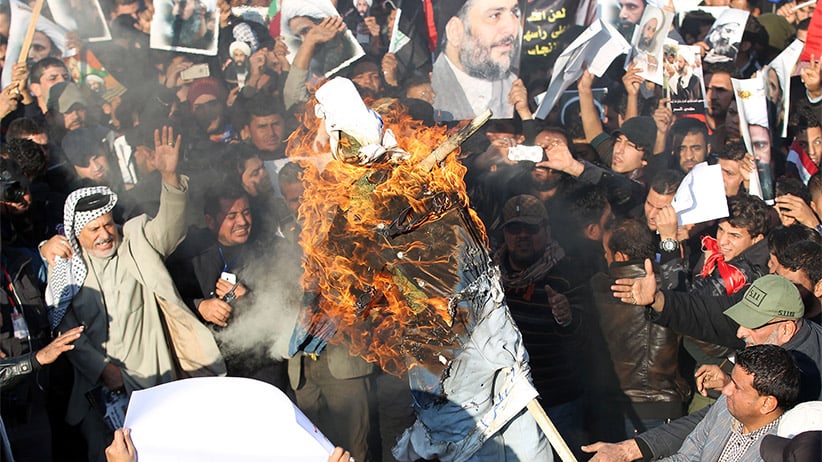 Supporters of Iraqi Shiite cleric Moqtada al-Sadr burn a effigy of a member of the Saudi ruling family as others hold posters of prominent Shiite cleric Nimr al-Nimr during a demonstration in the capital Baghdad on January 4, 2016, against Nimr’s execution by Saudi authorities. (Ahmad Al-Rubaye/AFP/Getty Images)

Why did Saudi Arabia execute Shia cleric Nimr al-Nimr—an action that has triggered an escalation in tensions between Saudi Arabia and its regional power rival, Iran, that has not been matched in decades?

One answer is: Why wouldn’t Saudi Arabia kill Nimr? The kingdom routinely beheads and shoots those it deems criminals or terrorists, with little regard for due process, and with an eclectic interpretation of the sorts of activities deserving of death. In 2011, a woman was beheaded for “sorcery,” and others have been executed for the same supposed crime. Nimr was only one of 47 killed on Saturday.

Considered a leader by some among Saudi Arabia’s Shia Muslim minority, especially those who took to the streets to protest the ruling House of Saud during the early days of the 2012 Arab Spring, Nimr was reportedly convicted of sedition, disobedience and bearing arms. He was a strong critic of the Saudi state but could not be personally linked to acts of violence.

Nimr’s execution was also part of a much larger conflict between Saudi Arabia and Iran. The two countries see themselves as standard-bearers for, respectively, the Sunni and Shia strains of Islam, though their confrontation is as much about regional power politics as religion. And Saudi Arabia has been increasingly eager to flex its political muscle in the region.

“Both Iran and Saudi Arabia are what we could call identity entrepreneurs,” says Matteo Legrenzi, a professor at Ca’ Foscari University of Venice. “They do utilize sectarianism to shore up domestic and international support for their policies, but they are willing to cross sectarian lines. Political expediency always comes first.” Iran, for example, has backed Hamas, a Palestinian Sunni militant group that targets Israel. Saudi Arabia espouses an intolerant brand of Islam, but will tacitly co-operate with Israel, a Jewish-majority state, against their common foe, Iran.

Divisions between Sunni and Shia Muslims have existed almost since the dawn of Islam and arise from a dispute concerning who should lead the early Muslim community following the death of the Prophet Muhammad in 632 CE. The struggle for regional clout between Saudi Arabia and Iran began heating up following the overthrow of Saddam Hussein’s regime in Iraq, which replaced a Sunni Arab minority dictatorship with rule by the country’s Shia majority, and a concomitant increase in Iranian influence there. The Shia, a minority within Islam, seemed ascendant. Sunni leaders began to fret about a rise in Shia power throughout the region. King Abdullah II of Jordan spoke about a “Shia crescent” arcing from Bahrain through Iran, Iraq and Syria to Lebanon.

From Saudi Arabia’s perspective, things have only gotten worse of late. Legrenzi points to three major developments that have made the country feel vulnerable, and therefore belligerent.

The first was what Riyadh perceived to be American President Barack Obama’s abandonment of Egyptian dictator Hosni Mubarak during the Arab Spring protests in Egypt. Here was a longtime American ally whom Washington would not protect. What did that mean for the House of Saud’s security?

The second was America’s rapprochement with Iran, particularly the negotiations toward signing a nuclear deal. “The Saudi government thinks the United States is grossly underestimating the potential for upheaval that Iran represents in the region,” says Legrenzi. The Saudis “feel they are the ones who need to lead the resistance to this Iranian influence in the Middle East.”

Taken together, Saudi Arabia concluded America is no longer a country on which it can rely to protect its interests against Iran.

“They have more or less given up on the Obama administration,” says Kristian Ulrichsen, a fellow for the Middle East at Rice University’s Baker Institute for Public Policy. “They feel there’s a sense of drift in [American] policy since the beginning of the Arab Spring, and it’s therefore incumbent on them and their allies, the other Gulf states, to take on the burden of trying to reorder a whole region that’s in chaos.” 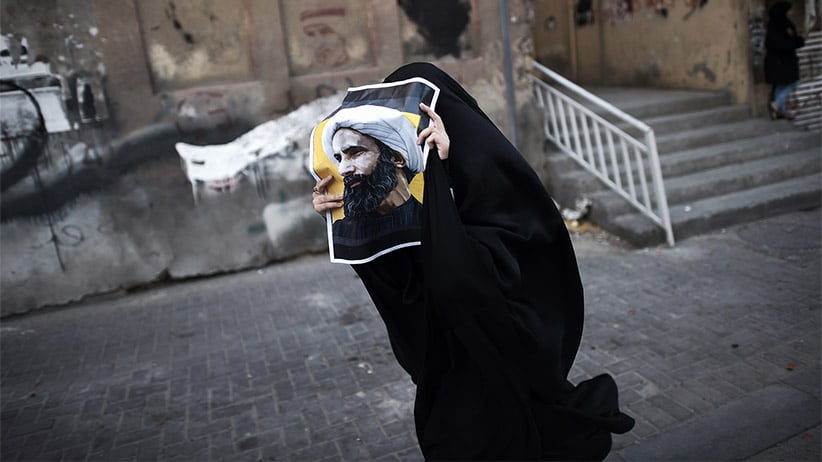 A Bahraini woman holds a poster bearing a portrait of prominent Shiite Muslim cleric Nimr al-Nimr during a protest against his execution by Saudi authorities, in the village of Jidhafs, west of the capital Manama on January 3, 2016. Iraq’s top Shiite leaders condemned Saudi Arabia’s execution of Nimr, warning ahead of protests that the killing was an injustice that could have serious consequences. (Mohammed Al-Shaikh/AFP/Getty Images)

Nimr spent years in Iran, but there’s no evidence he was an Iranian agent or pawn. He was nevertheless a symbol of Shia defiance, and therefore of Iran. His execution, says Ulrichsen, was meant as a message to Tehran that, fairly or not, Saudi Arabia associates its rival with domestic dissidents and will take harsh measures against them.

A source Reuters describes as someone “familiar with the Saudi government’s thinking” told the news agency: “Enough is enough. Again and again Tehran has thumbed their nose at the West. They continue to sponsor terrorism and launch ballistic missiles, and no one is doing anything about it. Every time the Iranians do something, the U.S. backs off.”

It’s reasonable to presume that the source “familiar with the Saudi government’s thinking” is conveying a message from the Saudi government. It signals extraordinary anger with the United States, and also a willingness on the part of Saudi Arabia to pursue a more assertive foreign policy, especially concerning Iran. “The Saudis are signalling that the gloves are off, and they’re in no mood to compromise on what they see as red lines,” says Ulrichsen.

The repercussions of this escalation are unlikely to involve direct confrontation between Saudi Arabia and Iran, says Ulrichsen, adding: “Although in this super-charged atmosphere, anything can trigger something very quickly.” Already there are several proxy conflicts that will probably intensify. In Yemen, a civil war pits an Iran-backed rebel movement against the Yemeni government supported by a military coalition of several Sunni states led by Saudi Arabia. On Saturday, the same day that Saudi Arabia executed Nimr, the Saudi-led coalition announced the end of a repeatedly violated ceasefire that had begun in December to coincide with United Nations-sponsored peace talks in Geneva.

“This is going to make more distant the possibility of an accord on Yemen,” says Legrenzi. The war there, he says, will likely now continue longer than it might otherwise have done.

In Syria, Saudi Arabia and its allies back rebels fighting against Assad’s regime, which Iran supports with advisers from its Revolutionary Guard, and with its proxy Lebanese militia, Hezbollah. United Nations peace talks on Syria in which Iran and Saudi Arabia are expected to play prominent roles are planned for later this month. Their chances of success were low to begin with: Assad isn’t prepared to cede power, and most Syrian rebels aren’t prepared to let him stay. But international negotiations may be even more hopeless now that Saudi Arabia and Iran have reached a new level of bellicosity. “It was always an uphill struggle,” says Ulrichsen, speaking of the peace talks. “Now I think it’s almost impossible.”

America is in no position to try to dampen the regional conflagrations fuelled by Saudi Arabia and Iran’s growing rivalry. “There is this idea that the United States has not been able to bend the Middle East to its own desires for the last 20 years,” notes Legrenzi, and this has made Washington wary of entangling itself in conflicts there. President Obama in particular is reluctant to deepen American involvement in the region. He sees America’s long-term security concerns emanating from the Asia-Pacific rather than the Middle East.

Iran, of course, is happy to see American influence wane. Saudi Arabia would like Washington to be more engaged but doesn’t trust it to do so anymore. Both countries are trying to fill the perceived vacuum.