How one Donald Trump tweet could end the world

Scott Gilmore: Are humans that stupid that a social media post could send missiles flying? Well, we've gone to war over a bucket (twice), bird droppings and stray dogs. 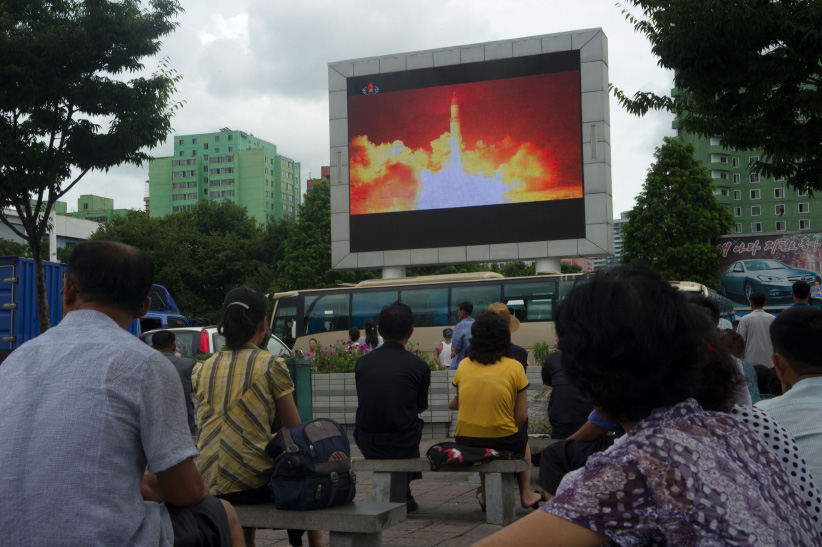 People watch as coverage of an ICBM missile test is displayed on a screen in a public square in Pyongyang on July 29, 2017. (Kim Won-Jin/AFP/Getty Images)

Could something as ridiculous and trivial as Twitter end the world? When I ask myself questions like this I wonder how I would explain the current state of affairs to my late grandfather. I can picture the look on his face when I get to the part about the new American president. And, I am not sure I would even be able to explain how politicians, despots, journalists, and even the military now use abbreviated sentences to constantly and instantaneously broadcast messages to the world. Regardless, here we are. The question remains. Will a bad tweet end the world?

Several pundits and analysts have already published detailed scenarios with titles like “How would a war with North Korea unfold?” A few of these propose the fuse would be lit on Twitter. For example, the president, agitated by a Fox & Friends segmented, could type out: “Little ROCKET MAN won’t be around much longer!! #MAGA”. Kim Jong Un could look at that message, and look at the Seventh Fleet in the Sea of Japan, and assume a pre-emptive strike was on its way. Rattled, and thinking he was out of options, Kim might then launch nuclear missiles against American bases in the region.

We can think of dozens of plausible scenarios like this. And, given that scientists believe even a limited nuclear exchange would do so much damage to the environment and the ozone layer, a “global nuclear famine” would be inevitable. So, yes, maybe a bad tweet could end the world.

But, let’s take a collective breath. After a million years of evolution, after migrating out of the Serengeti all the way to the moon, would mankind really end itself over one single social media post? Are we that stupid?

Allow me to digress for a moment. In 1077 England, three young princes liked to play practical jokes on each other as brothers do. One day, William and Henry pulled a big one, which ended with their brother Robert wearing a full bucket of sewage on his head. He was understandably furious and even angrier that their father refused to punish anyone. So, he and his followers decided to seize a castle. A three-year civil war ensued.

Incredibly, this isn’t even the only time men went to war over a bucket. In 14th century Italy, the soldiers from a rival city slipped into Bologna one night, and stole a bucket from the well in the central square. When they refused to return it, the burghers of Bologna had no choice—they declared war. There were two thousand casualties.

Two large Arabian tribes decided to pit their finest horses against each other in a race “one hundred bow shots long.” The Abs brought out a stallion called Dahis; the Dhubhiyans’ entry was named Ghabra who got off to a fast start and led throughout the race. Dahis was able to catch up in the final stretch, though, until he was waylaid by an opposing fan just before the finish line. There were words. That war lasted forty years.

Then there was the “War of Jenkin’s Ear”. A Spanish sailor cut the ear of a British captain they suspected of smuggling. Nine years of fighting left 4,500 and 20,000 Spanish and British dead, respectively.

There have been wars over flagpoles, stools, bird droppings, stray dogs and cod. In 19th century China a man read a missionary pamphlet and decided he was the reincarnation of Jesus and was on a mission from God to revolt against the government—1.5 million dead. Canada is not immune, either. We’ve had the War of the Pig—the pig in question wandered over the American border and was shot by a farmer. The British responded with five warships. And, of course, in 1914 a young revolutionary shot an old Archduke, sparking World War One (which arguably sparked World War Two).

Now, in each of these examples there were underlying causes. The Dhubhiyans could never stand the Abs. The Chinese emperor was extremely unpopular. A European arms race had gotten out of hand. This was the fuel. But it required a spark. A pig. A stool. A bucket.

Across the centuries, across the world, across cultures, we have rarely hesitated to go to war just because the casus belli was ridiculous or trivial. In this light, launching missiles over a bombastic tweet does not only look possible, it seems almost inevitable.