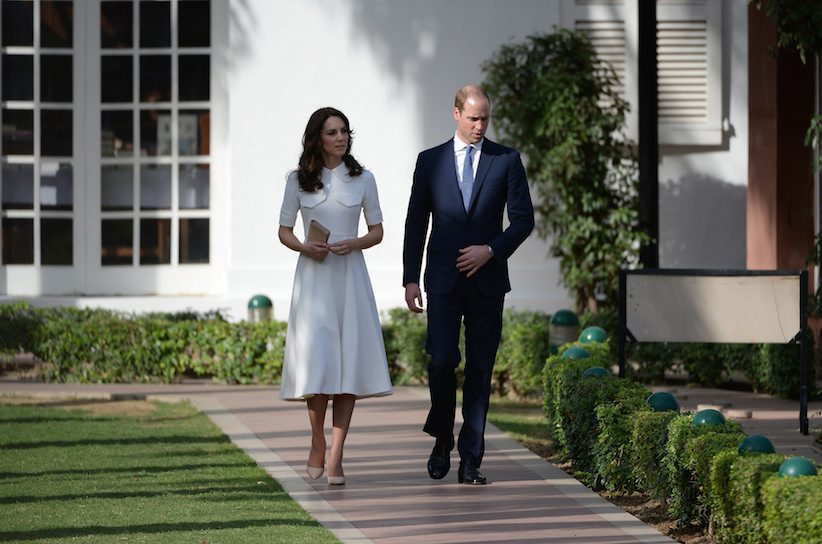 Prince William, along with his wife, Kate, during a visit to Gandhi Smiriti, an Indian museum dedicated to Mahatma Gandhi. (Prakash Singh, pool photo via AP)

NEW DELHI — The Duke and Duchess of Cambridge paid respect to Indian independence leader Mohandas K. Gandhi on Monday and met with young entrepreneurs in India’s financial capital of Mumbai to speak with the country’s next generation of business leaders.

On the second day of their weeklong royal tour of India, Prince William and his wife, the former Kate Middleton, spent nearly an hour with the entrepreneurs and the venture capitalists likely to fund some of their enterprise ideas.

Kate, dressed in a cream wool crepe outfit, smiled and waved at crowds of onlookers who had gathered outside the Mumbai cafe where the meeting was held.

Later Monday, the royal couple flew to New Delhi, where they laid a wreath at a memorial to honour Indian soldiers who had died in World War I.

Soon after that, they paid respect to Gandhi, bowing their heads as they stood in front of a memorial for the independence leader. They then toured a museum near the spot where Gandhi was assassinated in 1948.

In the evening, the couple was to attend a garden party to celebrate Queen Elizabeth’s 90th birthday, which is April 21. William was expected to speak to the large gathering of prominent Indians at the reception about his grandmother, Britain’s longest-reigning monarch.

William and Kate are travelling without their two children — 2 1/2-year-old Prince George and 11-month-old Princess Charlotte. They had taken George to Australia with them in 2014 on their last royal tour.

On Wednesday, the royal couple will sit down for lunch with Indian Prime Minister Narendra Modi, before travelling to the Kaziranga National Park, home to two-thirds of the world’s Indian one-horned rhinos, in the northeastern state of Assam.

William and Kate will then head back to India, where they’ll wind up their tour with a visit to the Taj Mahal, retracing the steps of a 1992 visit to the monument of love by William’s mother, the late Princess Diana