With the attacks on Brussels, Europe's crisis of competence boils over

It is time for Europe to finally abolish its network of terrorist safe havens, says Terry Glavin 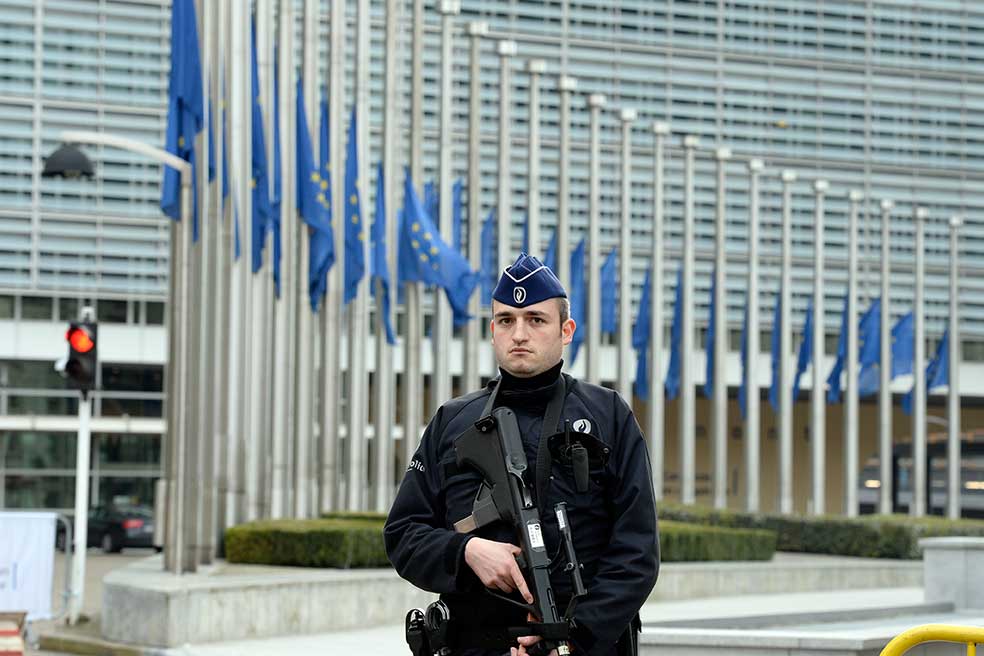 A Belgian Police officer stands guard in front of the European Union Commission headquarter in Brussels where the European flags are seen at half mast, after the terrorists attacks at Brussels airport and in the Brussels metro. (Thierry Charlier/Camera Press/Redux)

The jihadi mayhem that killed at least 35 people and injured more than 300 in Brussels on March 22 just might signal the moment that Europe at long last musters the resolve to get itself sorted and abolish the terrorist safe havens that have established themselves across the subcontinent, from Denmark to the Dardanelles. Putting it off any longer certainly won’t do.

“The world’s wealthiest failed state,” as it has come to be known, Belgium endured 589 days without a functioning elected government between June 2010 and December 2011, and remains a dysfunctional, linguistically divided waxworks of one federal and five regional-cultural parliaments. With two scandalously under-resourced intelligence agencies, an army of only two brigades and six battalions and a public security patchwork so fragmented that Brussels alone is patrolled by six separate police forces, Belgium is like Waziristan, except mainly Flemish and Walloon.

A notorious network of violent Islamist hoodlums, concentrated in the rough-and-tumble district of Molenbeek in Brussels, has been operating in plain sight since the 1990s, planning, plotting and carrying out dozens of elaborate jihadi missions from Afghanistan to Algeria. With Islamic State having painted a big bullseye on Europe last year, no one was exactly taken off guard by the suicide bombs of Black Tuesday, March 22.

Only three days earlier, Salah Abdeslam, suspected of masterminding the Islamic State terrorist attacks in Paris last November, was captured in Molenbeek, where he grew up. The Black Tuesday suicide bombers, themselves Belgians, were also connected to the cell that carried out the Paris attacks.

Europe itself is in the midst of its own demoralizing identity crisis. Bullied by a newly belligerent Russia, fatigued by the estrangement of several of its own member states and the spectre of a British referendum Yes vote on full withdrawal, the European Union has been struggling with its worst humanitarian crisis since the Second World War, with hundreds of thousands of refugees washing up on the Mediterranean coasts. Now this.

Since last year’s attacks in Paris, France is settling into a permanent state of martial law. The EU, with no spy agency of its own, cannot guard its perimeter or effectively police its internal borders, and has foolishly counted on the United States to lead the fight against ISIS. Europe is Belgium, writ large.

Nowadays it is the Arabs of Syria and Iraq who are suffering from a European problem, not the other way round. The Soufan Group, a security and intelligence think tank, counts at least 5,000 Europeans among perhaps 31,000 jihadis from 86 countries who have taken up arms for ISIS. That’s a fighting force greater in number than Islamic State’s own Syrian and Iraqi fighters, estimated by the U.S. director of national intelligence at fewer than 25,000 militants.

“Muslims” are not Europe’s terrorism problem, and neither are refugees—none of the recent outrages in Europe were committed by refugees. Disaffection, alienation and conspiracy theories are commonplace among European Muslims, but dangerous Islamist radicalism and the Islamic State’s “foreign fighter” recruitment successes tend to be specific to certain European towns, districts and ghettos. While only about 130 Canadians and 250 Americans are believed to have succumbed to the Islamic State’s sociopathology, Belgium has contributed 470 Islamic State fighters to the genocides under way in Syria and Iraq, all by itself.

There is very much a problem, however, within Islam. In the days following the atrocities of Brussels, while tens of thousands of Pakistani Islamists were marching on the capital of Islamabad to demand harsher enforcement of that country’s grotesque blasphemy laws, a suicide bomber from a Taliban offshoot targeted Christians on Easter Sunday at a playground in Lahore, murdering more than 70 people. The butchery unfolding in Nigeria, Burkina Faso, Bangladesh and elsewhere has got nothing to do with the “blowback” from Western imperialism that is ritually trotted out whenever some spectacularly obscene crime is committed in the name of Allah in one of the NATO countries.

Europe’s problems involve cultural confidence, institutional competence and an existential dilemma the European Union failed to anticipate: There can be no free ﬂow of people, capital, goods and ideas between liberal democracies and torture states, and Europe cannot simply look away or count on Washington when those states collapse, as Somalia did in the 1980s, and Afghanistan in the 1990s, and more recently, Iraq, Syria and Libya.

Nor can multiculturalism embrace its Islamist antithesis. It is a circle that cannot be squared, culturally, politically or constitutionally.