Witness: 'I will never stop hearing those cries for the rest of my life' 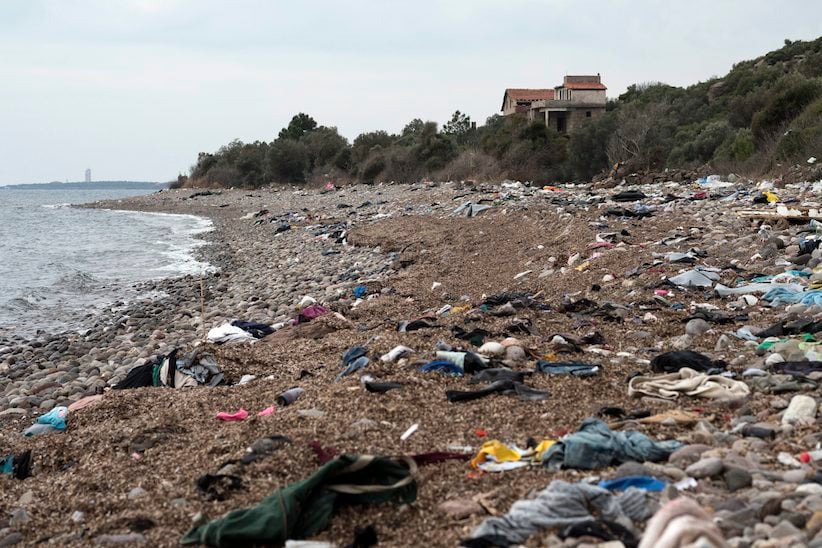 A photo from Friday, Jan. 29, 2016 of  a beach near Ayvacik, Turkey. A boat smuggling migrants to Greece slammed into rocks off the Turkish coast near Ayvacik on Saturday and capsized, killing at least 33 people including five children. (Halit Onur Sandal, AP Photo)

AYVACIK, Turkey — A witness to the drowning of 37 people including babies and other young children off Turkey’s coast recounted the disaster, describing the screams in the moments after the boat carrying the migrants slammed into rocks.

Gulcan Durdu, who lives on the beach in the Aegean resort of Ayvacik, cried Sunday while retelling the tragedy that happened at dawn the previous day.

She described being awakened by screaming and wailing after the boat struck rocks and capsized.

“I thought somebody was being murdered,” Durdu said.

Durdu told The Associated Press that she and her husband rushed to try to help survivors and brought a boy to their home to try to warm him up.

“We wrapped him up (in blankets),” she said. “I brought the hair dryer to ‘warm.’ The boy became limp in my arms” before losing consciousness.

The boy was still alive when she handed him over to paramedics who had arrived, Durdu said, adding that she would be haunted by the tragedy forever.

“I will never stop hearing those cries for the rest of my life,” Durdu said. “I will never forget. It was terrible. They died screaming. It was dark.

“We were only able to save those who were able to swim ashore.”

On Sunday, the overturned boat was still sitting on rocks offshore and visible from the construction site where Durdu lives. The beach was littered with grim reminders of the disaster, including lifejackets, a child’s sandal, clothing and other personal belongings that had washed onshore.

The migrants were trying to make the short journey from Turkey to Greece. Europe has endured a huge influx of migrants, most of whom undertake a dangerous journey in search of a better life.

Images of dead children on a beach on Saturday were another soul-searing reminder that Europe’s migrant crisis keeps destroying lives and families by the day.

They recalled the photo of 3-year-old Aylan Kurdi lying face down on a Turkish beach last year. His story put an intimate face on the Syrian refugee crisis for people across the world, prompting many to finally grapple with the magnitude of the suffering caused by the war in the Middle East and the treacherous journeys many risk seeking shelter in Europe.

European countries have been strained by the influx of migrants, leading to disagreements over what to do with the large number of new arrivals and how to share the burden.

In Germany, the vice chancellor called for a nationalist party to be put under observation by the government agency that tracks extremists after its leader suggested that police should be allowed to shoot refugees trying to enter the country.

Vice Chancellor Sigmar Gabriel told Bild newspaper that “there is massive doubt that (the Alternative for Germany party) stand by the free democratic order of the republic.”

Frauke Petry, the head of the party also known by its German initials AfD, told the Mannheimer Morgen daily on Saturday that a border police officer “must stop illegal border crossings, and also make use of his firearm if necessary.” Pushed by the newspaper for more, she continued that “no policeman wants to fire on a refugee and I don’t want that either. But the last resort includes the use of armed force.”

Germany saw nearly 1.1 million asylum-seekers enter the country last year and the AfD has been gaining in support as more people question whether the government will be able to deal with the influx.

“Whoever proposes such a radical approach apparently wants to overturn the rule of law and exploit the police,” he said in a statement.

Baden-Wuerttemberg governor Winfried Kretschmann, a member of the Greens party that is in opposition at the federal level, told Berlin’s Tagesspiegel newspaper the chancellor’s insistence on “working step by step” on a European solution to the refugee crisis was the correct path.

“Which of her counterparts in the EU will hold Europe together if she fails?” he asked. “Far and wide there’s nobody in sight. Therefore I pray every day that the chancellor remains healthy.”

David Rising in Berlin contributed to this report.