'Everything was coming down... It was chaos, it was unbelievable. It was the worst thing' 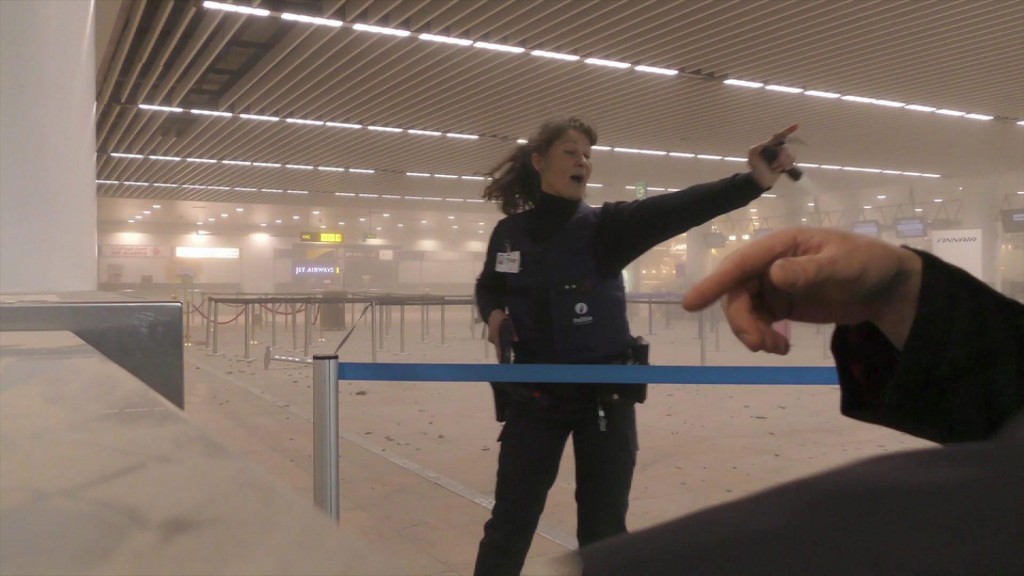 In this photo provided by Ralph Usbeck a police officers directs passengers in a smoke filled terminal at Brussels Airport, in Brussels after explosions Tuesday, March 22, 2016. (Ralph Usbeck via AP)

Entrepreneur Marc Noel, 63, was awaiting a flight from Brussels to Atlanta when he decided to buy some automobile magazines for the flight — an act he thinks may have saved his life.

He was in an airport shop when the first explosion struck about 50 yards (meters) away, bringing down a chunk of the ceiling.

“People were crying, shouting, children. It was a horrible experience,” said Noel, a Belgian who lives in Raleigh, North Carolina. “I don’t want to think about it, but I would probably have been in that place when the bomb went off.”

He said a second blast hit 10 to 15 seconds later.

“This feel likes war — fire engines, police everywhere,” said Noel, as he and hundreds of other passengers toting their hand luggage were evacuated to the town of Zavantem.

“I was as close as I could be to the other side,” he told the AP. “It hasn’t happened yet. I guess it’s not my hour.”

Georgian journalist Ketevan Kardava was lining up for a flight to Geneva just after 8 a.m. when, she said, something black and suitcase-shaped exploded in front of the Delta Air Lines counter nearby. She said the glass walls shattered and smoke filled the air.

“Everything was broken,” she said. “We were crying, shouting, running we didn’t know where.”

Minutes later, amid the chaos, a second explosion sounded, she said. By then, chaos had enveloped the terminal building and she could see very little.

Security forces herded thousands of people to the back of the airport, where she said they were waiting to learn when it would be safe enough to leave.

Anthony Deloos, who works for check-in and baggage services firm Swissport, said the first blast hit near a counter where passengers pay for overweight luggage.

“Twenty meters from us we heard a big explosion,” he said. “It’s like when you’re in a party and suddenly your hearing go out, from like a big noise.”

He said shredded paper was flying through the air, and he thought a billboard had fallen down, but a colleague told him to run.

“I jumped into a luggage chute to be safe,” he said.

Ralph Usbeck, 55, an electronics technician from Berlin, was checking in his baggage for an American Airlines flight to Florida when the first blast struck.

“I assumed it was training, but some litter was in the air, so I was not sure if it was a terrorist act,” he told the AP.

“Seconds later, a much more heavy, heavy detonation happened, some more distance (away) but much more heavy. This was the moment I realized this was a terrorist act.

“The first detonation, very few people got panic(ked). The others didn’t realize what happened, or they looked around. But the second explosion was much more heavy — panic, crying and everywhere this dirty dust, like from concrete.”

Outside, he saw several injured people, including “a man who had injuries on his leg and his hair was partly burned and partly some white dust in his hair.”

“It took a very, very long time till the ambulances came,” Usbeck said. “Maybe half an hour.”

Jef Versele, 40, from Ghent, Belgium, said he was at the airport and about to check in when he heard two blasts and suddenly the air was full of broken glass.

“Everything was coming down — glassware. It was chaos, it was unbelievable. It was the worst thing,” he said.

“People were running away. There were lots of people on the ground. A lot of people are injured.”

Jordy van Overmeir had just collected his luggage after landing at the airport from Bangkok when “all of a sudden I heard a loud explosion — this boom. Initially I thought it was the sound of a suitcase falling down.”

“At this point I saw all these policemen running around, shouting and saying ‘there was an explosion,” he told Sky News.

Outside the baggage claim area and the arrival hall he could “smell smoke and see glass and I saw blood.”

“Then I came outside of the airport on the parking lot and there I saw people with head wounds, people crying, more blood on the road and glass everywhere.

“There was a lot of panic, with people running around. Policemen, military everywhere. There were ambulances going around. People seemed really shocked … Everyone seems very shocked and very sad.”

Shortly after the airport explosions, another blast hit a subway train at Maelbeek station in central Brussels.

Alexandre Brans, 32, said the train was pulling out of the station “when there was a really loud explosion.”

Outside the station, Brans wiped blood from his face as other people milled around with their clothes badly burned; the stuffing of one person’s jacket hung in shreds. First responders ran through the street outside with two people on stretchers.

“It was panic everywhere,” Brans said. “There were a lot of people in the metro.”

Journalist Evan Lamos was on a subway train between Maelbeek and Art-Loi stations when “we felt a small blast of air and we heard some thudding in the distance.”

“The metro immediately stopped, the lights turned off, the engine turned off, a message came over the intercom saying that there (had) been a disturbance on the line,” he said.

“People were obviously nervous, I think a lot of people like myself have been reading about the explosion at Brussels airport as they were on their way to work.”

Lamos, who filmed passengers stumbling along the darkened tracks as they were evacuated from the train, said that “after a few minutes someone came from the front of the metro to the back of the metro, opened up the metro doors, installed a ladder and had us evacuated on to the tracks and walk back to the Art-Loi metro station.”

Armen Cholakian, a consultant for the European Commission, was running late as he walked toward the Maelbeek subway station.

“As I approached the station, suddenly the whole front entrance disintegrated,” he told ITV News. “There was glass, shrapnel, flying metal.

“It was a surreal moment, because there wasn’t a sound of the explosion, but you certainly saw what happened. And it was pretty devastating — you could clearly see a shockwave destroy the whole front side of the station, even though the explosion occurred somewhere far away, deep inside the station.” 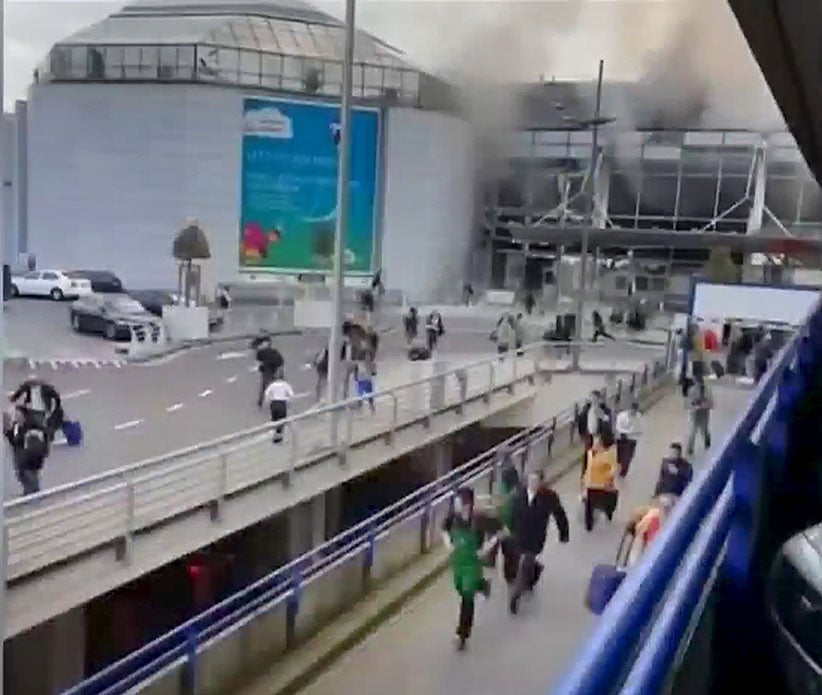 Associated Press writers John-Thor Dahlburg and Lorne Cook in Brussels, Lori Hinnant in Paris and Jill Lawless in London, contributed to this report.