Six red cards were doled out in the group stage. Were they deserved? 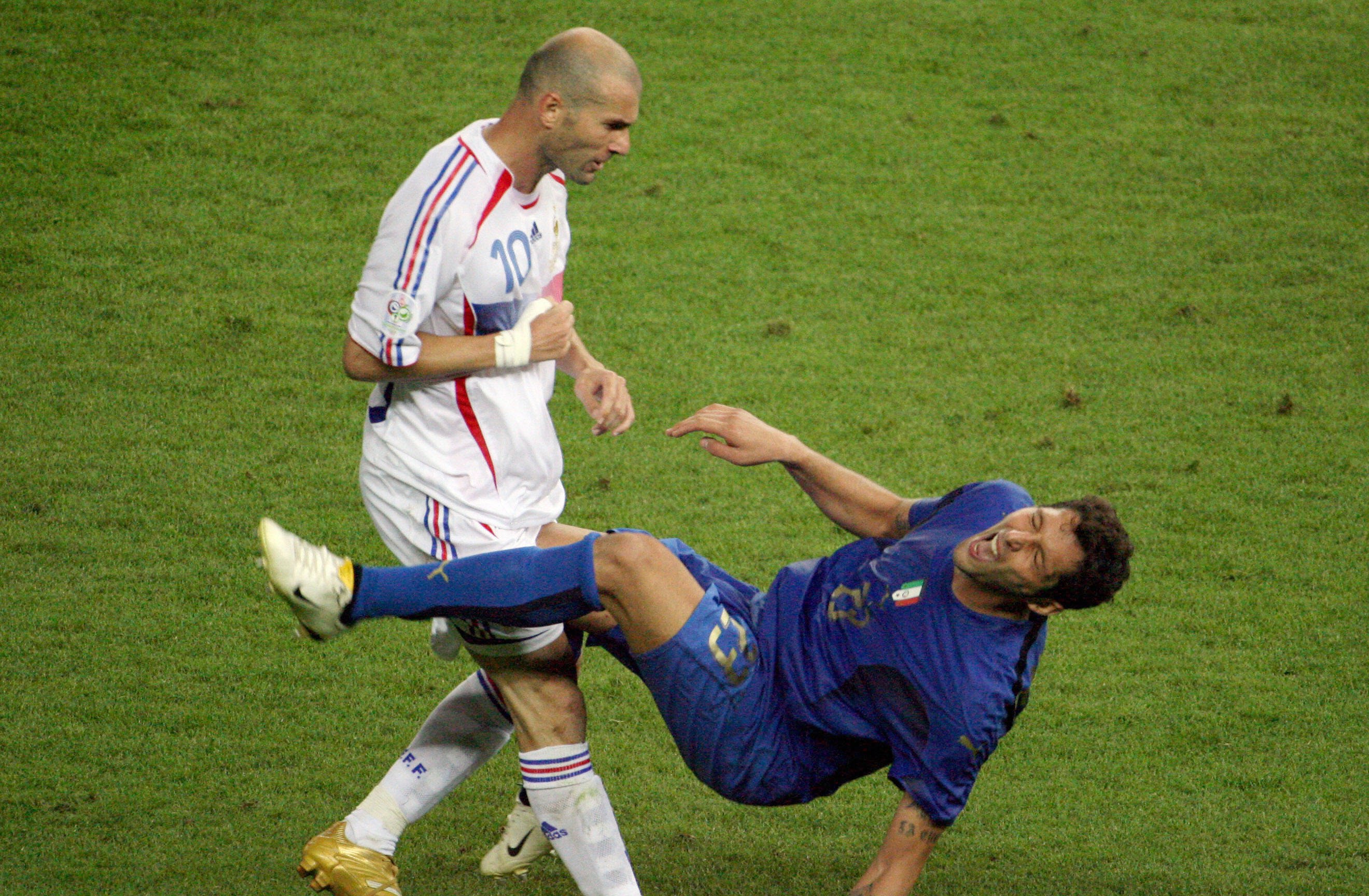 The most enduring image of the 2006 World Cup might be the disgraceful end to the glorious career of French star Zinedine Zidane. After head-butting Italian Marco Materazzi during extra time of the final (allegedly, Materazzi insulted Zidane, whose parents are Algerian, by calling him a terrorist), Zidane was shown the red card and expelled from the game, which France ultimately lost on penalty kicks.

While the 2010 tournament will (hopefully) not be defined by a similarly ignominious moment, the opening round has produced a total of six straight red cards. Do any of them stack up to Zidane’s in terms of sheer needlessness? Were they deserved? And how did the teammates of those sent-off players react to their expulsions? 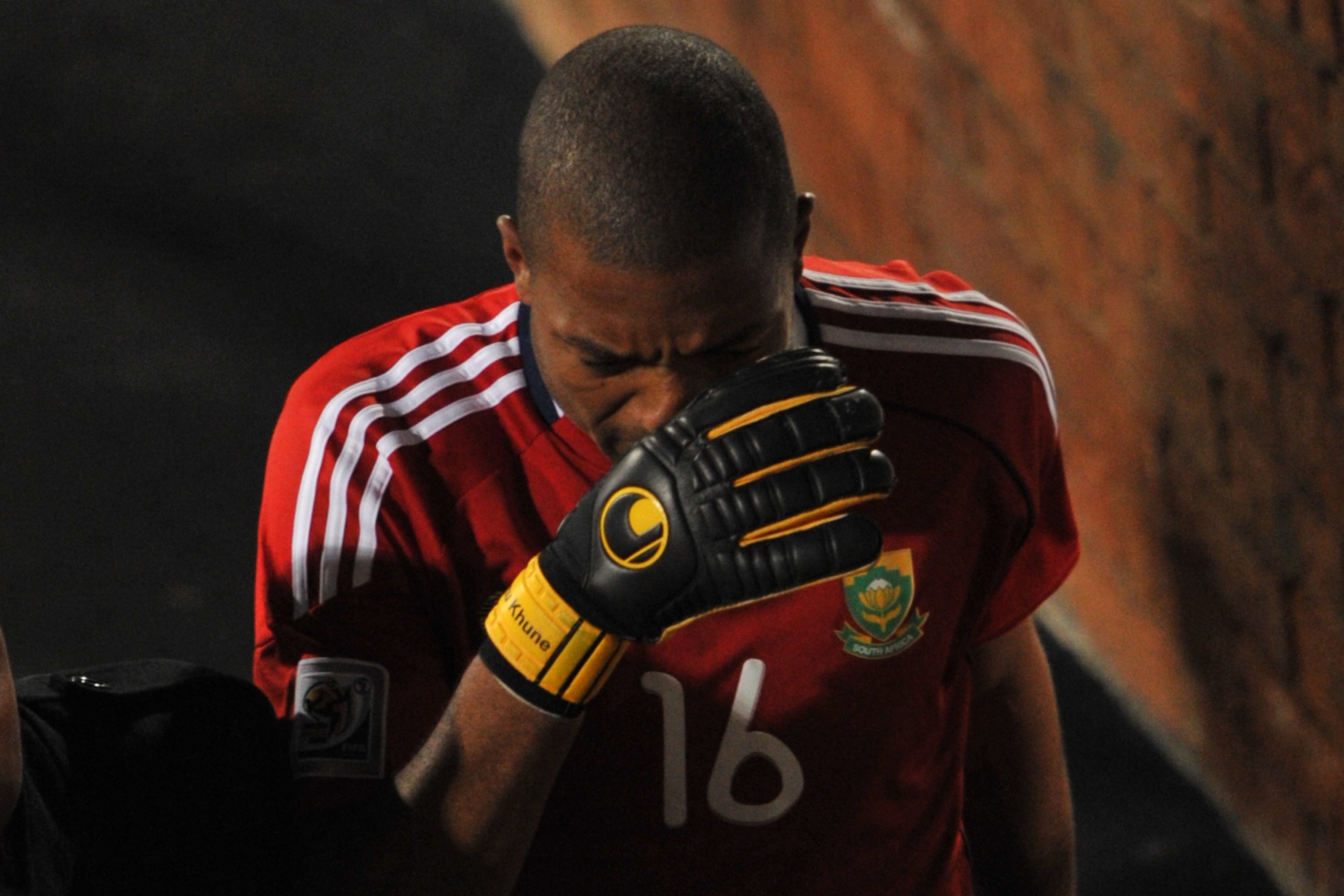 What did he do? As Uruguay’s Luis Suarez swept in front of the goal with the ball at his feet, Khune dove in and clipped Suarez’s foot with the tips of his toe. The contact, though minimal, sent Suarez hurling to the grass as if he’d just been harpooned… and sent referee Massimo Bussaca reaching into his pocket.

Was the red card deserved? By the absolute letter of the law, yes. The FIFA Laws of the Game stipulate that a red card is to be shown to a player who “(denies) an obvious goalscoring opportunity to an opponent moving towards the player’s goal by an offence punishable by a free kick or a penalty kick.” Sure, the contact between Khune and Suarez was slight, but the red card was still technically justifiable.

How did the team react? Backup goalkeeper Moeneeb Josephs was forced to enter the game and immediately face a penalty kick, which Diego Forlan converted to put Uruguay up 2-0. A tired South African side then conceded a third goal in injury time, which all but eliminated them from contention for the Round of 16. 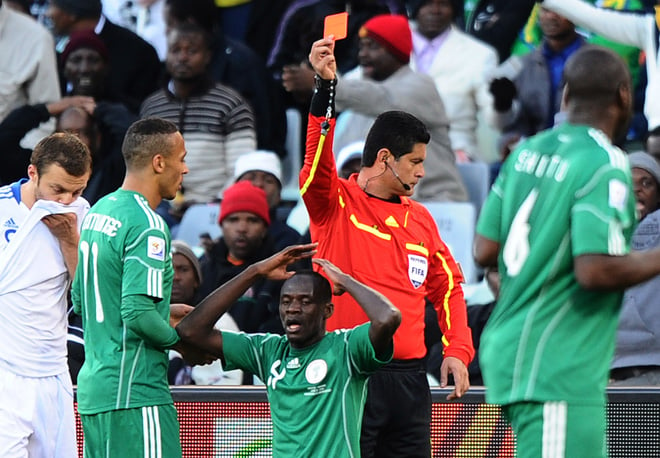 What did he do? While jostling for the ball near the sideline with Greece’s Vasilas Torosidis, Kaita (for reasons known only to him) kicked out at Torosidis, catching him on the thigh with his cleats.

Was the red card deserved? If “stupidity” were a reason for being sent off, Kaita would probably have met that guideline with this act. As it was, Kaita’s momentary lapse in judgment also qualified as violent conduct, for which the referee correctly showed him the red card. Even Kaita later admitted that the ref was right to boot him from the game.

How did the team react? Not well. Being forced to play more than half of the match shorthanded, the Nigerians allowed the Greeks to score their first- and second-ever World Cup goals, en route to the their first-ever World Cup victory, and a nearly-assured early exit from the tournament for the African side. 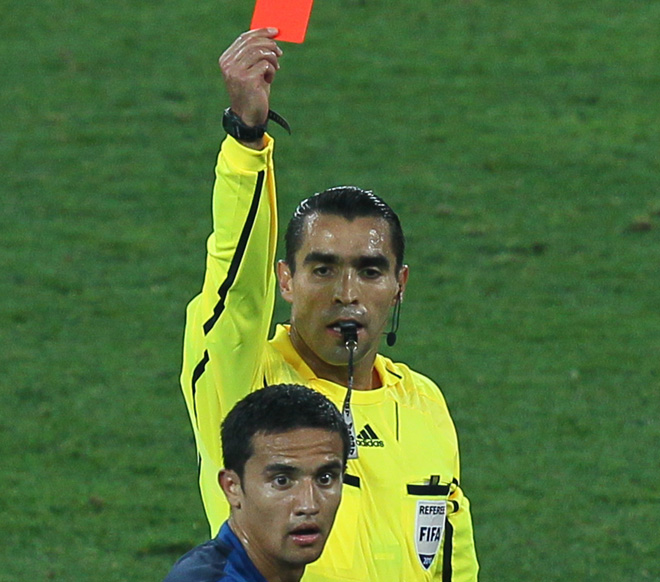 What did he do? In the 57th minute, Cahill clumsily slid into the legs of German midfielder Bastian Schweinsteiger. Replays seemed to show Cahill was slightly off-balance while making the tackle, and appeared to be pulling out in an attempt not to smash into Schweinsteiger. Even so, referee Marco Rodriguez deemed the incident to be serious foul play and sent Cahill off.

Was the red card deserved? It depends on how much weight you give to precedent. Players have been sent off for less harmful tackles, and any time someone slides in with both legs from the side of an opponent, it will certainly garner attention from the referee. But Cahill called the red card “the saddest moment” of his career, and even Schweinsteiger offered condolences to the Aussie afterwards.

How did the team react? Down 2-1 to the Germans at the time, the Socceroos looked as though they could potentially find an equalizing goal. But the red card destroyed any momentum they may have amassed, and opened the door for Germany to score twice more, on their way to a convincing 4-1 victory. 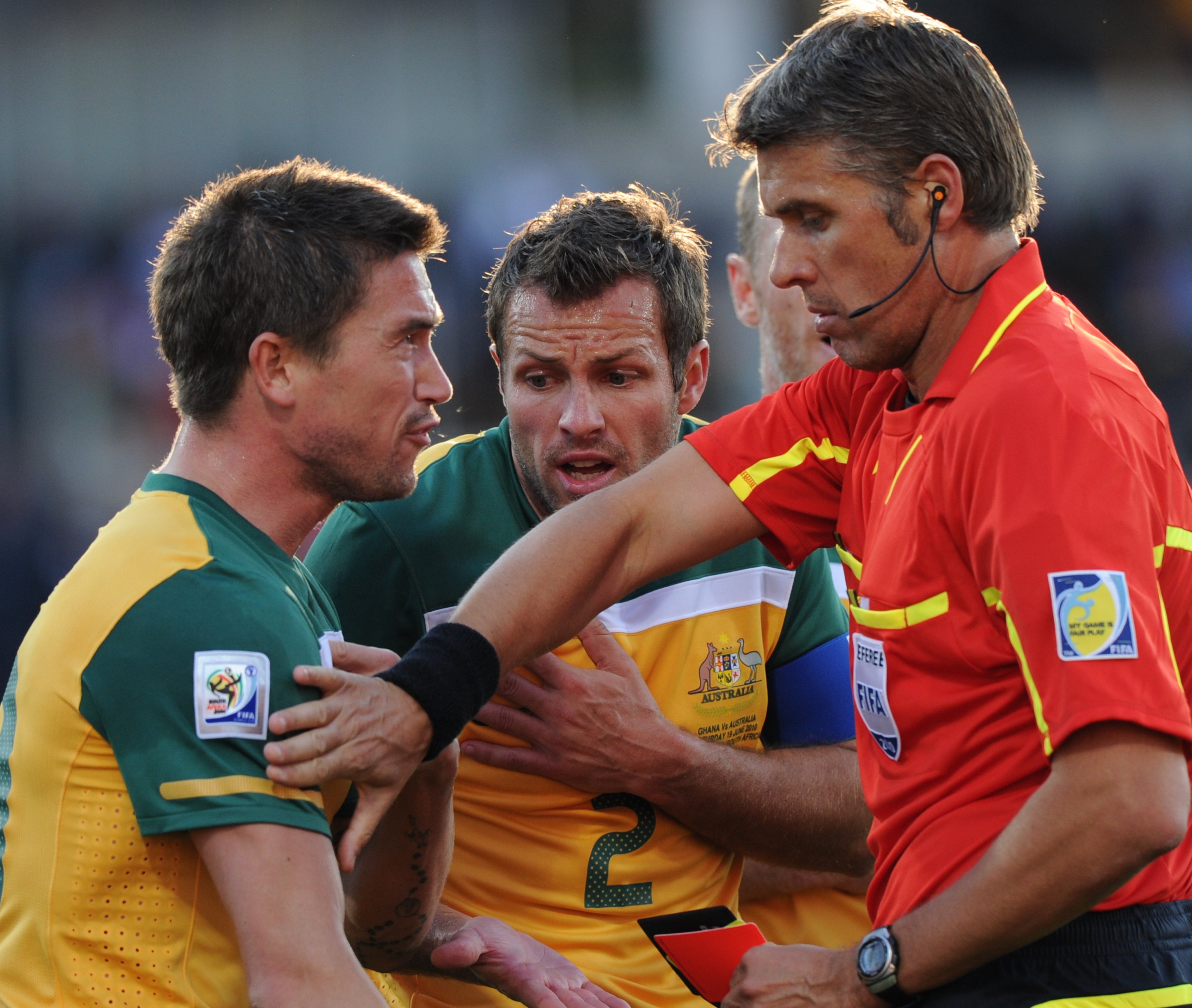 What did he do? While Kewell stood on his own goal line, his arm blocked a Ghanaian player’s shot from entering the goal. Was that his intention? Only Kewell knows for sure, though replays suggest that rather than moving his arm away from the ball, Kewell instead kept it in a position where it prevented a goal from being scored.

Was the red card deserved? Time to pull out the Laws of the Game again: A player is to be sent off for “denying the opposing team a goal or an obvious goalscoring opportunity by deliberately handling the ball (this does not apply to a goalkeeper within his own penalty area).” Seems to describe Kewell’s infraction to a tee. Australian fans were outraged to see a second red card in two games—but one of their own (former Australian referee Mark Shield) declared that referee Roberto Rosetti had “no choice” but to send Kewell off for the deliberate handball. (link)

How did the team react? Better than they did after Tim Cahill was sent off against Germany. Asamoah Gyan scored on the penalty kick that resulted from Kewell’s handball, but the Australians managed to hold on for a 1-1 draw, keeping alive (for the moment) their faint hopes of advancing to the knockout stages of the tournament. 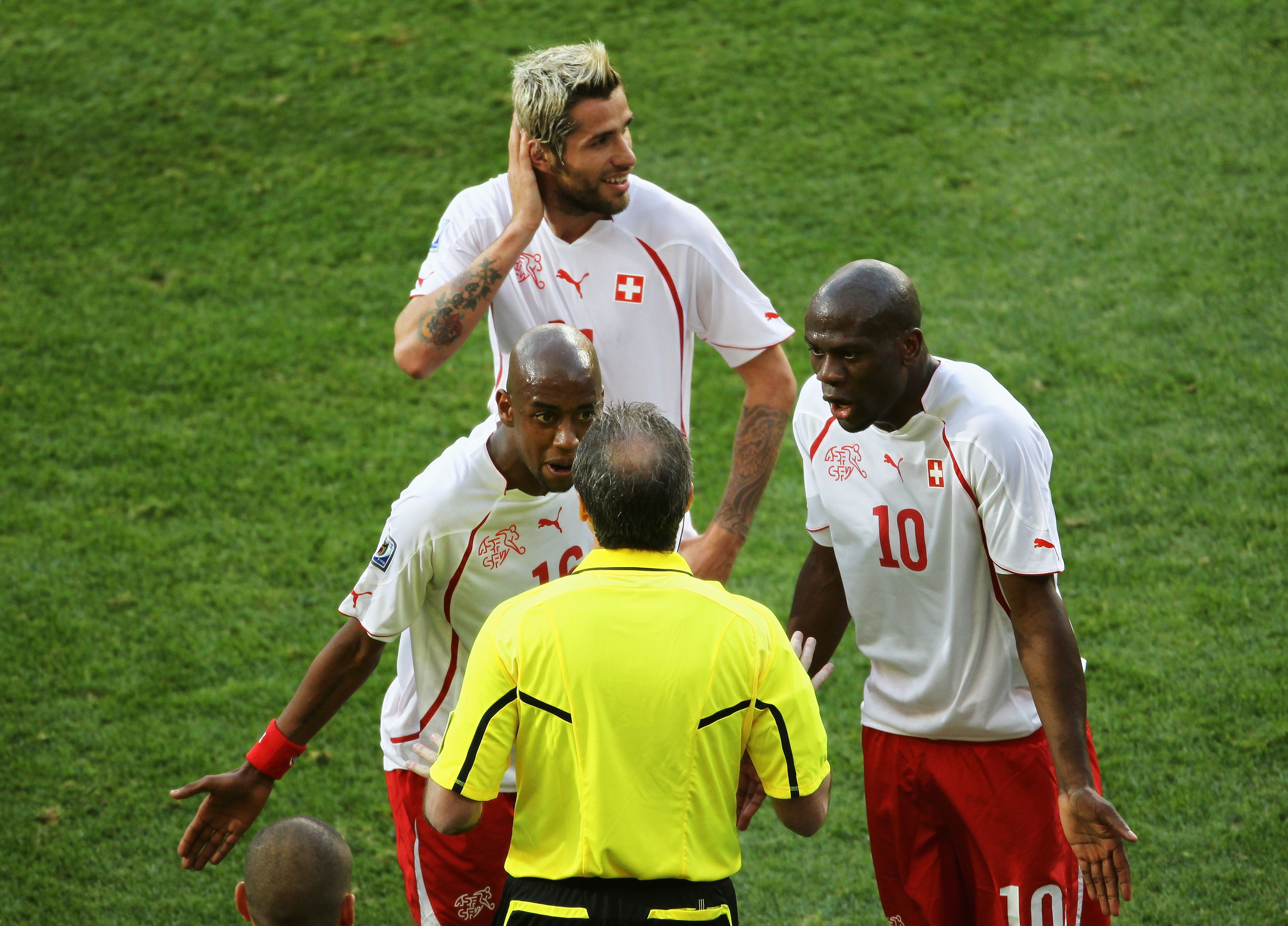 What did he do? It depends on who you ask. A Swiss fan would likely say “nothing.” A Chilean fan might say that he recklessly swatted not one, but two Chilean players in the face. A neutral person would say that while trying to shield the ball from Arturo Vidal, Behrami’s arms got a bit out of control and made some contact with Vidal’s face. Perhaps thinking Behrami’s hand carried some sort of poisonous substance, Vidal recoiled in horrified anguish (which subsided moments later upon discovery that Behrami’s hand was, in fact, not poisonous).

Was the red card deserved? Swiss fan: “No!” Chilean fan: “Yes!” Neutral fan (or, at least, the one whose words you’re reading): “Nope.” While the trend seems to be towards sending players off any time their hand makes contact with an opponent’s face, there really does need to be malicious intent in order for an incident to be considered “violent conduct.” While Behrami’s lack of control over his arms may have been reckless, it was Vidal’s reaction that ultimately produced the red card.

How did the team react? For a while, they retained their shape and kept chugging along on their record-breaking streak of 559 minutes without allowing a goal in World Cup play. But the smooth-passing Chileans ultimately broke down the disheartened Switzerland side and pushed on to a 1-0 victory. 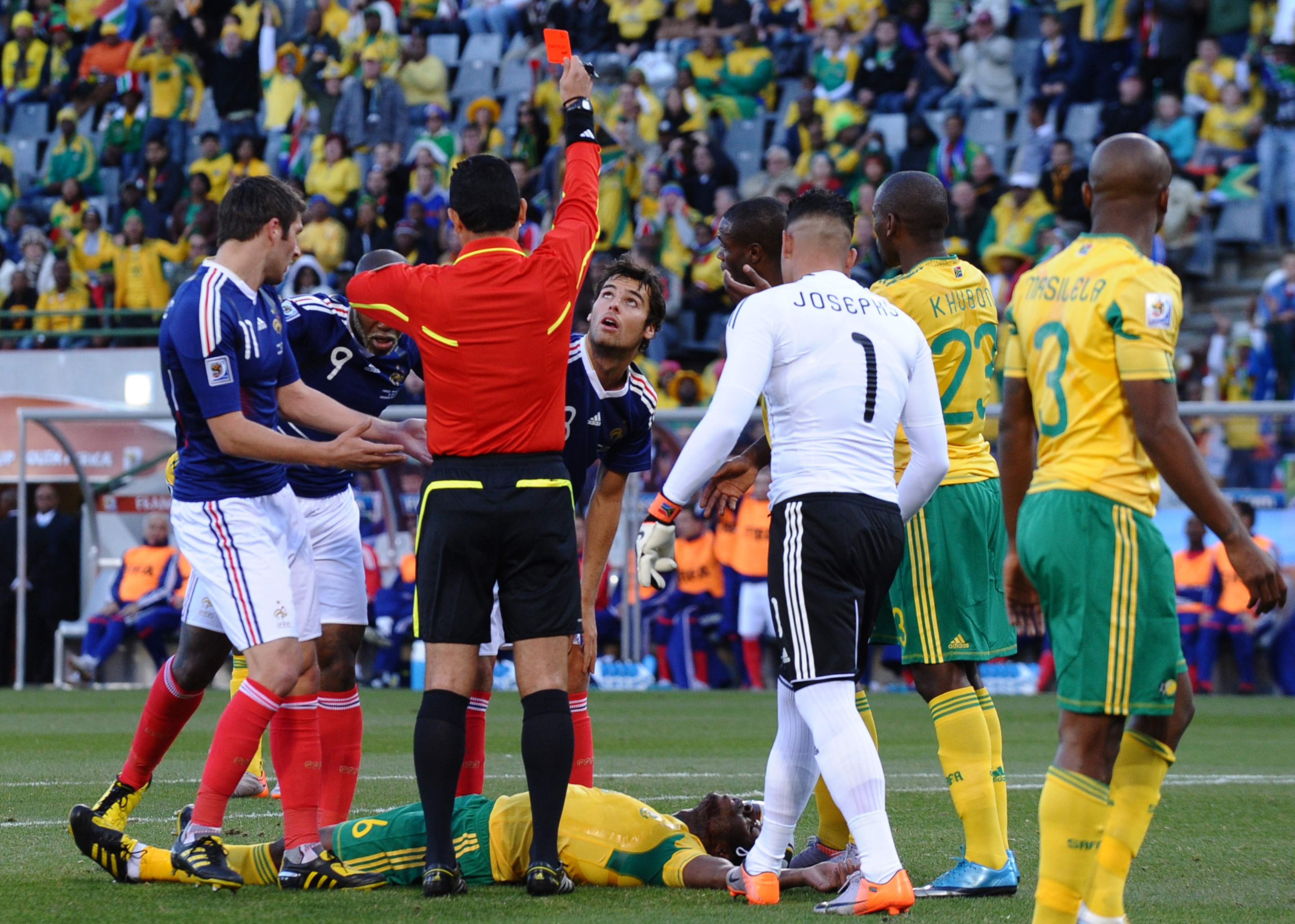 What did he do? While leaping into the air to contest a ball with Ntuthuko Sibaya, Gourcuff lead with his elbow, clattering his bent arm into Sibaya’s skull. Sibaya went down while the referee immediately reached for the red card, throwing the troubled French side into further disarray in only the 25th minute of the game.

Was the red card deserved? Referees don’t get replays, of course. So it doesn’t mean much to say that replays show Gourcuff appeared focused on the ball, and not on making jarring contact with Sibaya’s head. At full speed, though, it’s clear that Gourcuff’s forearm does crack into Sibaya’s skull, and that’s the one look the referee has to go on. Gourcuff’s teammates didn’t seem upset at the sending-off, but that likely says more about the dissension in the French locker room than their opinions on whether the call was justified.

How did the team react? It’s France’s 2010 World Cup team, so… disinterested would be a good word. Already down 1-0 at the time of Gourcuff’s ejection, they would concede another goal to Bafana Bafana before scoring a late consolation marker—which did nothing but ensure that their statistical record in 2010 wouldn’t be quite as dismal as their showing at the 2002 World Cup. 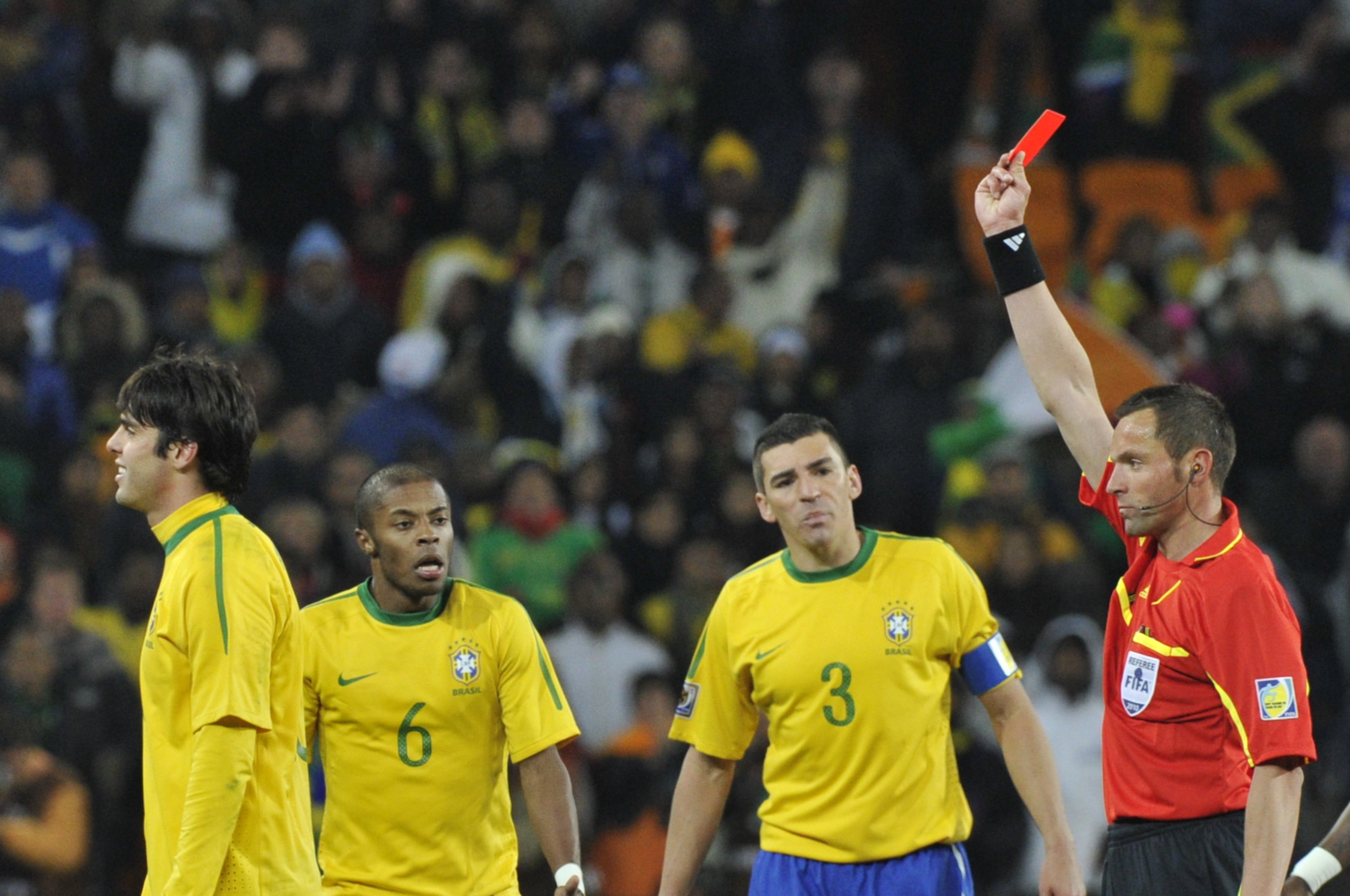 While it wasn’t a straight red, the second yellow card shown to Brazil’s Kaka (which resulted in a red) in his team’s game against the Ivory Coast was one of the more preposterous calls of the tournament thus far. And the “dishonour” goes not to Kaka, but to Abdelkader Keita, who was the “victim” of the “foul” that drew that second yellow.

Referees have a difficult enough job as it is, without players like Keita attempting to manipulate and circumvent the rules. Keita is by no means the most egregious offender in this regard.

What did he do? Pretty much stood still as the Keita purposefully ran into him and then cynically fell to the grass, clutching his face in feigned agony.

Was the red card deserved? Not on this planet. If anything, Keita deserved a yellow card for his spirit-of-the-game-destroying nonsense.