The spotlight will be on Donald Trump and France's Emmanuel Macron, who will both be making their first appearance at the General Assembly 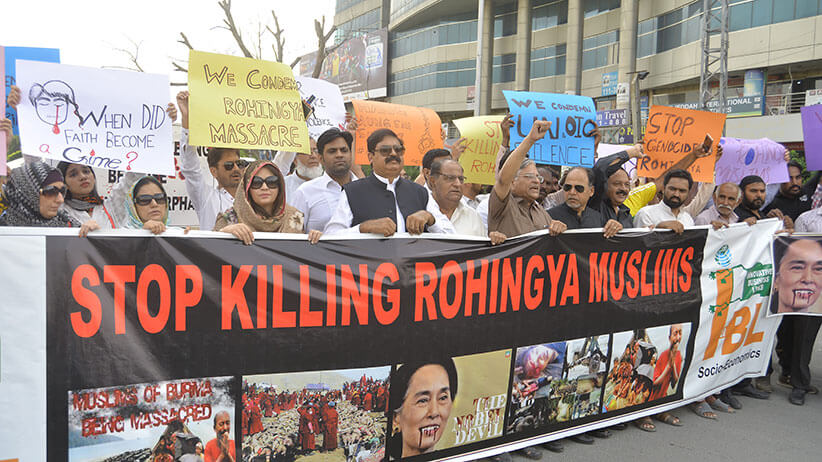 Facing an escalating nuclear threat from North Korea and the mass flight of minority Muslims from Myanmar, world leaders gather at the United Nations starting Monday to tackle these and other tough challenges — from the spread of terrorism to a warming planet.

The spotlight will be on U.S. President Donald Trump and France’s new leader, Emmanuel Macron, who will both be making their first appearance at the General Assembly. They will be joined by more than 100 heads of state and government, including Zimbabwe’s President Robert Mugabe, one of Africa’s longest-serving leaders who is said to be bringing a 70-member entourage.

While Trump’s speeches and meetings will be closely followed, it will be North Korea, which Secretary-General Antonio Guterres calls “the most dangerous crisis that we face today,” that will be most carefully watched. No official event addressing Pyongyang’s relentless campaign to develop nuclear weapons capable of hitting the United States is on the UN agenda, but it is expected to be the No. 1 issue for most leaders.

Not far behind will be the plight of Myanmar’s Rohingya Muslims, victims of what Guterres calls a campaign of ethnic cleansing that has driven nearly 400,000 to flee to Bangladesh in the past three weeks. The Security Council, in its first statement on Myanmar in nine years, condemned the violence and called for immediate steps to end it. British Foreign Secretary Boris Johnson is hosting a closed meeting on the crisis Monday, and the Organization of Islamic Cooperation’s contact group on the Rohingyas is scheduled to meet Tuesday.

Guterres said leaders would also be focusing on a third major threat — climate change. The number of natural disasters has nearly quadrupled and he pointed to unprecedented weather events in recent weeks from Texas, Florida and the Caribbean to Bangladesh, India, Nepal and Sierra Leone.

While Trump has announced that the United States will pull out of the 2015 Paris Climate Agreement, Macron will be hosting a meeting Tuesday to spur its implementation. And a late addition to the hundreds of official meetings and side events during the ministerial week is a high-level session Monday on the devastation caused by Hurricane Irma.

Several terrorism-related events are on the agenda. Macron is holding a meeting Monday with leaders of five African nations — Mali, Mauritania, Niger, Burkina Faso and Chad — that are putting together a 5,000-strong force to fight the growing threat from extremists in the vast Sahel region.

A side event Wednesday on “Preventing Terrorist Use of the Internet” will be attended by senior representatives of major social media companies. Co-hosts Britain, France and Italy said a global response is needed “to make the online space a hostile environment for terrorists.”

MORE: U.S. will not defend Canada if it’s targeted in ballistic missile attack

Trump has accused Iran of supporting terrorists and is threatening to rip up the 2015 deal to rein in its nuclear program. With a U.S. decision due in October, ministers from the six parties to the agreement are expected to meet next week. The five others strongly support the deal.

Trump has also been critical of the United Nations and has promised to cut the U.S. contribution to its budget, which is the largest. So some diplomats were surprised that the United States would sponsor an event Monday on reforming the 193-member world body.

Trump and Guterres will speak, and the United States has asked all countries to sign a declaration on UN reforms. Over 100 have added their names, but Russia’s UN Ambassador Vassily Nebenzia said Friday that “we are not sure we will sign this declaration.”

He said that while “lots of ideas contained in this document are important and look similar to what the secretary-general proposes,” UN reforms should result from negotiations among all countries instead of from “a declaration of like-minded countries.”

The Security Council is holding a high-level meeting Wednesday on UN peacekeeping operations, which cost nearly $8 billion a year. The United States, which pays over 28 per cent of the peacekeeping budget, is reviewing all the missions in an effort to cut costs and make them more effective.

While there are many side events on other global hotspots from Central African Republic and South Sudan to Libya, Mail and Somalia, the ministerial meeting will also see sessions on achieving UN goals for 2030 to end extreme poverty and preserve the planet, women’s economic empowerment, migration and conflict prevention — a top priority of the secretary-general.

Germany’s U.N. Ambassador Christoph Heusgen said the most important thing about the General Assembly ministerial session, which officially begins Tuesday and ends Sept. 25, is the opportunity for leaders to talk one-on-one or get together in groups.

“I think this is indeed the Super Bowl,” he said. “If it didn’t exist, one had to create this opportunity so that can people can talk to each other.”

He suggested a simple rule: “Treat every speaker on this podium as if he or she is our own head of delegation.”

“As long as we can use these meeting rooms to talk and reach compromises in good will, then we all have the collective opportunity to use the U.N. to make the world a better, and more peaceful place,” Lajcak said. “If we don’t do this, the failure will lie with us — not the UN.”