Worshipping ‘Saint Death’ on the rise in Mexico

And the practice is riling the Catholic church 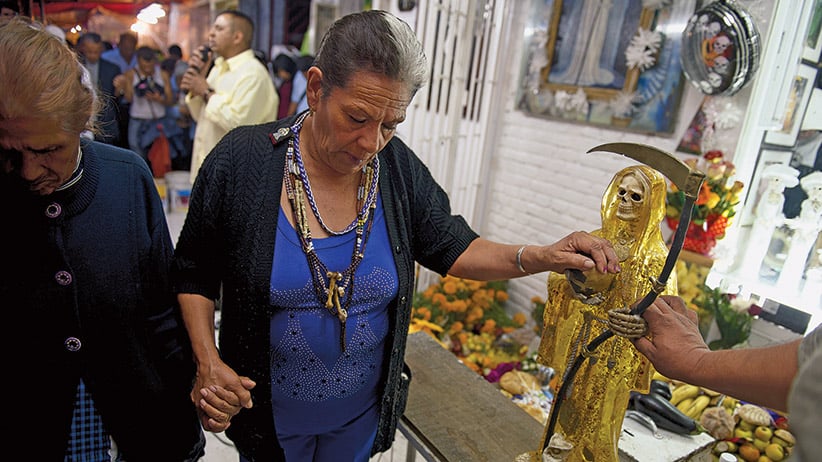 Sitting in a church pew, surrounded by skeleton statues, Enrique Vargas counsels a woman seeking spiritual support from an unlikely source: la Santa Muerte, or Saint Death. “Be strong. Believe in yourself,” she tells the single woman, who was belittled by her boyfriend and had her child taken away by an ex-husband. “She lacks self-esteem,” Vargas says after the session. “Other religions instill this in you.”

Vargas is no ordinary pastor. And Santa Muerte, who resembles the grim reaper, is no ordinary saint. Yet Vargas—known at the Santa Muerte international congregation as “Madrina,” or “Godmother”—leads worshippers on the outskirts of Mexico City in what may be Latin America’s fastest-growing new religion. The Catholic Church has condemned Santa Muerte as satanic and compared worshipping her to witchcraft. But it’s a movement quickly going mainstream and being embraced by everyone from cartel criminals and kidnappers to cops and common people. “It doesn’t matter if you’re good or bad. Santa Muerte accepts people as they are,” says Vargas. Her son, Jonathan Legaria—better known as “Padrino (Godfather) Endoque”—founded the congregation in 2008, six months before unknown assailants pumped 150 bullets into his SUV, killing him.

Santa Muerte has an estimated 10 million followers in Latin America, with most of the conversions (from Catholicism) coming in the past 15 years, according to Andrew Chesnut, author of Devoted to Death: Santa Muerte, the Skeleton Saint. The popularity poses problems for prelates and Pope Francis, as they try to turn the tide on the faithful fleeing the church and to confront their diminishing dominance in Latin America, an area almost completely Catholic a century ago. (Some 72 per cent of Latin Americans called themselves Catholic in 2010, according to the Pew Forum on Religion and Public Life.) “So many Mexicans see her as part of their folk-Catholic identity,” says Chesnut, a religious studies professor at Virginia Commonwealth University in Richmond, Va. “They don’t care if the Church has condemned her.”

Santa Muerte is commonly associated with drug cartels and crimes such as kidnapping. The Mexican government has torn down dozens of shrines—presumably, built by drug traffickers—dotting roads running to the U.S. border, and the smash TV series Breaking Bad showed hitmen praying at a Santa Muerte shrine. Vargas insists there are no criminals in her congregation; members describe their day jobs as mundane: maid, nurse, auto painter, criminologist—to name a few.

Devotees dress their Santa Muerte statues in colours coinciding with what they’re seeking: red for love, gold for financial matters and black for harming an enemy (something Vargas prefers not to practise). They light votive candles and leave gifts, such as marshmallows, money and apples to ward off bad vibes, at shrines. Cigarettes are lit and placed in the statues’ mouths, while some bring bottles of bargain-brand tequila. “It’s what the saint likes best,” says Vargas.

Santa Muerte supposedly dates to pre-Hispanic times, but Chesnut argues its origin can be traced to the Spanish, who brought her over to evangelize indigenous populations as a personification of death. “Certain indigenous groups made her a holy figure, which she never was in the European context.” The devotion went underground for centuries, until anthropologists discovered women practising love magic with Santa Muerte, pleading for help with their wayward spouses. Still, it remained secretive until a quesadilla vendor, Enriqueta Romero, placed a Santa Muerte statue outside her home in Mexico City’s tough Tepito neighbourhood—best known for bootlegged and counterfeit merchandise—in 2001. On the first day of every month, thousands of devotees descend on the shrine. “She literally took the skeleton out of the closet,” Chesnut says.

The folk saint’s ascent hasn’t gone unnoticed by the Catholic Church. “Everyone is needed to put the brakes on this phenomenon, including families, churches and society,” Cardinal Gianfranco Ravasi, president of the Pontifical Council for Culture, told the Catholic wire service ACI Prensa last year. He also called Santa Muerte “the celebration of devastation and of hell.” In Mexico City, the Church encouraged the expanding interest in St. Jude Thaddeus, patron saint of lost causes, who draws devotion from the downtrodden. Vargas seems unfazed by Catholic criticism. “We’re gaining ground because [Santa Muerte] doesn’t ask for more money,” she says, repeating the complaints from the working classes of having to pay for sacraments.

Tireless, charming and charismatic, Vargas, 55, was once a devout Catholic and describes herself as a pioneer in the karaoke-bar business. She turned to Santa Muerte after her son’s murder. “I made a pact with her,” Vargas recalls, saying she would lead the congregation in exchange for justice in her son’s case. “I have to apologize to my son for not accepting his faith” while he was alive. She celebrates services on Sundays and the first day of each month—either at a prison (devotion is strong among inmate populations) or at a site in the suburb of Tultitlán surrounded by shrines, busts of Padrino Endoque and a 22-m-tall Santa Muerte statue.

Devotees kneel, say the Lord’s Prayer and ask Vargas for blessings. They speak of the supposed miracles supplied by Santa Muerte, but also of the folk saint’s demands. “She’s very jealous. You can’t pray to another,” says Yahel Martínez, a mother of two teenagers, who left a note at Santa Muerte shrine asking that her cheating husband return. “If you promise something, you have to come through.”