Why Ukraine's 'Chocolate King' may be its next president

Petro Poroshenko is both pro-Western and liked in Russia. But his real appeal to voters in a country plagued by corruption is his wealth. 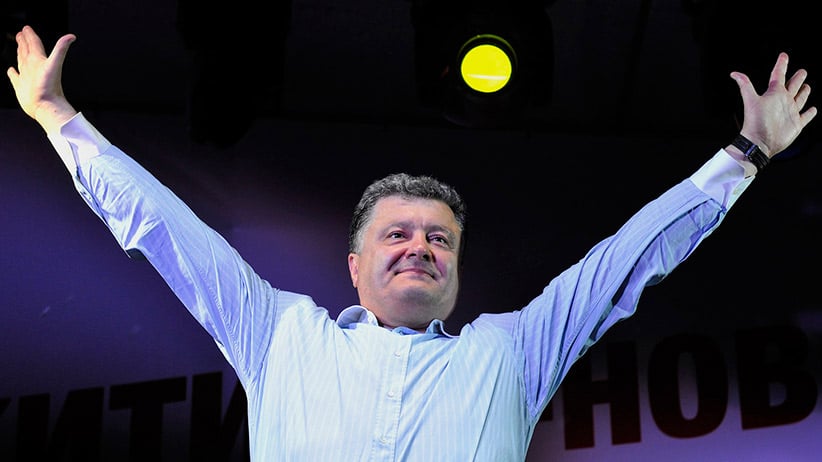 Ukraine’s election on Sunday will be a key test in the country’s attempt to restore stability and many are pinning their hopes on front-runner and oligarch Petro Poroshenko—known as the “Chocolate King” because of his candy business. His bid got a boost when former world boxing champion turned politician Vitaly Klitschko bowed out of the presidential race to run for Kiev mayor and backed the businessman.

Forbes estimates Poroshenko’s wealth at $1.3 billion, thanks largely to his Roshen Confectionery business. It is this wealth that makes the tycoon appealing to voters. Ukraine’s widespread corruption was one of the driving forces behind the Maidan protests that led to the ousting of former president Viktor Yanukovych. After Yanukovych fled, Ukrainians were shocked by the wealth he had accumulated in power: his vast luxury estate was dubbed “the museum of corruption.” Many believe the fact that Poroshenko is already rich means he would not be persuaded by money if elected.

Lydia Yuzua, 35, from western Ukraine said she supports Poroshenko because of his success in business.  “He seems like a fair businessman so hopefully he can transfer his fair methods to politics… because I think that’s what Ukrainians want, someone who is transparent.”

Poroshenko, who has businesses in Russia, may also present a way out of Ukraine’s crisis in the east where pro-Russian separatists have claimed independence. Bloomberg reported that Russian Foreign Minister Sergei Lavrov said he knows the tycoon well and does not consider him a “fascist” compared to others in the interim government. “They’ve made it clear that he’s someone that they can begin the process of dialogue with,” says Ukraine expert and senior fellow at the Atlantic Council Adrian Karatnycky, who has known Poroshenko for over a decade.

Last week, a survey by the Kiev International Institute of Sociology gave Poroshenko about 55 per cent of the vote while former prime minister and Orange Revolution icon Yulia Tymoshenko received almost 10 per cent, meaning Poroshenko could win the presidency in the first round of voting. If no candidate obtains more than 50 per cent support, Ukraine will have to wait until mid-June for a second round.

On the campaign trail, Poroshenko has used the threat of a long run-off election (and the instability it would certainly pose) to his advantage.  “If the election is not over in the first round, the second round might not take place. The level of destabilization might be such that we will have to fight for legitimacy,” Poroshenko said in the southern city of Odessa, according to the Interfax news agency.

However, Karatnycky says it is unlikely the country will elect its president in the first round. There are 21 candidates on the ballot who are likely to split the vote. Another recent poll had Poroshenko’s support at closer to 45 per cent. Some of his so-called supporters are not overly enthusiastic about his leadership, but believe that he is the best of a bad bunch of contenders. “I think the people don’t trust any of the candidates,” Yuzua says, adding that she fears any leader will find it impossible to escape Russia’s influence.

Poroshenko has campaigned on the promise of stability and prosperity. He has worked as a foreign minister and economic minister, including under former President Viktor Yanukovych. While working for an ousted leader might seem like a hindrance, Karatnycky says research shows voters regard this as a sign that Poroshenko is willing to work with others to get things done.

Strongly pro-Western, he supported the Maidan protests and his popular television channel, 5 Kanal, heavily covered the uprising leading to the overthrow of Yanukovych. However, Poroshenko was not a constant figure, rather making appearances at crucial moments so as not to seem like he was using the movement for his own political gain, says Karatnycky.

Poroshenko’s slogan is “A new way of living,” suggesting Ukraine must leave behind the turmoil of Maidan and look to the future. “After six months of revolution, conflict, separatism, I think people want stability, someone who’s consensual,”  says Karatnycky. “I think they want someone who will bring people together.”