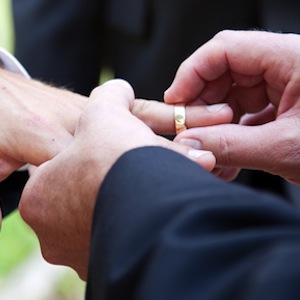 CHEYENNE, Wyo. – Same-sex marriage has arrived in Wyoming, the conservative western mountain state where the 1998 beating death of a gay student helped spark the movement that has culminated in a broad expansion of gay rights around America.

Gay couples began to apply for marriage licenses Tuesday, shortly after the state began to recognize same-sex unions, albeit far more quietly than in other places where bans were recently struck down.

More than 30 states, including Alaska and Arizona, now recognize same-sex unions in changes triggered by a U.S. Supreme Court decision Oct. 6 that refused to hear appeals from states that wanted to defend gay marriage bans.

Hundreds of same-sex couples in Idaho and Nevada flooded clerk’s offices and courthouses in recent weeks and married immediately afterward to cheering crowds.

The change remained particularly notable in America’s least populous state, where Matthew Shepard, a gay University of Wyoming student, was robbed, tied to a fence and viciously beaten 16 years ago. He died days after the attack on Oct. 12, 1998. The slaying galvanized a nationwide push for gay rights and tough penalties for hate crimes.

In the state’s largest city, Cheyenne, two couples were licensed right away, and Jennifer Mumaugh and A.J. McDaniel became the first gay couple to legally marry in the state’s most populous county.

After the state formally dropped its defence of a law defining marriage as a union between one man and one woman, Mumaugh said attitudes in Wyoming have shifted in recent years to be more open to gay couples. She said she expected gay marriage to eventually become legal, but didn’t expect it to happen so quickly.

“I’m surprised with the progress of the state and that of the people throughout the state over time,” she said.

Wyoming has joined several other politically conservative states in allowing gay marriage after a series of recent court rulings have struck down bans as unconstitutional.

Gay rights supporters have said bans on same-sex unions are violations of the U.S. Constitution’s guarantees of equal protection under the law and due process. Opponents have said the issue should be decided by states and voters, not courts.

“It’s so incredible to see all of this coming to culmination across the state,” Jeran Artery, executive director of Wyoming Equality, said. “We’ve worked so hard for this for so long and to see these loving committed couples finally have justice, and equality and freedom, it’s really tremendous.”