'You work for us!' Republicans face the music

Inside one of America's raucous town hall events, where Republican Senators are feeling the heat from anti-Trump organizers 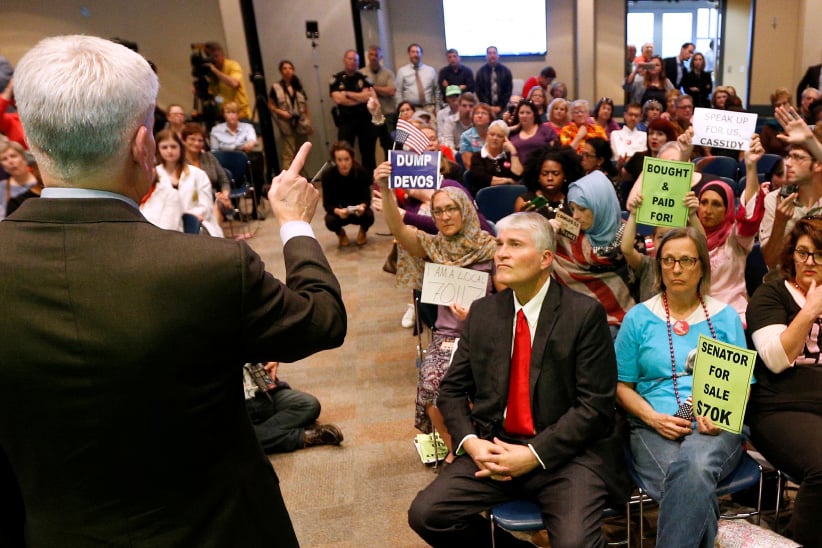 It only took Louisiana Senator Bill Cassidy a little over 10 minutes to give up.

“Let’s go through some questions,” he said. He hardly had a choice.

Many in the 200-strong crowd packed into a library meeting room in Metairie, a suburb of New Orleans, on Wednesday weren’t listening to Cassidy plod through PowerPoint slides about his new Patient Freedom Act of 2017, a “comprehensive replacement” bill for the Obama administration’s Affordable Care Act, co-written with three other GOP senators. And those who were listening could scarcely hear him above the bombardment:

“We read this online!” someone shouted.

The senator had arrived 20 minutes late, greeting an agitated crowd that had waited outside under a hot sun for two hours to see him — some shaded by umbrellas, one woman walking up and down the lines to offer sunscreen and water bottles to the hundreds of constituents. “Where is he!?” someone yelled as the 3.30 p.m. start time came and went.

A few stood up and asked their questions of the non-existent senator, followed by claps and cheers: “Senator Cassidy my question for you is do you support a select committee to investigate the ties between Donald Trump and Russia?”

“You’re going to scare him off!” one woman warned.

Cassidy arrived, with a smile, taking his place at the front of the room. A mother tearfully claimed her daughter stood to lose health coverage if the Affordable Care Act is repealed and replaced with Cassidy’s plan. “Shame on you!” she shouted, before being asked to sit down.

Raucous town halls have plagued GOP lawmakers across the U.S. in recent weeks, thrusting politicians into headlines as anti-Trump activism spreads to local politics. The crowds at Cassidy’s meeting had planned their tactics, many of them through local iterations of a national progressive network, Indivisible. The group operates as a kind of grassroots toolkit, giving novice activists nearly everything they need to start local chapters. (It says it’s spawned 4,500 of them across the U.S.).

When Trump tweeted Tuesday that angry crowds at town halls were “planned out by liberal activists. Sad!” it was a moment of actual, not alternative, facts. Planned Parenthood staff and supporters have also been in attendance, as well as the Bernie Sanders spin-off Our Revolution—an organization aimed at recruiting more progressives to run for office.

Cassidy is an easy liberal target. He’s voted in favour of every Trump cabinet appointee, including full-throated support for Betsy DeVos, the charter school advocate and education secretary whose family donated $70,200 to his campaign in 2014 (according to the Centre for American Progress). He’s lauded Trump’s Supreme Court pick, Neil Gorsuch, and cheered Trump’s executive action to push forward the Keystone XL and Dakota Access pipelines.

And if watching colleagues get booed on national TV didn’t prepare Cassidy for the town hall’s tenor, a small group of local protesters may have. Denise Holmes and Nancylee Myatt said they’d been spending most Tuesdays since Trump’s inauguration, from noon to one p.m., gathered outside Cassidy’s office here in silent protest. At first, staff wouldn’t let them inside, they said. But a few weeks ago, they began to be invited in, two by two, to ask him questions.

“I think it was so he could know what to expect today,” Holmes said.

That may explain the smile that regularly crossed Cassidy’s lips over the next hour, as he leaned on the lectern, or walked into the crowds a bit, or tapped his fingers, slowly, to the sound of an angry constituent. That, and perhaps rolling TV crews from MSNBC, Fox News and CBS, there to see how Cassidy would deflect the barbs.

He did earn a few cheers over the hour, first for taking questions from the crowd, for saying women’s health care shouldn’t cost more than men’s and for pronouncing “Muslim Americans are Americans.”

But the loudest jeers came when he defended his support for private charter schools and DeVos to run the education department. Cassidy said “most folks” in New Orleans think private charter schools are a “good development.” He suggested mothers are “usually most involved” in kids’ education. He said he “wasn’t going to apologize” for taking the DeVos family’s money: “When somebody donates to me, they sign up for my agenda. I don’t sign up for theirs.” And when New Orleans school teacher Kenny Francis pressed Cassidy on his vote for DeVos, Cassidy admitted he hadn’t attended DeVos’s entire 2.5 hour confirmation hearing.

“I fundamentally disagree!” he yelled to the crowd at one point — practically summing up the event. And he seemed happiest to annouce that time was up. “While we may disagree, we’re all Americans!” Cassidy said, as the crowd began chanting, “Do your job!”

Cassidy’s few supporters Wednesday were slightly aghast. A small group of Republican woman at the back with “repeal Obamacare” buttons seemed dumbfounded as people shouted over the opening prayer. “They can’t even pray. They’re unbelievers,” one said, while live-streaming the scene on her phone.

Waiting in line before the meeting, Republican and former Cassidy campaign volunteer Pam Clower said she goes to every town hall in the area, and the protesters are “very unusual.” Linda Vinsanau said she thought some might not even be from Louisiana, and believed others might be paid — a common Republican criticism in keeping with the White House’s view of the Women’s March on Washington. (Both women attended the Republican convention and Trump’s Inauguration.) These people weren’t, as so many have been calling them, the Tea Party of the left, Vinsanau said: “The Tea Party was a genuine movement.”

“Nobody’s getting paid,” said Joyce Vansean, lead organizer of the New Orleans Indivisible group. But few people believed their protests, anger and questions would change Cassidy’s stance on, well, anything. Maybe they could nudge him into a harder line on investigating Russia’s ties to the election or releasing Trump’s tax returns. More likely, the power of this single showing of displeasure would only be felt in aggregate.

“Let’s just say none of this changes his mind,” Vansean added. “He’s going to feel the pressure, he’s going to feel vulnerable. When re-election time comes, if anybody smells that he’s vulnerable, he will get some good competition. It’s like blood in the water to a bunch of sharks.”