'You are history. You are legend.' Canada's last Spanish Civil War vet dies 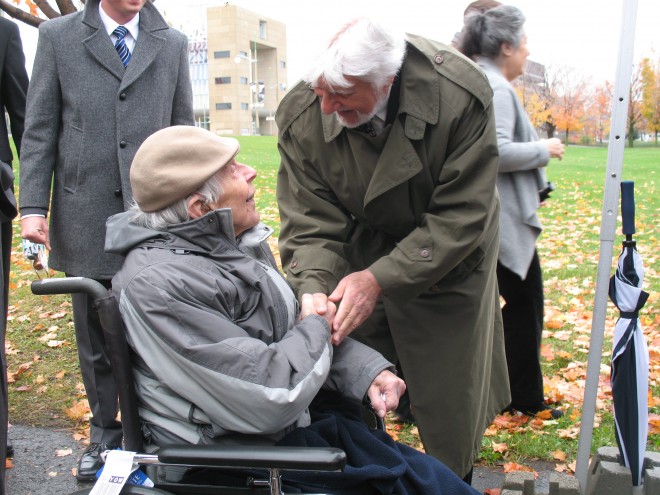 Jules Paivio, the last surviving Canadian to have fought in the Spanish Civil War, died last week. He was 96.

Paivio was one of more than 1,600 men and women who left Canada during the height of the Great Depression to confront a fascist uprising against a democratically elected Spanish government. The revolt was led by the Spanish general Francisco Franco and supported with planes, tanks, and soldiers by Adolf Hitler and Benito Mussolini.

Paivio was only 19 when he decided to join the war in Spain. He couldn’t bring himself to tell his mother the truth and said only that he was going away for a while. But as he stepped out of his parents’ cabin on the outskirts of Sudbury, he motioned for his father, Aku, to follow. He confessed his intentions as the two stood facing each other in the bitter cold. They embraced. Aku, a writer, was proud but scared. “A son’s loss, a life so young/ Perhaps forever/ That presses down on me, in gloom,” he wrote in a poem about his son’s departure.

Paivio joined some 40,000 other foreigners in the International Brigades and eventually became an officer in the largely Canadian Mackenzie-Papineau Battalion. In the spring of 1938 he was captured by Italian troops in the hills west of Gandesa and lined up with his comrades to be shot. A senior officer arrived and spared the prisoners at the last moment. Paivio spent the rest of the war in a fascist concentration camp.

“What does it do to you, not to be shot by a firing squad?” his son, Martin, asked. In Jules’ case, says Martin, it gave him a deep love of life. His remaining years involved a lot of heartbreak, including the deaths of three of his children. But Martin says Jules lived with a “glow of life” about him. Perhaps everything that came after almost dying felt like gravy.

Jules lived for almost 100 years and spent only two of them in Spain. Memories of the war didn’t dominate his life, during which he became an architect and an educator. But Spain also shaped who he was. He stayed in touch with other veterans and helped drive a campaign to get a monument to Canadians who fought in the war erected in Ottawa. He told me that once a desire to help people who are oppressed gets inside you, it never really leaves.

“You look back through life, it is the comrades and the people you are impressed by. You almost fall in love with them,” he said.

Last year he was awarded Spanish citizenship by a grateful Spanish government. Eudaldo Mirapeix, Spain’s ambassador to Canada when the citizenship process began, said that through Jules, Spain was honouring all the Canadians who came to help his country during its darkest days.

During a trip to Spain several years ago, Jules visited the prison camp where he was held, which is now a monastery. Martin says it was the only time he saw his father “not choked up, but sombre.” Memories flooded back of fellow prisoners who were shot there.

Jules was not a vain man. “He didn’t blow his own horn,” Martin says. It probably wouldn’t bother him that his passing is unlikely to be widely noted, except of course by those who loved him.

And yet his death is a deeper and wider loss. It severs Canada’s last living link to a group of idealists who looked at the suffering of citizens of a faraway country, and then didn’t look away and mutter that their pain is none of our business, but chose instead to stand, fight, and die with them.

“They gave up everything — their loves, their countries, home and fortune, fathers, mothers, wives, brothers, sisters and children,” the Spanish Communist leader Dolores Ibárruri, known as La Pasionaria, said as  the international volunteers prepared to leave Spain in 1938.

“And they came and said to us: ‘We are here. Your cause, Spain’s cause, is ours. It is the cause of all advanced and progressive mankind.’”

La Pasionario then addressed the volunteers directly. She called them a heroic example of democracy’s universal solidarity. “You can go proudly,” she said. “You are history. You are legend.”

UPDATE, SEPTEMBER 30, 2013: I noted above that Paivio was the last surviving Canadian to have fought in Spain, and he was. But I believe there is another surviving Canadian who also traveled to Spain to confront Franco, though he did not bear arms. William Khrem joined went to Spain in 1937 and joined the Partido Obrero de Unification Marxista, or POUM, a political movement and militia in which George Orwell fought. Krehm did not fight with the militia but did propaganda work for the party in Barcelona. POUM, whose members believed in a socialist revolution that included immediate land distribution and who fiercely opposed the brand of communism advanced by the Soviet Union under Joseph Stalin,  fell victim to political infighting within the anti-fascist ranks in Spain. The party and its militias were disbanded and many members were jailed or killed. Krehm himself was arrested by the communist-controlled secret police and jailed for three months before he was eventually freed. To the best of my knowledge, Krehm is alive and approaching his 100th birthday.