Can Andre De Grasse beat Usain Bolt? And what's with his arm?

Questions and answers about the world's next sprint king 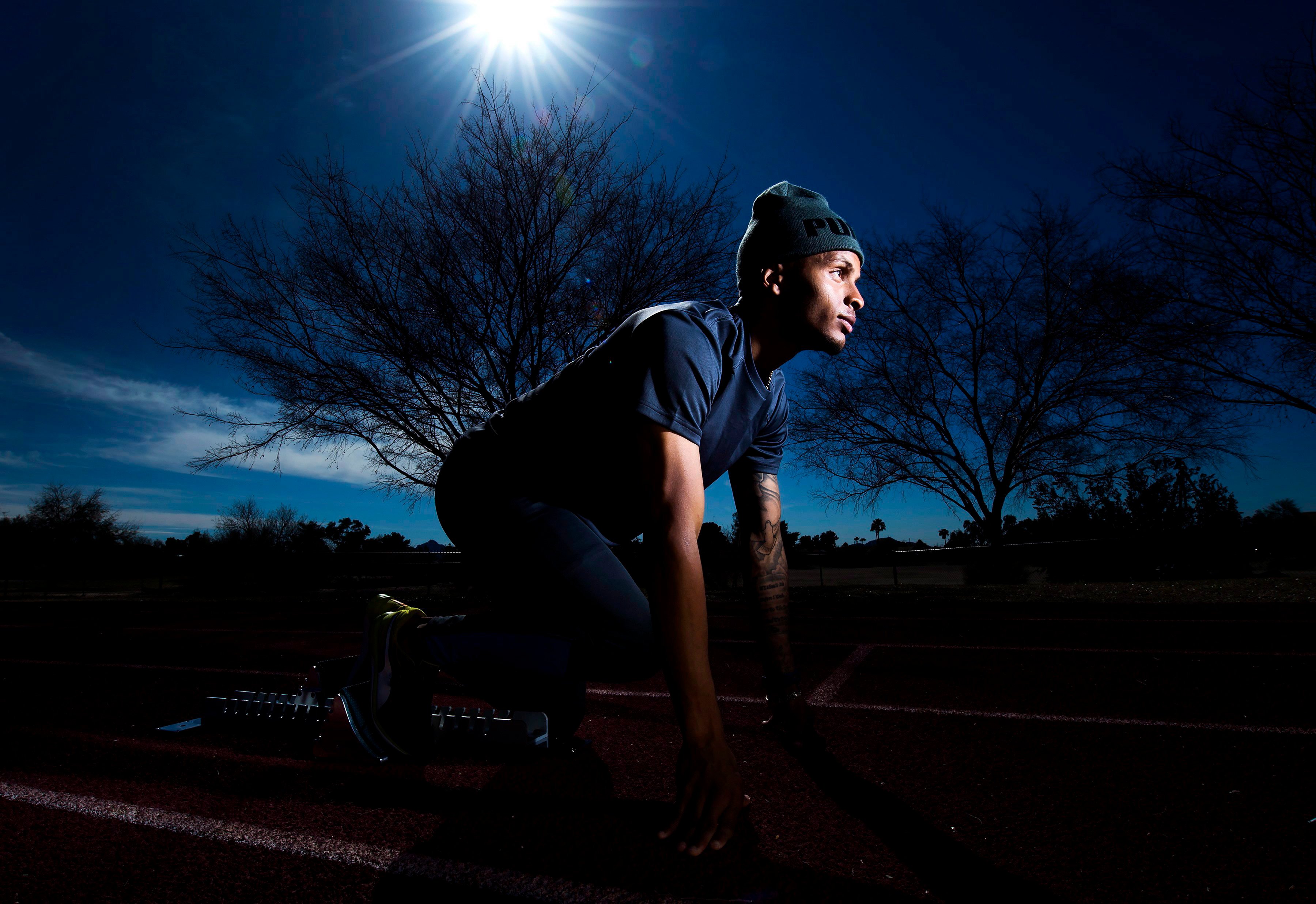 Can he beat Usain Bolt?

If Andre De Grasse wants to beat the greatest sprinter in history, he doesn’t have much time. Bolt has long stated Rio will be his last Olympics. His final race will be next year at the world championships in London. The good news—at least for Canadian sprint fans—is that Usain Bolt is getting slower, while De Grasse is getting faster. Here’s a look of their best times from the past few years: 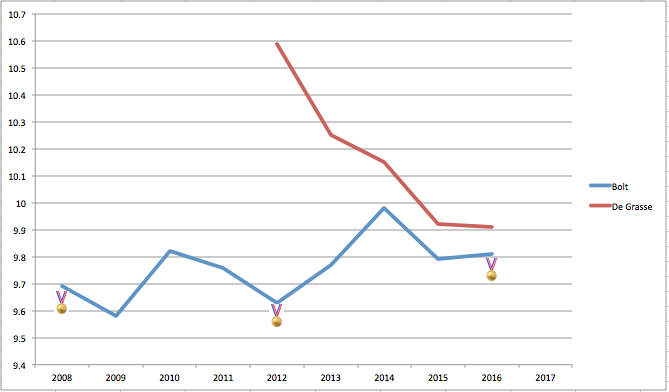 Bolt is beatable (though his world record time of 9.58, set in 2009, may never be). Yohan Blake, his countryman, outran Bolt at the Jamaican Olympic trials in 2012. Blake also won the 2011 world championship, albeit after Bolt was disqualified for a false start. American Justin Gatlin beat Bolt one year later at a track meet in Rome.

So De Grasse could add his name to an exclusive list of sprinters to beat Bolt, if even only once. Just don’t bet against Bolt.

What’s with the right arm?

His running style is unconventional, to say the least. As De Grasse pumps back his right arm, it extends out straight, unlike the 90-degree angle of his competitors’ arms (or his own left arm).

De Grasse has explained he thinks it’s the result of a balance issue in his hips. “Sometimes I have a knot in my right shoulder,” he told an IAAF reporter last year. “I think it was from back in the day, a little injury from basketball.”

That “little” injury has had a big influence on his form. The adage “if it ain’t broke, don’t fix it” doesn’t apply to De Grasse. He’s not the fastest man in the world, and he’s trying to fix what’s been dubbed the “Andre Arm.” “I think if I can fix it, it will help me [get] a lot better with my drive phase and my acceleration,” he said. “And I would be able to go a lot faster.”

What’s with the bromance with Usain Bolt?

When De Grasse won bronze last year at the world championships, Bolt interrupted a TV interview with the Canadian to express his congratulations. The reporter then asked Bolt if, before that race, he even knew who De Grasse was. “To tell you the truth, no,” Bolt said, before addressing De Grasse again: “Great job. That’s all I can say.”

One year later, lots has changed. They gave each other a quick slap of the hands during a reset after a false start during the semifinals. After Bolt won gold and De Grasse bronze, the two embraced with Bolt telling De Grasse that he warned  fellow Jamaican Yohan Blake, a former Olympic silver medallist, to watch out for the dark horse Canadian.

“He runs just like me,” Bolt said of De Grasse after the race. “He’s slow out the blocks, but when he gets going, he gets going.”

Their bromance even has a nickname: DeBolt.

Is De Grasse the fastest Canadian since Donovan Bailey?

De Grasse is the third-fastest Canadian to ever run the 100-m dash, but he’s not the fastest since the beloved 1996 Olympic gold medallist.

Bailey set a then-world record at the Atlanta Games with a time of 9.84, but Bruny Surin tied the national record in 1999 running 9.84 at a meet in Spain. (Surin lost the race to American Maurice Green’s time of 9.80.)

All that said, Bailey recently predicted the Canadian record he and Surin share will soon be broken.

What are the chances De Grasse wins gold in at the next Olympics?

Pretty good. Bolt has long repeated he won’t be back. (His coach has suggested otherwise.) Rio’s silver medallist, Justin Gatlin, would be 38 years old if he wanted to win his second 100-m Olympic gold in 2020. (He won at Athens in 2004.)

With the two best sprinters today likely gone—or at least, one would imagine, well past their prime—De Grasse’s main competition would be former world champion Yohan Blake and American Trayvon Bromell, who won bronze at the worlds last year (a tie with De Grasse, both running 9.92 seconds). De Grasse beat them both in Rio.

Many experts consider De Grasse the next king of the sprint world, which figures into why Puma signed him to a reported multi-year US$11.25-million contract. A lot can change before the 2020 Games, of course. Four years ago, no one had ever heard of De Grasse.

For a longform read on how De Grasse fast tracked the 100-m dash, read this profile by Sportsnet Magazine‘s Evan Rosser.