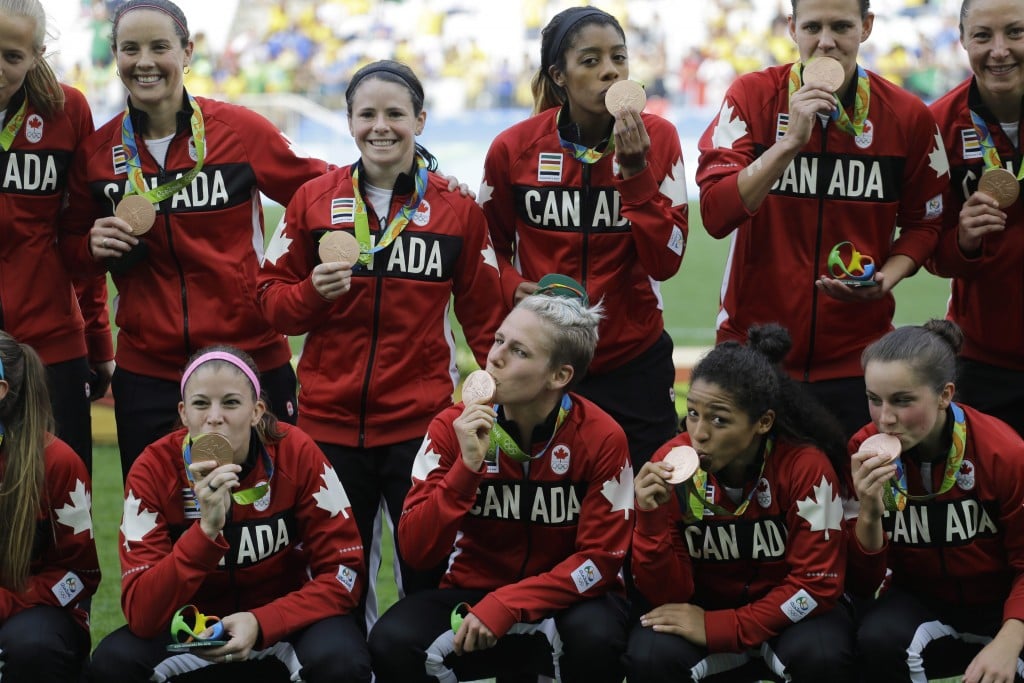 Canada team poses for photos after winning the bronze medal in the women’s Olympic football tournament between Brazil and Canada at the Arena Corinthians stadium in Sao Paulo, Friday Aug. 19, 2016. (AP Photo/Nelson Antoine)

This is the second time Canada has won back-to-back medals in a team summer sport, following lacrosse at St. Louis 1904 and London 1908.

“I was not going to leave this tournament without a medal around my neck,” said a tearful Sinclair after the match.

The 10th-ranked Canadians returned to their winning formula – defending well and being opportunistic on attack. Eighth-ranked Brazil threatened on set pieces but was unable to break down the Canadian backline with one exception.

That was in the 79th minute when a high ball into the box bounced in and found Beatriz, who turned and knocked it in, bringing the crowd to its feet and restoring hope for the home side.

It made for a tense ending with Brazil playing all-out attack and the Canadians defending like their lives depended on it. Goalkeeper Stephane Labbe made some cool saves to preserve the win – only to be flattened by Rafaelle in the dying minutes.

Brazil outshot Canada 15-7 (but trailed 5-3 in shots on target). Eleven of those Brazilian shots came in the second half.

The crowd chanted “Brazil, Brazil” as the clock wound down. But the Canadian women refused to break even though the three minutes stoppage time felt like an eternity.

“We knew the Canadians were very very strong, especially physically,” he added.

The Canadians rushed the pitch to celebrate while the crowd, never wavering in its support, chanted for its team. Sinclair, for so long the face of Canadian soccer, was sobbing as organizers set up the podium for the medal presentation.

It turned out to be a perfect Olympic finale for coach John Herdman’s team, a blend of wide-eyed youth and experience, with goals coming from the 17-year-old Rose and 33-year-old Sinclair.

Sinclair, earning her 250th cap, typified the Canadian effort. She was all over the field, looking to set up attacks or blunt Brazilian attacks.

It marked Canada’s fourth game at Corinthians Arena, where it had won the previous three. But this time a hostile sea of yellow and green greeted them.

While the wall of sound was solidly in support of the home side, it was also compelling evidence of the pressure the Brazilian women were under to secure a medal on home soil. The Canadians knew all about such expectations, having hosted the World Cup last summer.

“It was pretty surreal. The whole experience,” said Herdman. “The crowd was vibrating.”

Herdman sprung a surprise by not including 22-year-old forward Janine Beckie, the team’s leading scorer here with three goals, in his starting lineup. Beckie, Sophie Schmidt and Rhian Wilkinson made way for Diana Matheson, Rose and Josee Belanger.

A team spokesman said the decision not to start Beckie was tactical rather than injury-related.

Rose started up front, providing extra pace on the right flank, with Matheson adding her guile and 191-cap experience behind her in midfield.

The move paid dividends in the 25th minute after a lung-busting run down the left flank by fullback Ashley Lawrence ripped open the Brazilian defence. As two Canadians raced to the other side of goal, Lawrence sent over a perfect cross and Rose tapped it in for her fifth goal in 20 matches for Canada. 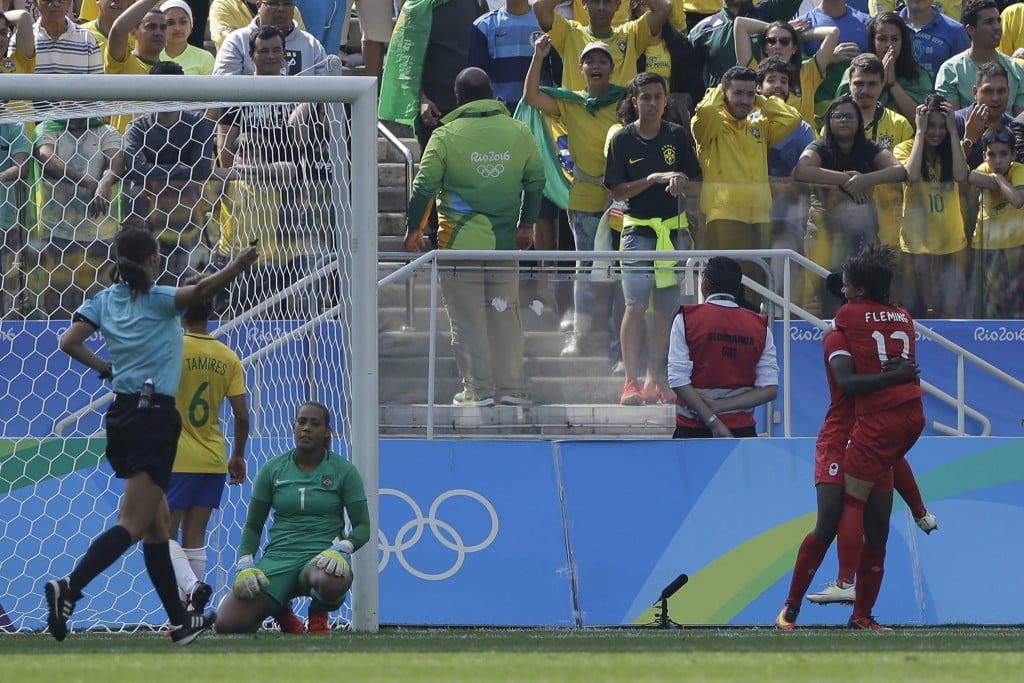 Despite an early second-half surge by the home side, Canada padded the lead in the 52nd minute after Jessie Fleming pickpocketed a Brazilian and danced her way around several defenders on the right flank. She found Rose in the penalty box who in turn found Sinclair who found the net with her second attempt for her 165th goal.

Herdman celebrated on the sideline, punching his fists in the air.

Labbe tipped a Brazilian shot off the crossbar soon after and Rose hit the crossbar at the other end with a shot in the 58th minute. The teenager exited one minute later after a storming game, replaced by defender Allysha Chapman as Canada looked to shut the door on the Brazilians. Beckie came on in the 69th minute to provide fresh legs up front.

The Brazilians kept pressing, coming close on a header off a Marta feed that flashed just wide in the 76th minute. Canada adopted a defensive formation with five at the back.

Second-ranked Germany met No 6 Sweden for gold later in the day at the Maracana in Rio.

The vocal crowd cheered every Brazilian move from the get-go, booing the Canadians in turn.

Canada (5-1-0) came close in the eighth minute when Lawrence was hacked down outside the penalty box. Sinclair beat goalkeeper Barbara on the ensuing free kick but hit the crossbar from 25 yards out.

Ignoring the crowd, the Canadians began to build attacks and looked to close down the Brazilians whenever they had the ball. The Canadian defence stepped up as needed, with forwards like Sinclair tracking back to aid the cause.

The Brazilians (3-2-1) threatened on set pieces, sending in balls into the box but could not convert.

Lawrence came close in the 67th minute, forcing a diving save from Barbara.

The Brazilian women have been a popular draw at the Olympics. According to FIFA, the average crowd for the Brazilians averaged 46,000 in their first five games at the tournament, well above the 31,000 average for Palmeiras and Corinthians, the top-drawing team in the Brazilian men’s championship.

Brazil showed off an explosive offence early, scoring eight goals in total against China and Sweden but was blanked the next three games. At the other end, it had conceded just one goal in its five matches prior to Friday.

Both teams had to pick themselves up after demoralizing semifinal final losses: Canada was beaten 2-0 by Germany while Brazil went down in a penalty shootout against Sweden. 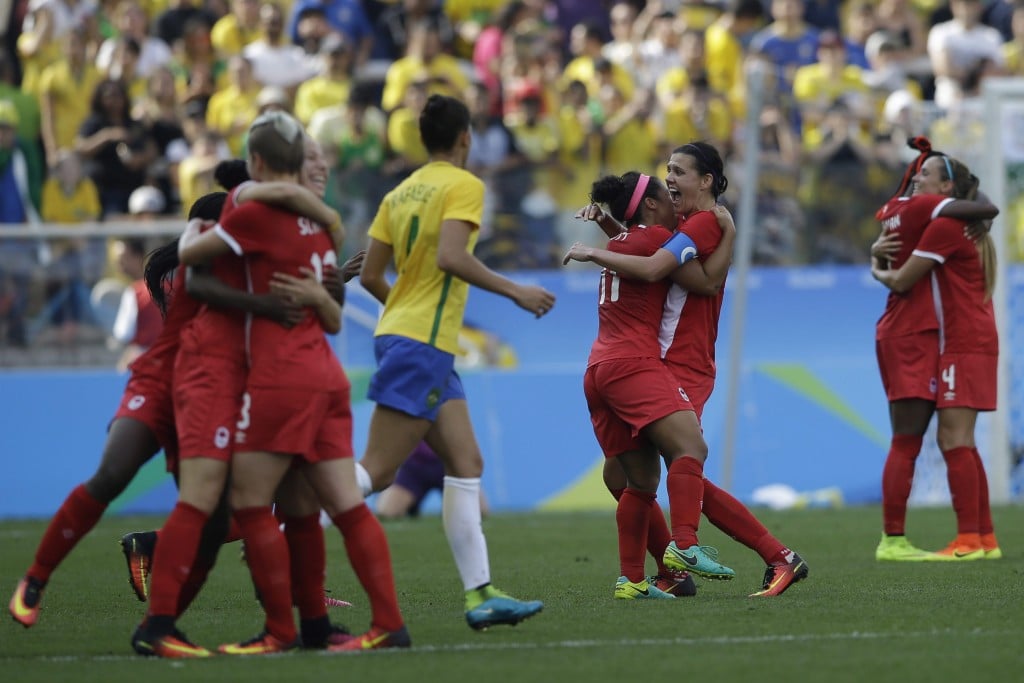 The Canadian women had already made history by beating Germany in round-robin play – their first ever win over the Germans – and believed they could have done it again had they played at their best.

Canada had a perfect run prior to the semifinals: beating Germany, No. 5 Australia and No. 93 Zimbabwe in the preliminary round before downing No. 3 France in the quarter-finals. Brazil beat Sweden and No. 12 China and tied No. 52 South Africa in the pool stage before dispatching Australia on penalties in the round of eight.

Canada and Brazil know each other well. Friday marked their sixth game in eight months, including a pair of friendlies in Canada in June.

Prior to Friday, Brazil took three of those games to Canada’s two. But the Canadians won 1-0 last time out and beat Brazil 2-1 in the final of the Algarve Cup. Beckie scored the winner in both matches.

Going into the match, Canada’s record against Brazil was 6-7-6.

The day started as all the other game days have done for Canada, with Sinclair walking out alone for a quiet moment alone in the centre of the field prior to warmup. Ben Harper’s “Diamonds on the Inside” played over the PA system.

As she left, a group of six teammates went to centre field for an extended huddle. Their soundtrack was “Don’t Worry, Be Happy.”

The referee was Romania’s Teodora Albon.