The journey to Rio was difficult for the women's team, the path to the podium even harder 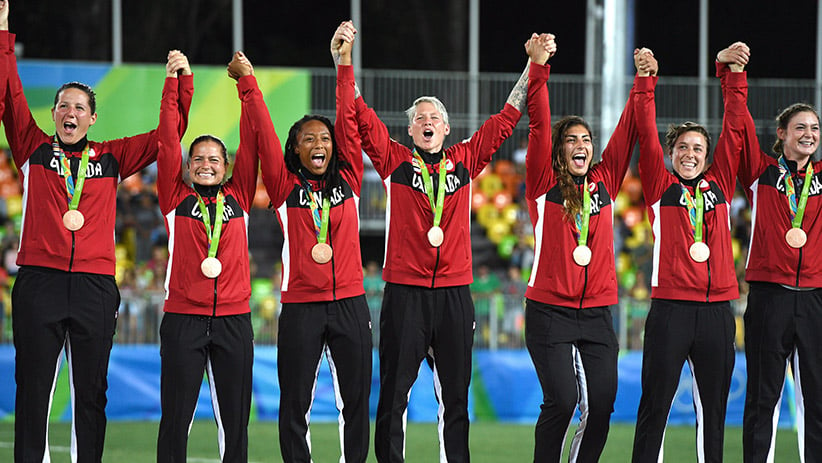 The defining moment wasn’t a try, or a tackle. It was a sacrifice.

With three minutes left, and the bronze medal already all but in the bag, Jen Kish showed why she’s the unquestioned leader of Canada’s women’s rugby sevens squad. As her team gobbled up a loose ball and surged toward Great Britain’s goal line yet again, the 28-year-old Edmontonian gave up her body to make a pass. Stretched out, with her head turned away from the tackler, she got pulverized. But the ball stayed alive, and 10 seconds later, Ghislaine Landry stepped around a defender and walked in for her third try of the match, and a truly unsurmountable lead.

Subbed out for the final seconds of the game, Kish stood on the sidelines, close to tears, as the crowd sang O Canada, in both official languages. When the horn blew and the medal—Canada’s third of the 2016 Summer Olympics—was made official, she ran on to the field, leapt for joy, then fell to her knees and bawled like a baby.

“I was just so overwhelmed,” she said a few minutes later, tears and sweat still mingled on her face. “It just shows how much passion we have for this game and each other.”

The journey to Rio was difficult, the path to the podium even harder. Canada blew out Japan and Brazil in its first two games, winning by a combined score of 83-0. Then, in their final pool match Sunday night, they suffered a humiliation of their own, losing 22-0 to Great Britain. A gritty, 15-5  comeback win over France in the quarter-finals put them into the semis. But the dream of a top-two finish died with a 17-5 loss to Australia, the top-ranked team in the world, and now winners of the first Olympic sevens gold.

After three hours spent in the locker room dwelling on their errors and reviewing video, Canada stormed on to the field for the rematch with the U.K. squad, delivering their best game of the tournament, scoring early and often.

“Honestly they came out a little pissed off about the way they played against Australia,” John Tait, Canada’s head coach explained. “They left a lot of opportunities on the field in the semifinal. They just didn’t connect. So the girls just challenged themselves to come out and play as hard as they could for 20 minutes.”

After the hugs and tears, and a short victory lap with the Canadian flag, Kish climbed into the stands to embrace her father, Steve. He raised her and her brother as a single parent. But a year ago, when his daughter led the Canadian side to a PanAm Games gold in Toronto, he was on an operating table undergoing emergency cancer surgery. In that tournament and the ones after she took to scribbling “Ruck Cancer” on the tape around her wrists as a tribute to her dad. Olympic rules wouldn’t allow her to display the message in Rio, but it didn’t matter as much now that Steve is in remission and well enough to attend the Games. Watching his daughter play and win was an almost indescribable experience, he said. “It’s 10 to 12 years of joy unleashed in one day.” 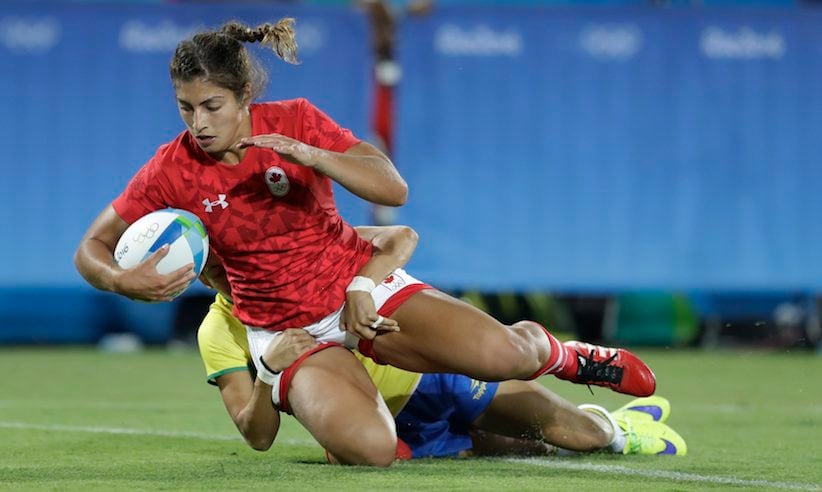 From the very first game, Steve Kish had a sense that something special was in store. “It was history in the making for Canadian sports, women’s rugby,” he said. “Every step that those players made was history. It was phenomenal.”

Karen Paquin, who opened the game with her third try of the tournament for Canada, said the Olympic experience had exceeded her imaginings. “There’s so much energy. The people, the colours, the atmosphere,” she said. “Even without the medal it still would have been worth it. I’ve grown as a person. I have so many good memories and I have friendships that will last for life.”

Rugby’s return to the Olympics—the traditional, 15-a-side version was a medal sport at four Summer Games between 1900 and 1924—has been a mixed bag so far. It looks great on TV, and sounds even better, with the refs and coaches mic’d. (“Stop feeling sorry for yourselves,” Fiji’s British coach, Chris Cracknell, snapped at his charges during half-time of their final game, a loss to Spain.) But the stands of the remote Deodora Stadium have been half-empty.  The hope remains that the fast-paced, high-scoring mini-games—they last just 14 minutes in the early stages, and 20 in the finals—will draw a youthful audience and help grow the sport. And since Matthew McConaughey showed up Monday to watch the U.S. team edge out Fiji, 12-7, in a contest to determine who will finish fifth or sixth, maybe it’s working.

The game is already strong in Canada. The women’s squad finished third in the world sevens series in 2015-16 and were second in 2014-15. And there’s plenty of fans—more than 20,000 showed up to watch both the women’s and men’s sides win PanAm gold last summer. (The Canadian men failed to qualify for Rio.) But this Olympic bronze will surely help it grow even faster.

“Playing in the Olympics wasn’t in my plans,” said Paquin. “It was something that was so far away, it was a cloud at the very end of the corridor.”

On Monday in Rio, the women’s squads from Australia, New Zealand and Canada stepped onto an extra-large podium and forged someone’s future for Tokyo 2020, or beyond.

“Maybe little girls are going to pick up a ball now and discover it’s a great sport,” said Paquin. 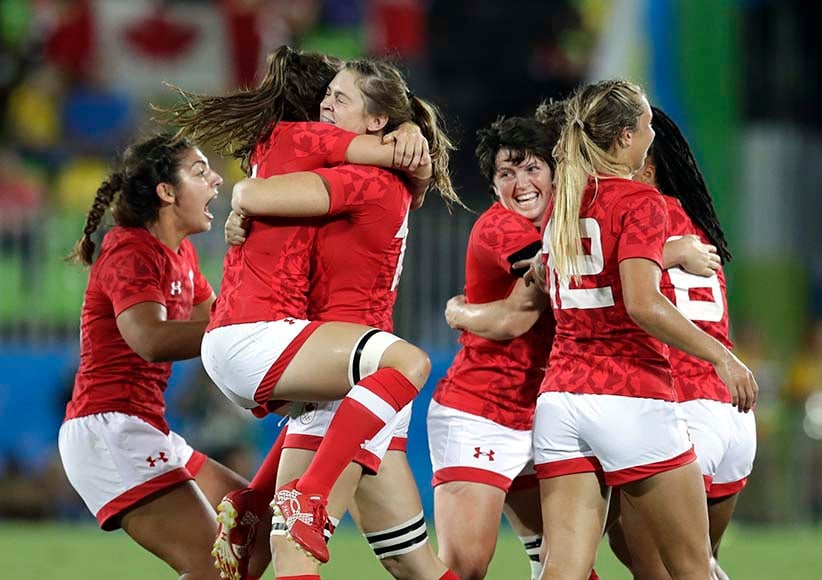