The Young and the Fast: Canada wins relay bronze in Rio

'Now that we are here, people are going to be surprised at what we do,' 16-year-old says of Canadian swimmers at the Summer Games 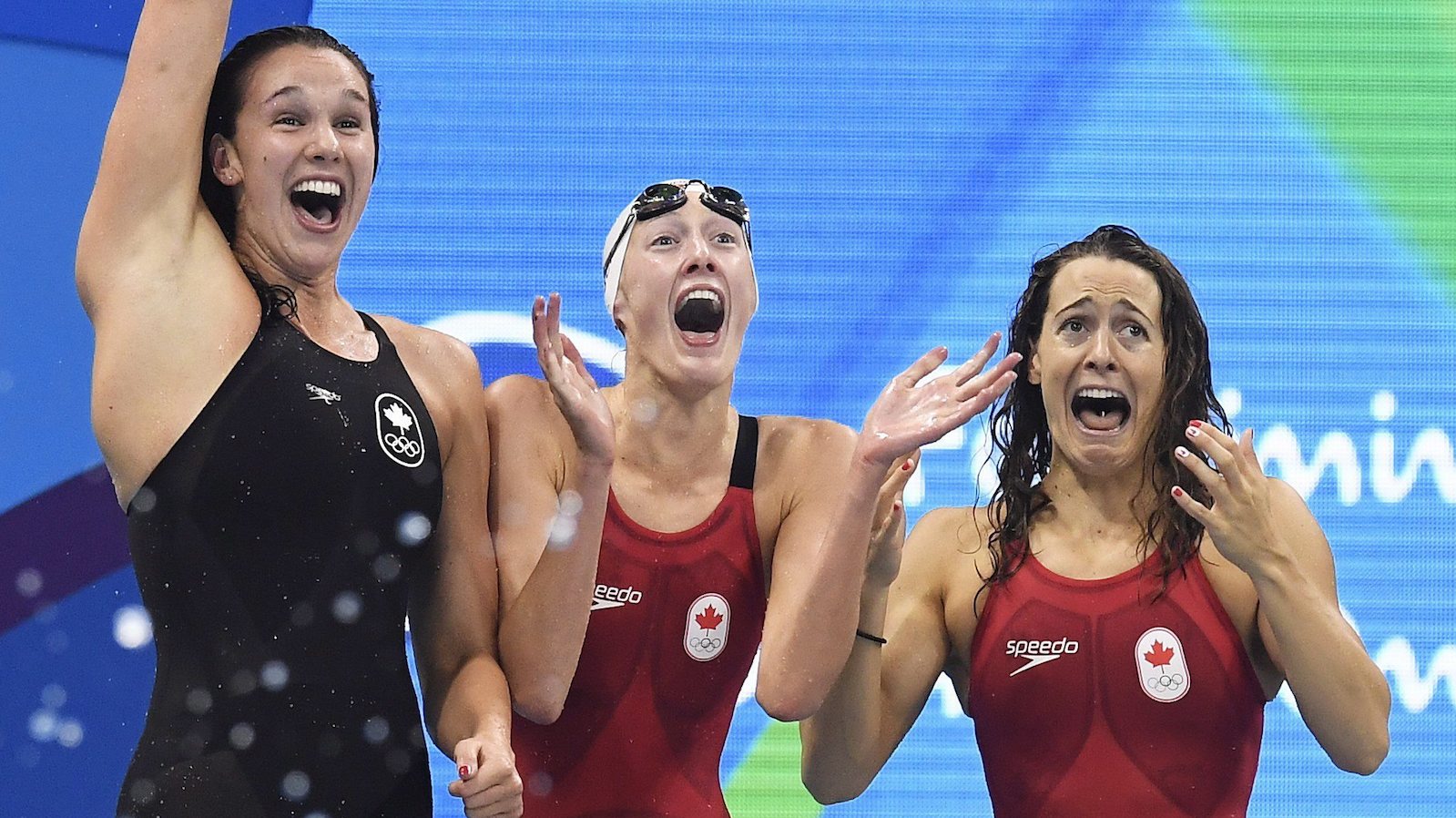 They played Boston’s More than a Feeling as Canada’s 4 x 100 women’s freestyle swim relay team celebrated a bronze medal—the country’s first hardware of the Rio Games. Maybe the DJ at the Olympic pool thought he had to. But a song that topped the charts in 1976 couldn’t have had much significance to a quartet of athletes with a combined age that is roughly equal to Paul McCartney’s.

The eldest, 24-year-old Sandrine Mainville, from Boucherville, QC, cried as they stood on the podium, next to the victorious Aussie team, and the silver-winning Americans. Chantal Van Landeghem, 22, from Winnipeg seemed on the verge of following suit. But then there were the 16-year-olds, Taylor Ruck and Penny Oleksiak, looking like this sort of thing—winning a bronze medal on your very first try, at your very first Olympics—happens every day.

“I’m definitely not one to cry easily but I was about to,” Ruck said afterwards, her hair still wet and the green-ribboned medal hanging around her neck. “I was definitely overwhelmed with emotion.” There was joy, and pride, and for a young woman who was born in Kelowna, B.C., but has lived in Arizona since she was a baby, a new and profound connection with her homeland. “I feel 110 per cent Canadian now!” said Ruck. And a little bit embarrassed about applauding their competitors so fiercely on the podium that she dropped the Rio Games symbol she had been given, and it broke.

For Oleksiak, the Scarborough native who burst onto Canada’s swim scene this past spring, winning two golds and a silver and setting two new national records at Olympic trials, it was second race of the night. Just an hour earlier, she had qualified for Sunday’s 100m butterfly final, with the fifth fastest time overall. (In the morning heats she was third.) An old reporter wondered if she might be tired, after her semi-final and swimming the all-important anchor leg to secure the bronze. “Not really,” Oleksiak explained patiently. “I’m only 16 and I don’t get as much lactic acid. An hour is so much time for me. When I was in age group meets I had maybe five minutes between the races.” Back in the old days. 2015.

It’s been a long time since things came this easy in the Olympic pool for Canada. Forty years, exactly since another women’s 4×100 m relay team opened the Montreal Games with a bronze, part of an eight medal haul. There were 10 medals in the 1984 L.A. boycott Olympics, and then not many since. Mark Tewksbury’s backstroke victory in Barcelona in 1992 was the last gold. Marianne Limpert had been the last Canadian woman to win a swimming medal—a silver in the 200 IM, 20 years ago in Atlanta. In Athens, there were no medals at all. In Beijing, just one bronze. And four years ago in London, a silver and a bronze. 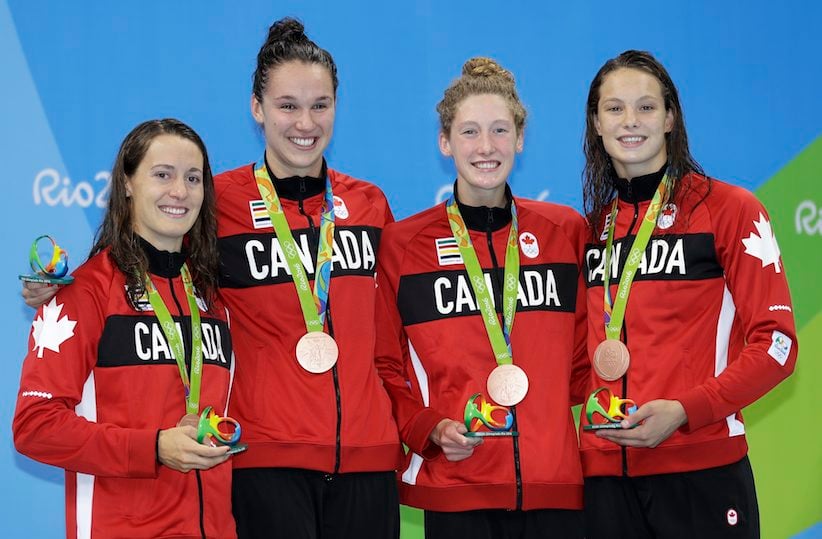 One shouldn’t count chickens before they swim, but Rio’s fast pool and Canada’s young talent seem like a good match. Oleksiak thinks the bronze might prove contagious. “No one really expected this of Canada coming into the meet, but now that we are here, people are going to be surprised at what we do,” she said.

Earlier in the evening, Emily Overholt, placed fifth in the women’s 400 Individual Medley final, dropping off in the late stages of a blistering race that saw Katrinka Hosszu of Hungary win gold—and shave more than two seconds off the world record. The Vancouver swimmer, who opened eyes and raised expectations last year with three medals at the Pan Am Games, and a bronze at the World Championships, has been dealing with a hamstring injury. Although only 18, she says she feels like a veteran now. And that a new, youthful attitude has taken over Canadian swimming. “I don’t think it’s intimidating going out there and competing. You see it through different eyes. I think when you’re really young you just go out there and have fun,” she says. “When you’re a little older, maybe you go out there and put pressure on yourself. There’s a bit more at stake.”

Related: Six top athletes on their dreams for the Rio Olympics

The young and the fast are even making waves within their own team. Michelle Williams, a 25-year-old from Toronto, swam the third leg of the relay heats in the day session only to see herself dropped for Oleksiak in the evening final. She still gets a medal, but her disappointment was real. “This morning, I had the swim of my life. I couldn’t have done more to get this team into the final. When I found out I wouldn’t be swimming tonight, first I was a little shocked,” she said. “I gave myself about 30 minutes to be upset about it, then I reshaped my mindset to just support the girls. Just watching them go out there, there were so many emotions in my head. I cried and I screamed. It was so crazy to realize when Penny hit the wall that that was a medal for me too. It was awesome.”

Canada capped its opening day in Rio with bronze in the women’s 4×100-metre swim relay, adding some hardware to what was a fantastic day for the nation’s women’s teams.(Michael Sohn, AP)