'The result was about giving our best and that’s what I did. I knew I was strong,' cyclist says of fight for the finish 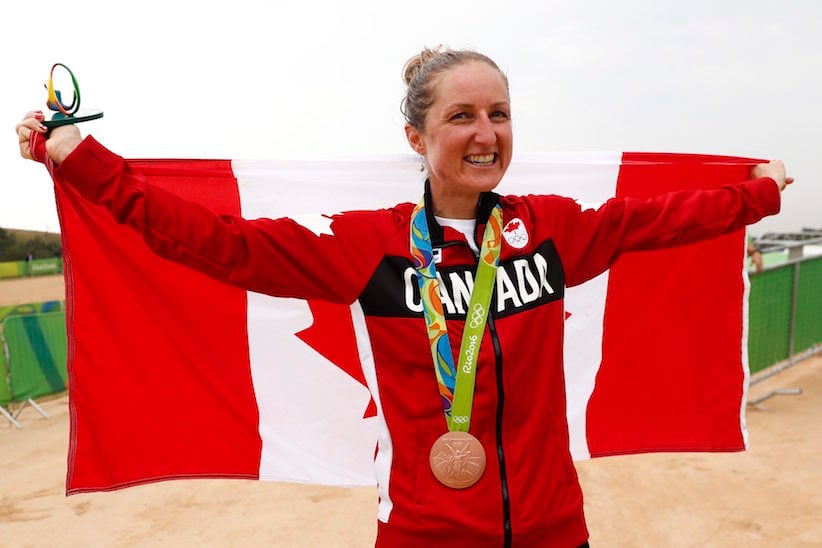 Everything went wrong for Catharine Pendrel. Coming out of the start loop at the women’s mountain bike competition in Deodoro, Saturday afternoon, she touched wheels with another rider and went down in a tangle of limbs and carbon-fibre frames. By the time she got back in the saddle, she sat in 25th place. And then she discovered that her shifter would no longer work and was forced to make the long initial climb in entirely too big a gear.

But she refused to panic, or give up, and willed things to get better. By the end of the first 4.8-km lap—and a brief pit stop for repairs—the 35-year-old. two-time world champion from Fredericton, N.B., had fought her way back to 15th position. By the end of lap two, she stood 12th. Then eighth, and then fourth, and with one lap to go, Pendrel had climbed all the way to third, just 30 seconds behind the leaders. Ultimately, she wasn’t able to close that gap, but she finally made it to the podium in her third Olympics, holding off a late charge from teammate Emily Batty of Brooklin, Ont., to win bronze by just two seconds. Jenny Rissveds of Sweden took the gold, and Maja Wloszczowka of Poland the silver.

The medal, Canada’s 22nd of the Rio Games, matches the country’s high-water mark for a non-boycott Olympics at Atlanta in 1996.

“The result was about giving our best, and that’s what I did. I knew I was strong,” said Pendrel, who turned in the fastest times on three of the race’s six laps. “You know, rarely does a race go perfectly according to plan. It’s just making the best of it and staying positive and always fighting.”

The medal brings a happy ending—she cried joyful tears as she stood on the podium—to what had been an unhappy Olympic story for Pendrel, one of the sport’s great riders. In Beijing, she finished fourth, just nine seconds off the podium. Then as a favourite for gold in London, four years ago, she disappointed, coming in ninth. 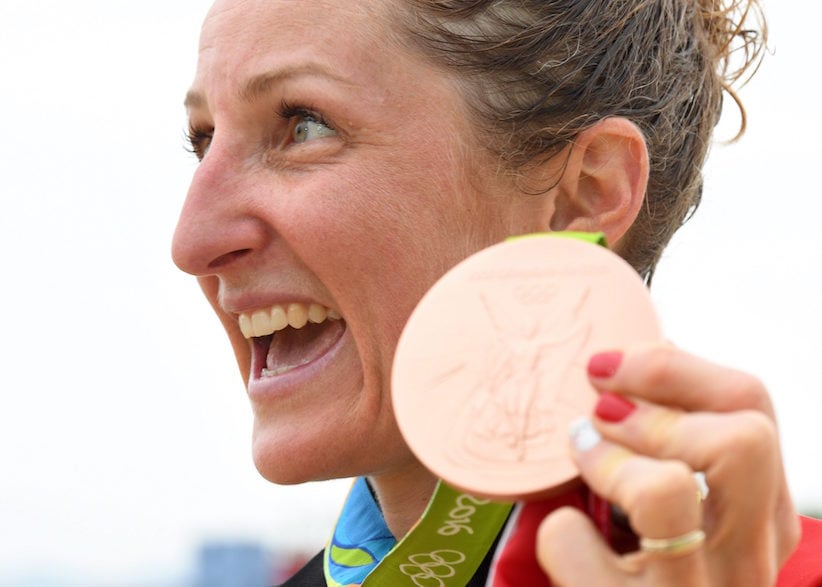 “It’s kind of unbelievable,” she said of the third-try bronze. “I thought before the race I still would be happy with my career if I didn’t have an Olympic medal, but I’m sure happy that I do. It’s a pretty special feeling. I worked so hard for this for so many with my coach and my teams and my husband. It’s amazing that it came together.”

But it nearly didn’t. Batty, 28, who won gold to Pendrel’s silver at the Pan Am Games last summer, nearly caught her teammate at the line. “I think fourth place is the worst place to come,” Batty said afterwards. “If I just had another 100 metres I would have for sure got it. I mean, I’m stoked for Catharine, but I came here for a medal for Canada.”

Batty lived her own nightmare in London, crashing in a training session just days before the competition and breaking her collarbone. She raced, but in extreme pain. “I’ve come a long way since London,” she said Saturday. “Literally, two bike lengths off a medal. I’m filled with mixed emotions. But I know everything I’ve done, and everything my coaches have done with me, has been spot on. It’s just a matter of time before I get that medal.”

Curt Harnett, Canada’s chef de mission in Rio, and himself a three-time cycling medalist, watched the race from the stands and came away impressed. “It’s an indication of a serious heart, a serious drive. Obviously Catharine rode outside of herself today,” he said. “Her comeback, her meticulous comeback, was just spectacular.”

Pendrel’s Olympic career is probably over, but her quest for a second overall World Cup title continues in two weeks, with the final race of the season in Andorra. “That’s what I’m going to do now. It’s nice to have that focus,” she said.

And surely, the comeback bronze.