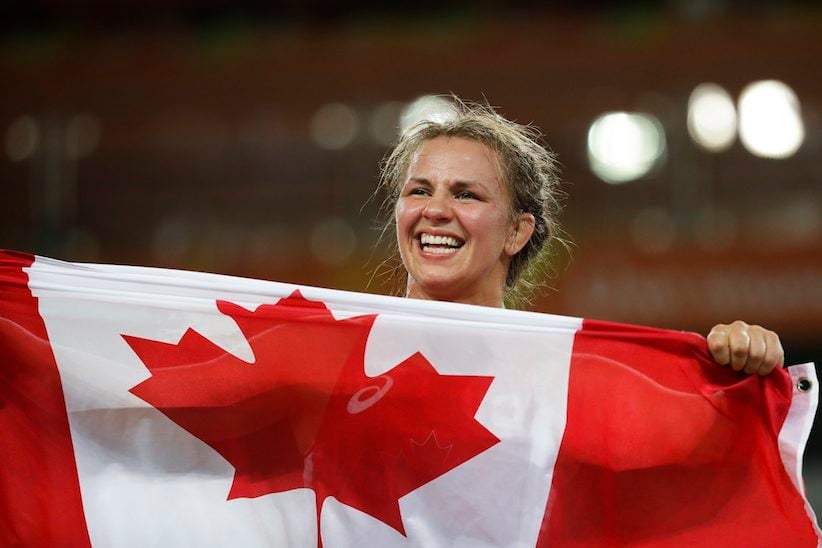 The Ottawa native was dominant in her match against Guzel Manyurova of Kazakhstan, winning 6-0, and bringing Canada its fourth gold in Rio.

Wiebe is Canada’s third-ever gold medallist in wrestling, following Daniel Igali at the 2000 Games in Sydney 2000 and Carol Huynh in Beijing in 2008.

Her win also keeps Canada’s streak in women’s wrestling alive, one that dates back to the 2004 Athens Olympics when the discipline made its debut. Canada won seven medals at the 1992 Bacelona Games.

Canadian diver Meaghan Benfeito capped off her Rio run in style after winning her second bronze and first individual medal.

The 27-year-old from Laval, Que., finished with an overall score of 389.20, behind Ren Qian and Si Yajie of China. She had contemplated retirement, but said she has decided to stick around.

“I’ve always said that if I became a double Olympic medallist, I would stop diving,” Benfeito said. “But I want to continue and my decision (to participate in the Tokyo 2020 Games) had already been made.”

Benfeito’s teammate Roseline Filion, 29, also from Laval, placed sixth with 367.95. The duo won bronze together in the 10-metre synchronized event, defending the medal they won at the 2012 London Games.

“All that I had hope for was to have five good dives,” Benfeito said. “I gave it everything and I couldn’t, by all evidence, ask for better.”

Wiebe and Benfeito were part of a possible rush of podium finishes for Canada on Thursday.

Damian Warner of London, Ont., slipped to third but remained on course to capture a medal in the decathlon. Through eight events, Warner was behind defending champion Ashton Eaton of the U.S. and France’s Kevin Mayer.

Star sprinter Andre De Grasse was also looking to add to his medal tally in Rio as he was slated to compete in the men’s 200-metre final.

Canada’s Brooke Henderson made her move in the second round of women’s golf at the Olympics.

The product of Smiths Falls, Ont., had five consecutive birdies to finish 7-under 64 and shot up the leaderboard into a tie with Britain’s Charley Hull for third in the event, closing in on South Korea’s Inbee Park and American Stacy Lewis. Hamilton’s Alena Sharp (69) is tied for 32nd at one under.

Tory Nyhaug from Coquitlam, B.C., made it safely through the wind and the wrecks at the BMX track to qualify for the semifinals of the men’s BMX.

In kayaking, Canadians Hugues Fournel and Ryan Cochrane were hoping for a better finish, but were proud just to have reached the Olympic final after learning less than three weeks ago they’d be going to Rio.

Fournel, of Quebec City, and Cochrane, of Halifax, finished eighth and last in the two-man 200-metre kayak final with a time on 33.76 seconds.

Fournel and Cochrane, who finished seventh at the 2012 Olympics in London, did not qualify for the Rio Games, but were informed on July 31 that a spot was open to replace a Russian pair who were suspended for doping.

On the track, Canadian distance runners were continuing their quest for a shot at the medal podium. Melissa Bishop of Eganville, Ont., qualified for the semifinal with the best time in the women’s 800-metre heats of one minute 58.38 seconds. Nathan Brannen of Cambridge, Ont., and Charles Philibert-Thiboutot of Quebec City will both race in the semifinals of the men’s 1,500.

In other preliminary events, the Canadian men’s and women’s 4×100-metre relay teams both qualified for their respective finals slated for Friday.

In men’s shot put, Tim Nedow of Brockville, Ont., finished 16th in qualifying and did not advance.