Oleksiak has won four medals in Rio, the powerhouse behind a Canadian swim team charged up to win

Penny Oleksiak saved her best for last. At the 50-m turn of the women’s 100-m freestyle race in Rio, Oleksiak was seventh, almost a full second behind the leader, Cate Campbell of Australia. Then the 16-year-old Torontonian simply turned on the jets, swimming the back half of the race a half-second faster than anyone else, making up all of that lost water and touching the wall in a dead-heat for gold.

“At the turn I kind of saw that I was pretty far behind. I knew that I turned basically after everyone,” she said later, a shiny gold medal hanging from her neck and a Canadian flag balled tightly in her hands. I’ve just been trying to develop my closing speed lately. In that race I just decided I had to put my head down and go as fast as I can.”

Oleksiak’s time of 52.70 is a new Olympic record, shared with fellow champion Simone Manuel of the United States. Sarah Sjostrom of Sweden received the third medal, a bronze. 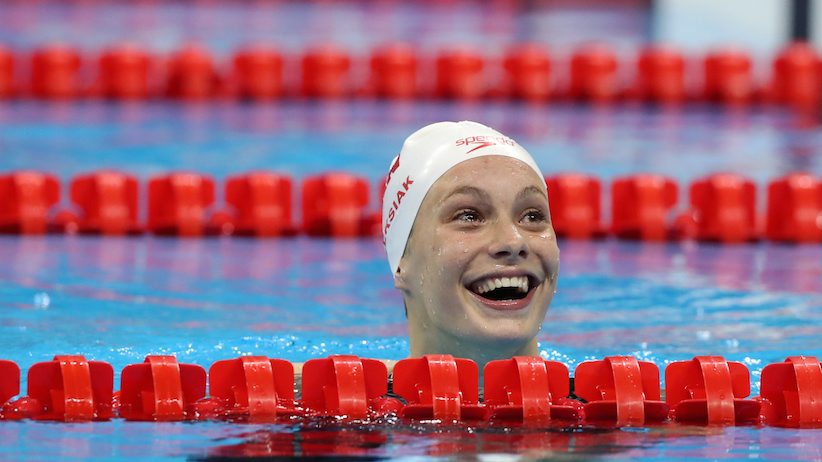 And while they played the U.S. anthem first, and raised the Stars and Stripes above the red Maple Leaf during the victory ceremony, there was no question as to which nation was happier and more relieved. Oleksiak’s gold is her fourth medal in just six days of swimming at Rio, adding to a haul that already included an individual silver and two relay bronzes. But more important, it marks a whole bunch of firsts: Canada’s first gold of the 2016 Summer Games, the country’s first top finish in the pool since Barcelona 1992, and the first gold-medal swim by a Canadian woman since Los Angeles, 32 years ago.

“I think everyone dreams about becoming an Olympic champion. It’s definitely something I thought of, but not super seriously,” the shell-shocked 16-year-old explained at a post-race press conference. “It’s always just been a dream.”

Her fourth podium finish also officially makes Oleksiak Canada’s best-ever performer at a Summer Games. Anne Ottenbrite won three medals in Los Angeles: a gold, silver and bronze. Elaine Tanner did the same in Mexico City in 1968 with two silvers and a bronze. And the late Victor Davis had three medals in L.A.—a gold and two silver—and added another silver four years later in Seoul. The most medals ever won by a Canadian at a single Games is five—Cindy Klassen’s gold, two silver and two bronze in speed skating at Turin 2006. She also won a bronze in Salt Lake City.

After the medal ceremony, held at midnight local time in a rapidly emptying stadium, Oleksiak wandered into the crowd to exchange hugs and tears with her father Richard, mother Alison, sister Hayley, and big brother Jamie, an NHL defenceman for the Dallas Stars. He paid for the family to come to Rio after his sister unexpectedly made the Olympic team with a series of upset wins at the Canadian trials in April. They had all watched the race from the second-last row, “U,” and held their breath with the rest of the crowd as Penny stretched for the wall.

“Leave it to Penny to make it a roller coaster, you know what I mean,” Jamie said later. “She likes keeping you on your toes. I think that reflects in her swimming. It just speaks to her character and competitiveness.”

Sister Hayley, a rower at Boston’s Northeastern University, was still choking back the tears. “My brother and I changed her first diaper. So it’s a little bit emotional,” she said. “She gave us a heart attack. She always seems to do that to us. She gave us a heart attack in the first 50. You just have to have trust in her that she’s going to power down that last 50 and take it.” 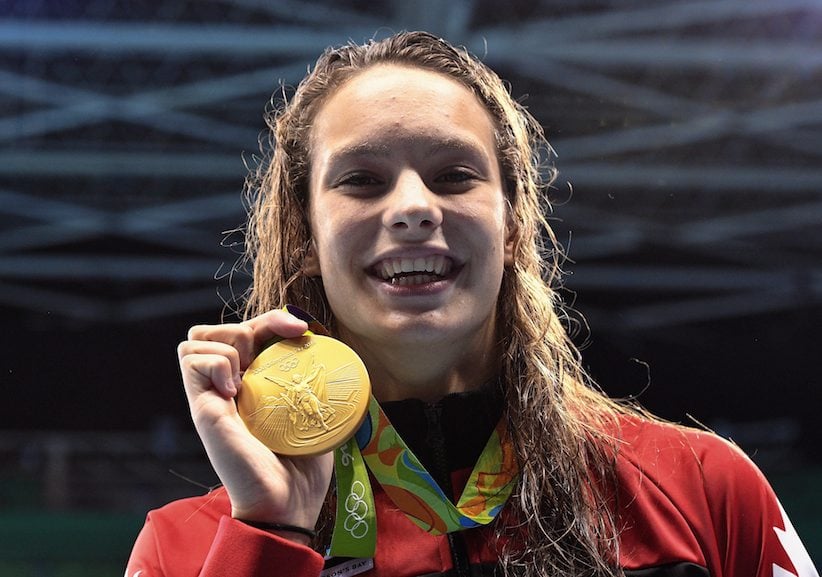 Canada’s Penny Oleksiak holds up her gold medal after her first-place finish in the women’s 100m freestyle finals during the 2016 Olympic Summer Games in Rio de Janeiro, Brazil, on Friday, Aug. 12, 2016. THE CANADIAN PRESS/Sean Kilpatrick

If Oleksiak’s sudden dominance on the world stage is a surprise to her family, it’s even more of a shock to her coaches and competitors. “It might sound strange to people back home who say, ‘Oh, she’s Canada’s best swimmer.’ Well, that’s happened in the last three months,” says Ben Titley, head coach for the Olympic team and Swimming Canada’s High Performance Centre in Toronto. “The nine months prior to that, she was the one chasing Chantal [Van Landeghem], chasing a Sandrine [Mainville], chasing an Audrey Lacroix. Getting tricked into what is ‘normal.’ ” The idea was to make the teenager tap into her competitive instincts and push her limits through a daily dose of humility. “For her, pushing certain times in training and getting beat was normal,” says Titley.

The original plan was to have Oleksiak come to Rio and get used to the big stage, bright lights and media attention. Next year was to be about becoming competitive. Winning medals was supposed to start happening in 2018, two years out from the Tokyo Olympics. “What’s happened is, with her extremely long legs, she’s leaped a couple of steps,” Titley says wryly.

John Atkinson, high performance director for Swimming Canada, says this Olympic squad has already surpassed his expectations. He’d been forecasting somewhere between zero and four medals—last night makes five—and double the seven finals the 2012 team made in London. And there is a belief that there is still at last one more medal to come from the pool—Ryan Cochrane in the men’s 1500-m free on Saturday. And perhaps one more for Penny and her teammates in the women’s 4 x 100-m medley relay that same night.

Since taking over the Canadian program in March 2013, Atkinson has been preaching three things: improvement of times, progression through heats to finals, and finally, conversion to the podium. All have been on abundant display in Rio, with multiple personal bests and Canadian records to go along with the medals. He points to the example of the women’s 4 x 200-m freestyle relay team. A year ago at the FINA world championships in Russia, they finished 11th, with a time of 7:57. On Wednesday, they timed 7:45 and won bronze. “They actually improved by 11.92 seconds in a year,” he says proudly.

But no one is disputing that it is Oleksiak who is driving the bus. She has come into her first real senior international competition and not only established that she belongs, but that she counts among the very best in the world. “There’s no fear. She just gets in and races,” says Atkinson. “A racer is someone you always want on your side at the Olympic Games.”

Titley says Oleksiak has taken on the mantle of team leader and seems entirely at ease with the burden, pushing her teammates to loftier heights with each swim. It’s was Oleksiak’s eye-popping semifinal in the 100 free—finishing just 0.01 seconds behind Australia’s Cate Campbell, the world record holder—that set up the relay medal, he says. “We got back to the pit and the other girls were wide-eyed and like, ‘Holy s–t, we’re going to do something amazing here!’ They all lifted because of what that one person did.”

MORE: The Young and the Fast: Canada wins relay bronze in Rio

In the past it has been Cochrane, winner of a bronze in Beijing and a silver in London, who has filled that role on the team—a difficulty since his race comes on the final day of the meet. “I’m a big believer in momentum. It’s hard to stop once it gets going,” says Titley. “Having a strong first day or two really sets up the team.”

Thursday night provided another example, with Hilary Caldwell of White Rock, B.C., cruising into Friday’s 200-m backstroke final with a convincing victory in her semi—and the second-fastest time overall—behind Hungarian powerhouse Katinka Hosszu, the winner of three golds in the Rio pool already.

“It’s made me that much more antsy, seeing all these girls swimming so well. I want my part in it,” said the 25-year-old Caldwell. “We’ve had all these Canadian girls on the podium, so if they can do it, I can do it.”

Oleksiak herself seems a little bewildered, or even frightened by all the fuss. Over four trips to the Olympic podium she has hardly smiled.

“I’m only 16,” she explained Thursday night. “Yeah, it’s pretty insane to win a gold medal at your first Olympics.”