By Beth Harris and Paul Newberry, The Associated Press August 12, 2016 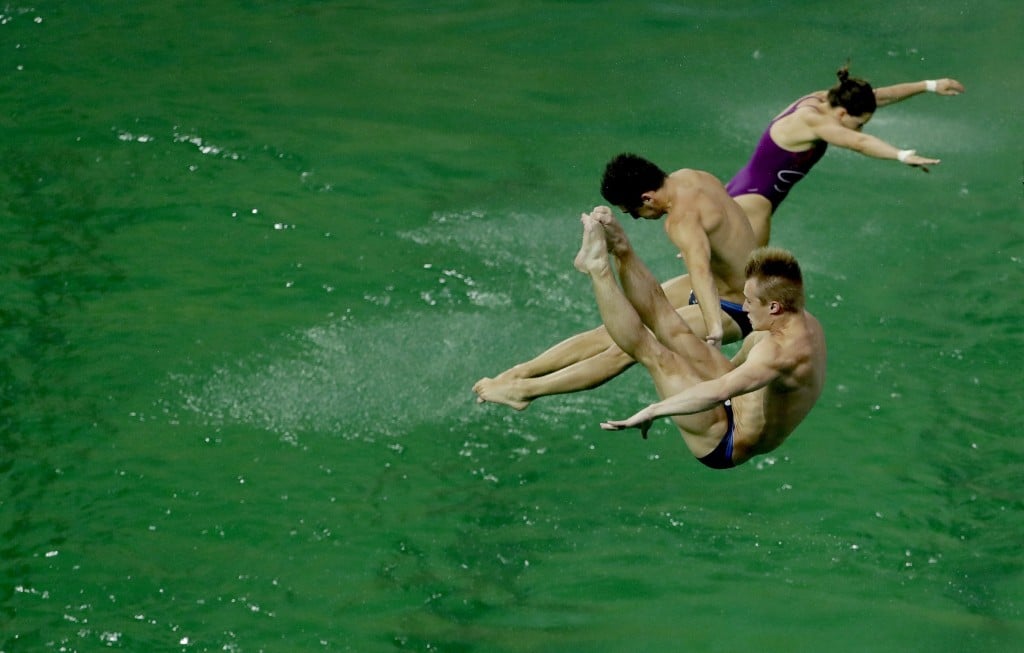 RIO DE JANEIRO – The pool at the Maria Lenk Aquatics Center was closed for diving practice Friday to allow more time to clean the green-tinged water.

The water suddenly changed colour Tuesday, midway through the synchronized diving events. Officials insisted the water was safe for diving, even after an adjacent pool used for water polo and synchronized swimming also turned a lighter shade of green.

The diving well was shut down when athletes arrived for morning warmups, though it did finally open at 1 p.m. local time – just 2 1/2 hours before the start of the women’s 3-meter individual event.

American diver Abby Johnston, who is competing on the springboard, said she showed up for her warmup, only to learn the pool was shut down without any notice. She wrote on Twitter that “#FixTheSwamp” should start trending.

British diver Tom Daley, who won bronze in the synchro platform event, also commented on the state of the pool in a Twitter post.

“Hopefully that means we haven’t been diving in anything too bad the last couple of days!” Daley said.

Diving pool is closed this morning. Hopefully that means we haven't been diving in anything too bad the last couple of days!

Mario Andrada, chief spokesman for the Rio 2016 organizing committee, stressed that the pool was safe for competition, clearing the way for the afternoon competition. He conceded that some athletes were bothered by the water, but said that was a result of efforts to get the water clean.

“We reiterate what we have been saying all along – the water does not offer any threat to the health of the athletes,” he said. “In the first day of this water situation, one or two athletes complained about their eyes being itchy. This was a result that the first reaction when we saw the water turning green was to use one of the chemicals – chlorine – that is very common in swimming pools. We reduced immediately the quantity. We retested the water and it was totally within the parameters.”

Related: How to turn a green pool into a blue pool

Simon Langford, chief spokesman for the Maria Lenk, said the pool was closed to allow additional cleaning. He said the decision was supported by world governing body FINA.

“The reason is that the water must be still so the pool can return to its blue colour as soon as possible,” Langford said in a statement.

However, when the pool finally opened for practice, it still appeared to be the same shade of green.

Andrada said officials were caught off guard by the pool’s deteriorating condition.

“Chemistry is not an exact science,” he said. “Some things, as you can see, went longer than expected.”

Rain the past couple of days made it even tougher to clean the pool.

“The rain doesn’t help,” Andrada said. He added that athletes had access to dry-land training in the morning, but conceded that “was not ideal.”

He explained that the changing colour of the pool was the result of increased alkaline levels, much like an aquarium can turn green when not monitored properly.

“When we went to fix the green, there was a discussion about the best chemicals. We can’t use too much chemicals in the water because athletes are training in it,” Andrada said. “We certainly could have done better in the beginning to prevent the water from turning green. Once it turned green, we again made another bit of a mistake.”