How Calgary outgrew the Olympic dream

Jason Markusoff: The 2026 Winter Games were seen as a quick fix for Calgary's economic challenges. With a clear 'no' vote, residents showed they have more lasting solutions in mind 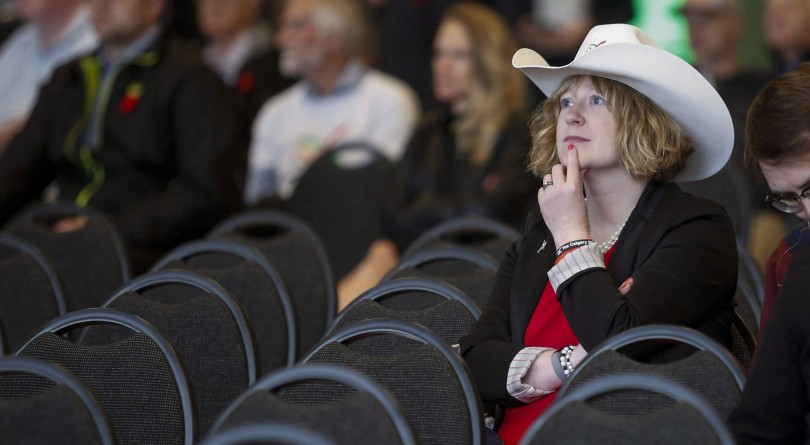 An Olympic bid supporter listens to speeches during a rally in Calgary on Nov. 5 (THE CANADIAN PRESS/Jeff McIntosh)

Calgary is a city of yes, the Olympic backers told themselves and residents. Can-do energy, entrepreneurial spirit. Doesn’t matter if the Olympics are a quadrennial swamp of corruption and budget overruns; we can do it better because we’re Calgary, or so went the mantra of ex-Olympians, business leaders and the mayor. The city had enthusiastically said yes before, and just in case anyone forgot the glory days, local hoteliers paid for the nightly relighting of the 1988 Olympic cauldron and the giant flame atop Calgary Tower during the countdown to the Olympic plebiscite.

How could the ragtag No camp compete with that? By holding nightly bonfires at the stairs behind City Hall, setting ablaze economic development studies and ’88 SunIce volunteer jackets?

Doing nothing, it turns out, was an ample response. Calgarians voted Tuesday against hosting the 2026 Winter Games, reducing the last few days of public flames to a damning symbol: spending money to burn fuel for the sake of nostalgia and the optimistic hope it sparks a better tomorrow.

The decision was clear, if not overwhelming: some 56.4 per cent of voters opposed pursuing the bid while 43.6 per cent were in favour, according to the city’s unofficial count. Turnout was relatively strong for a municipal vote, with 304,774 ballots cast, representing just under 40 per cent of eligible voters—more than some observers expected.

While the referendum decision is technically non-binding on city council, the Alberta government said it would fully yank its $700-million contribution if voters didn’t want the Games. Filling that hole would require a deeply indebted city to triple its current ante, something almost no civic booster would now encourage—especially not city councillors, a majority of whom were already against the bid. Mayor Naheed Nenshi, who called the 2026 plan “an outstanding deal” for Calgary, said Tuesday night he’ll accept the voters’ clear wishes and vote at council to terminate the bid. “I ultimately take my direction from citizens,” he said.

Does this make Calgary a No city? There were certainly healthy amounts of defeatism within the anti-Olympics vote—a dread of tax dollars going toward anything beyond stuffing potholes and plowing snow, a disdain for business elites and sunny Mayor Naheed Nenshi assuring the masses what great a deal this would be for the city. A conservative get-off-my-lawn mood is prevailing in Calgary, one born of lingering unemployment woes and disillusion with the NDP governing Alberta and the Liberals leading Canada. Sometimes, the hosting debate felt like the Yes side versus the BAHHHHH side.

But with the cynicism was a healthy dose of circumspection. Two weeks before the plebiscite, Calgarians almost universally celebrated a $245-million new central library, funded primarily through property taxes—the perfect rebuttal to the Games boosters now grumbling “this is why we can’t have nice things.” Beautiful, functional and lasting nice things, Calgary residents can say yes to. But there’s reason to not see equivalent merit in expensing $2.9 billion of public funds for a month-long event in the middle of next decade that would have left Calgary with some new affordable housing couple new sports venues and refurbished 1988 facilities, not all of which the region needed to re-Olympify.

In keeping with the Olympic movement’s new recycling ethos, and tightening government pursestrings at all levels, the city left other civic ambitions like a new pro hockey arena or a train to the airport off its bid plan. They’re the sorts of projects that gave Vancouver more than a party to remember its Winter Games by. Bid advocates in Calgary may now wonder when they’ll find money for eventual life-cycle renovations spruce up the speed-skating oval and bobsled track—though governments have injected some funding injections in recent years. Instead those wish-list items will land where they should always be, in the normal tussle with other priorities like public aquatic centres, new suburban schools and repairs to the downtown arts centre, which, through two years of the Olympic debate, has been encased in scaffolding to guard against falling stonework.

RELATED: Putting the ‘limp’ in Olympics: Calgary’s 2026 bid lives on, but for what, exactly?

There was ample cause for skepticism elsewhere. Calgarians didn’t buy Nenshi’s claims that billions of dollars from the Alberta and federal governments amounted to a tax rebate—not when more than one-third of tax funds in Alberta’s coffers come from the province’s biggest city. A long history of ballooning security costs for big events made it hard to believe the RCMP and other agencies would stick to a budget greatly reduced from initial projections. And the International Olympic Committee’s reputation for corruption and expectation of white-glove treatment has deepened cities’ reluctance to deal with the aristocrats of global amateur sport. They’ve made recent efforts to reform, but the budget woes of Tokyo 2020 suggests how hard some beasts are to tame.

Through this process, Calgarians experienced first-hand how grating it is to sit through a massive, fact-bending economic development pitch about one’s own community—the claims that, for every one dollar invested, a fistful will come back (in some indirect form or another!); the grandiose arm-waving and overly liberal use of the word “catalyst.” The head of BidCo, Mary Moran, was seconded from her job as head of Calgary Economic Development, where she was last seen promoting a flashy longshot bid for Amazon’s second headquarters. Accustomed to lavishly extolling Calgary to outsiders, she was forced during the plebiscite to pitch to the hometown crowd.

Moran told one forum last week that 90,000 people moved to Calgary in the couple of years straddling the 1988 Games, and she suggested Canadian Airlines and Imperial Oil headquarters landed in Calgary amid the afterglow of the Olympic global spotlight. But her fervid spin wilts under scrutiny. From 1987 to 1990 the city’s population grew by half the amount Moran cited (people move in, people move out, perhaps); Canadian Airlines was formed in 1987 when an airline already based in Calgary swallowed up smaller rivals; Imperial Oil arrived 17 years after the Saddledome’s Battle of the Brians, and ages after it made any sense for a major oil firm’s head office to remain in Toronto. When corporations scout new office locations, they look past such hokum and base their picks on credible and compelling reasons. A city’s residents, when being courted with such gauzy ideals and promises, can simply shrug them off—or vote to spite them.

RELATED: Do the Olympics still matter?

Yet after this failed and divisive exercise, Calgary still needs Moran and her ilk to do their rose-tinted best. Unemployment in the city sits above eight per cent. One-quarter of downtown office space sits vacant—far more than anywhere else in Canada. That’s a problem likely too big for a pipeline, a bounce-back in oil prices or a conservative premier to remedy. Civic leaders have concluded the city needs to pivot to other sectors for long-term vitality, and many positioned another Olympics as an easy (here’s that word again) catalyst. “In this city, we are allergic to small dreams,” the mayor said after the voters’ rejection. Nenshi and others conceded that Calgary 2026 wouldn’t be a silver bullet. Good. Now let’s see what else is in their arsenal for this battle of paramount urgency.