Five questions and answers about the world’s high jump king

As soon as Derek Drouin claimed his first Olympic gold medal in the high jump this evening, clearing the 2.38-m mark that none of his competitors could match, Canadians no doubt had questions about what they had just witnessed. Here are five questions and answers on Drouin’s golden technique.

Why does Derek Drouin run at the bar so slowly?

Most high jumpers sprint to the bar as they gain speed for they leap. But not Drouin. Instead, he controls his tempo in order to keep his right plant leg as stiff as possible. Bending his legs, only to straighten them again for takeoff, would waste valuable energy that could be used to help propel him upward. If anything, Drouin might be high jump’s next big innovator.

“He’s actually very inflexible, which is inherent to him jumping the way he does,” Drouin’s coach explained to the New York Times for an interactive on Drouin’s jumping technique.

MORE: Derek Drouin rides confidence to Rio gold: ‘I wasn’t nervous at all’

Watch Drouin’s form and notice that his left arm is already pointing almost straight up before his right leg even hits the ground to jump. “That’s against any formula you’re going to see,” he told Sportsnet Magazine. But it works, clearly. Drouin swings both arms in his run-up, but the extension of that left arm is there to help guide the rest of his body over the bar.

Everybody uses white tape to mark their run-up on the track, but Drouin’s tape is lime green. What’s up with that?

Drouin has used the lime green coloured tape since grade nine. “People from some tape factory came to our school to talk, it was super weird, and they gave us rolls of tape, and I was like, ‘Oh perfect, I’ll use this,'” Drouin told The Canadian Press earlier this year. “Green is my favourite colour, and everybody else uses white, so it’s nice to know exactly what mark is yours.” 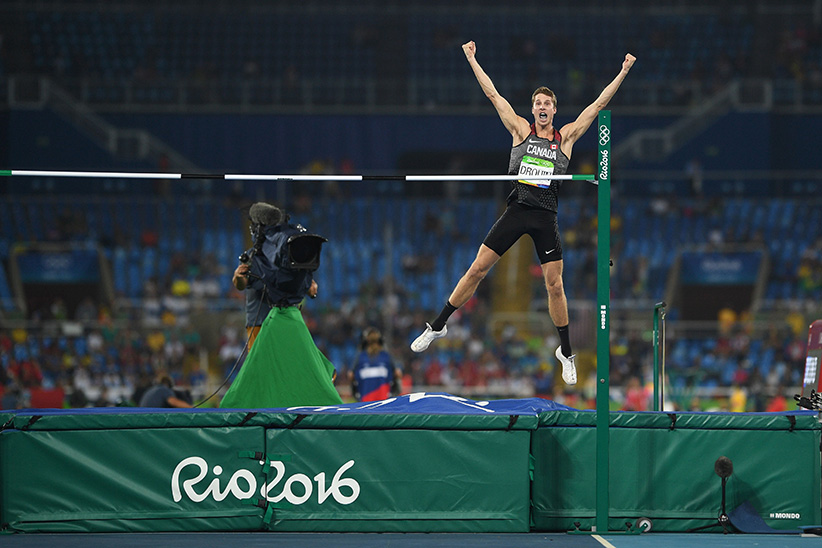 Most high jumpers approach the bar from the right-hand side. He comes from the left. Any particular reason why?

“That’s the way I had to come through the hallway in my basement when I was little,” Drouin told Sportsnet Magazine. More specifically, as a kid Drouin created a homemade high jump setup in his parents’ basement. A broomstick lay across a pair of speakers. Stacks of books increased the height of the bar. Couch cushions on the other side served as a landing pad. The configuration of the rooms in the basement, meanwhile, required that Drouin run down the hallway and jump over the bar/broomstick from the left side.

Can Drouin beat the world record?

Cuba’s Javier Sotomayor has been the high jump world record holder since 1988, when he leaped 2.43 metres—a full five centimetres above Drouin’s gold medal jump in Rio. Unfortunately for the Canadian, Sotomayor broke his own record—twice—maxing out at 2.45 metres, a world record that has stood since 1993.

Here’s how Drouin’s progression looks as he chases the world record. 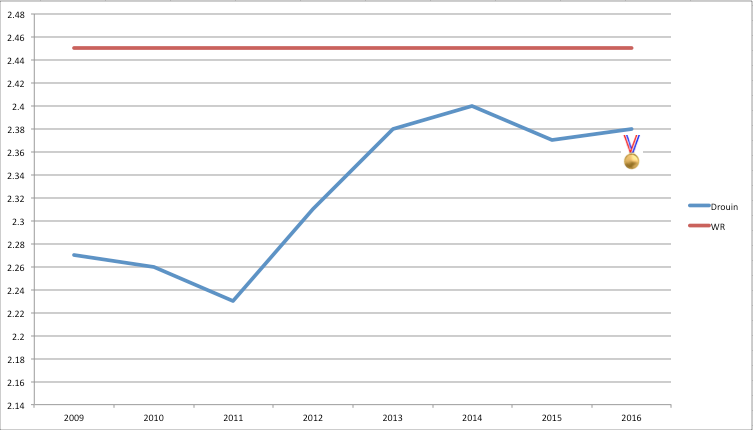 All that to say, Drouin still has leaps and bounds to improve if he’s going to take down one of track and field’s longest standing records.

In the meantime, marvel at Sotomayor’s greatness: