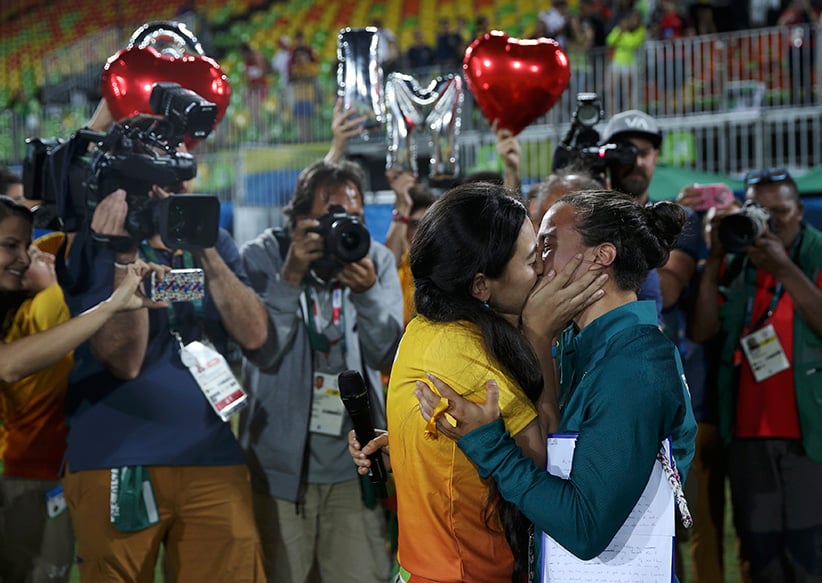 The planning and construction stages of nearly every modern Olympic Games have been touch-and-go: the sheer scale of the Games requires such massive changes to infrastructure and transit that even with several years’ lead time, actually getting everything done to Olympic standards often comes down to the wire. Rio has been no different, and weathered its share of potential scandals—from the possibility of a Zika outbreak to the protests roiling the country—as the Opening Ceremony neared. But now that the Rio Games are finally under way, amid all the stunning achievement and withering heartbreak, LGBT competitors are setting records, breaking barriers and forcing progress on the world’s greatest athletic stage.

Before the Games even began, news came out that this year’s competition would feature a record-breaking number of out LGBT athletes: by SB Nation’s count, 46 compared to the 23 out athletes who competed in London in 2012. It’s an achievement made all the more notable after the last Winter Olympics, held in the Russian city of Sochi, shone a spotlight on that country’s ongoing discrimination against and abuse of LGBT people.

But in Brazil, the historic number of LGBT competitors was just the beginning. Last Friday, model Lea T became the first openly trans woman to participate in the Opening Ceremony as she peddled a bike with a placard introducing the Brazilian team.

In another first, the British women’s field hockey team includes the first married gay couple to simultaneously compete. Kate and Helen Richardson-Walsh were also on England’s 2012 team—which won bronze—though they hadn’t yet wed four years ago. And, in even more marriage news, Rio has now played host to the first gay Olympic marriage proposal. After the Brazilian women’s rugby team lost to New Zealand on Monday, team member Isadora Cerullo’s girlfriend ran onto the pitch to pop the question. (Cerullo said yes.)

All of this positive news stands in stark contrast to the treatment of LGBT people in Brazil outside the Olympic glow: it’s been called the deadliest place in the world for that community by no less reputable a source than the New York Times, and especially so for trans people. An LGBT person dies nearly once a day in Brazil. And troubling reminders of anti-LGBT sentiment have flickered inside the Olympic bubble; for evidence, look no further than the homophobic epithets that have been chanted at women’s soccer teams from the U.S., Canada and Australia as they’ve taken the field.

Still, the record number of openly gay, lesbian, bi and intersex athletes competing — two trans athletes who are not out are also among the athletes — and the warm reception representatives like Lea T have received point unmistakably to at least some degree of progress.