American commentators mostly let Rio's closing ceremony speak for itself. After all, there's not much for them to say about a show about everyone else. 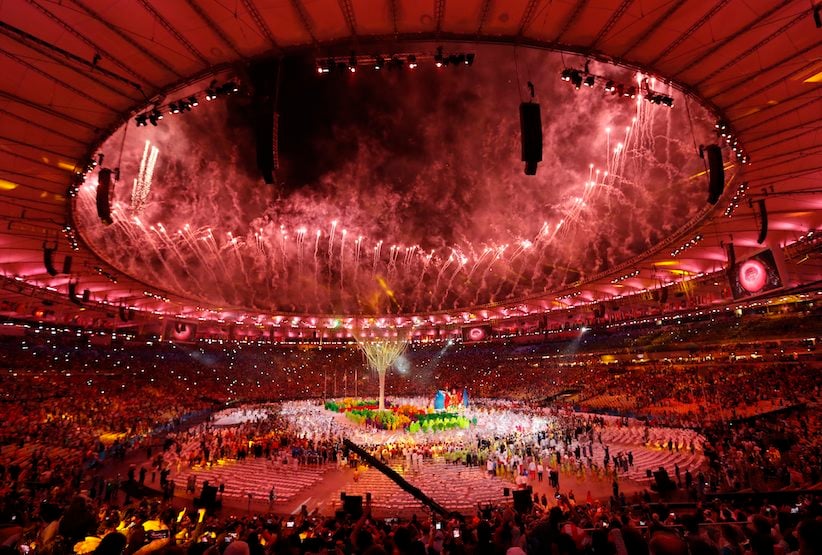 I hadn’t watched much of NBC’s Olympics coverage, so when it came to the end of the fun, I thought I would look at the network that still shapes the way many of us watch the Olympics in North America.

The coverage began with Bob Costas and Al Michaels, two veteran sportscasters who have been with NBC approximately since the Flood, talking about how many Olympics they’ve covered on NBC, and reminiscing about other Olympics besides this one. And Michaels referred to the Russians as “The Soviets” before correcting himself. The point is just that where other networks are very concerned about the need for new approaches and new personalities, NBC doesn’t care if we know that the broadcasters have been around forever. It’s a network where a lot of the powerful players have been around seemingly forever, and whose sports coverage in particular depends on familiar faces and voices. Plus sports is the most popular part of modern TV broadcasting, the part that is least in need of a shake-up. So watching the Olympics on NBC is a bit of a time-warp experience, where not much seems to have changed since the 1980s.

This meant, for the first hour before Rio’s closing ceremony started, a bunch of flashbacks to the great moments of the Games so far, followed by commentary from Costas and Michaels, our two suit-and-tie-wearing guides to everything. It also meant, of course, an emphasis on American athletes. Costas talked about which athletes were most important “from a U.S. perspective” and reassured viewers that they would be getting Michael Phelps coverage later in the hour. Costas was not entirely focused on one country: some non-American athletes are so famous that they absolutely have to be talked about, particularly Usain Bolt. (Though Michaels made sure to compare the legendary Jamaican sprinter to great American athletes like Michael Jordan and Muhammad Ali, because world-historical greatness must be discussed in an American context.) But they don’t really hide that they want to be talking about Americans as much as possible.

The U.S.-centric nature of NBC’s coverage has been a familiar complaint, even among some Americans, for quite a long time. But apart from being good for ratings, it’s part of NBC tradition, and NBC is a self-mythologizing network that takes its traditions very seriously. It’s not going to change anything it doesn’t absolutely have to.

This approach does make it harder for the network to cover the ceremony, which is largely about the host country and therefore doesn’t feature much American content. NBC’s team of commentators only really seemed to come to life when they could mention something with which their audience would be familiar, like the controversy over whether the airplane is an American or a Brazilian invention. The start of the ceremony featured another invocation of Alberto Santos Dumont, the aviation pioneer, and the NBC team was on it: “They just can’t let this go!” one of them said. They also enjoyed the brief tribute to Carmen Miranda movies, which, as they mentioned, were the gateway by which some of the U.S. became aware of South America. And if an American showed up on the stage, like the up-and-coming Iowan Julia Michaels, they’d mention it.

But otherwise, there’s not much NBC could say, because commenting too extensively would require commentators to explain too much to the American home viewer. Whether it’s the rules of a game or the history of a country, sports announcers try to provide no more information than we absolutely need. During the parade of countries, they would tell us as much about the country’s performance (“Canada had a strong showing”) as they thought we needed to know. And in the interpretive dance segments, they would let us know who we were seeing and what it was supposed to represent, but mostly step back and let the moment speak for itself if they couldn’t relate it to something easy to understand.

The difficulty with this way of doing things is that it makes anything without some kind of American interest seem slow going; a more internationalist approach might work or it might not, but it could theoretically pump up the moments when the U.S. isn’t involved. But, again, it’s NBC. The network isn’t going to change what has worked for it, and in an era when the TV industry seems to be changing even more rapidly than usual, there’s something comforting about the eternal old-fashionedness of the NBC approach. So now it’s on to Tokyo 2020, where, if Prime Minister Shinzo Abe’s appearance was anything to go by, NBC may spend a lot of time forgetting that Super Mario isn’t American.