Biyarslanov, nicknamed 'the Chechen Wolf,' is the only male representing Canada at the Olympics this year 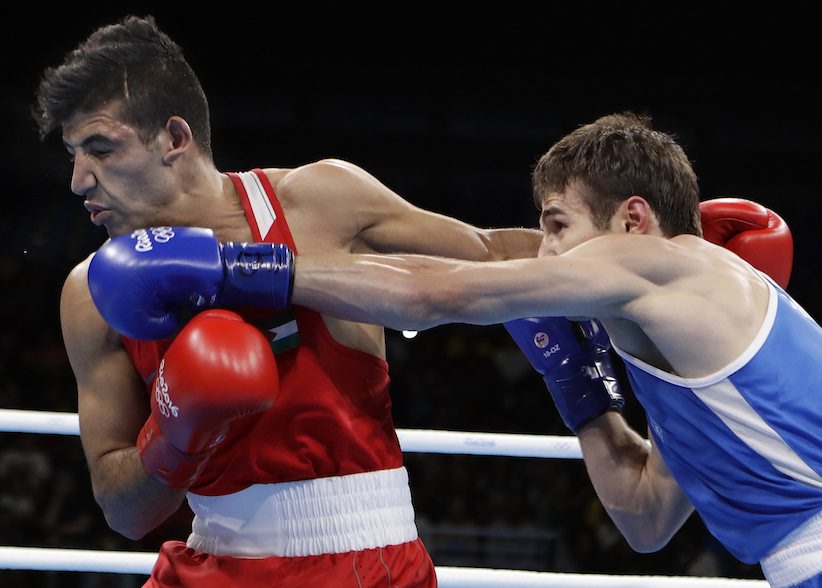 Arthur Biyarslanov is certainly not a household name among Canadians, but the boxer undoubtedly has one of the more fascinating stories of any Olympic athlete to compete for this country.

The 21-year-old’s chase for a gold medal in Rio got off to a strong start on Thursday, defeating Obada Alkasbeh of Jordan 3-0 in his opening match in the men’s 64-kilogram light-welterweight division.

Here’s what you need to know about Biyarslanov.

The Chechen Wolf had quite a journey to Canada

Biyarslanov was four years old when his family bolted from war-torn Chechyna for neighbouring Azerbaijan. “I do remember crossing the border and our soldiers were helping us,” Biyarslanov told the Toronto Star in April 2015. “The soldiers were carrying me and running with me, taking us to a safe place. I was hearing bombs, shots. They asked me my name and I told them my name is Nohcho Borz, it means Chechen Wolf. You’re supposed to be scared of the wolf but my father told me you’re supposed to be like a wolf. So I was Nohcho Borz.”

In 2005, Biyarslanov’s family left Azerbaijan for Toronto. He knew very little English outside of soccer terms.

By then, Biyarslanov’s father had died (when the boxer was seven years old), and his mother brought four children to Canada by herself.

Still, he said, “Canada is kind of like heaven. I came from being all the way down to a place to where the door opened to so many opportunities. I’m just thankful for being here. I understand the freedom that is Canada.”

Canada is special to Biyarslanov not only because of the way it welcomes different cultures but also because it is where he took up boxing for the first time at age 12.

He began the sport in 2007 when his brother recommended it as a method of self-defence. Now you can’t go a day without finding him at Toronto’s Atlas Boxing Club near Yorkdale Mall.

“He’s the one who made me what I am. He forced me and to be honest I hated it,” he told Metro News. “I couldn’t punch properly, couldn’t move right and I hate being bad at something, when everyone is better than me… Eventually, I had my first fight and the joy of winning a fight, that feeling, was what changed me.”

Biyarslanov has been emerging in his sport for quite a while.

He is Canada’s only male boxer at the Rio Olympics and has a legitimate shot at a medal after taking home gold at the Pan Am Games last summer with impressive victories over Argentinian Lucas Gimenez and Luis Arcon of Venezuela before upsetting Yasniel Toledo from Cuba. It was Canada’s first gold medal in the event since Chris Clarke in 1975.

“I want to win a gold medal for Canada in the Olympics. It’s been 28 years since we won a gold. That’s what I did in the Pan Ams after 40 years, brought gold back to Canada.”

Biyarslanov is a three-time Canadian champion and began training with Adrian Teodorescu in 2013, who coached Lennox Lewis to an Olympic gold medal in Seoul 1988.

He used Pokemon cards to harden his hands

Biyarslanov says that he always had hard hands, dating back to when he was a kid, and one of his strategies was quite unique.

While playing with Pokemon cards he would frequently slap his hands on the floor, which helped increase his strength.

“When I was young, there wasn’t much to do,” he told Metro News. “There was no phones, we had to use what we had around. At that time Pokemon was really big. It was a different kind of game though, there were cards that you had to slap down and flip them over. I was really good at it.”

A simple glance at Biyarslanov’s Twitter page says everything you need to know about his character.

The top tweet pinned to his account is a written note to himself from November 2013, promising himself that he will win an Olympic championship in 2016.

Almost 3 years ago i wrote this on a piece of paper. Now i look at it every time i use my phone #Rio2016 #Teamcanada pic.twitter.com/q1afPUeF21

As you can tell from the picture above, he keeps the message on the screen of his phone and incredibly that dream is still alive.