Person of Interest: CIS Athlete of the Year—and bronze medallist

It's been a big year for backstroker Kylie Masse, who won the bronze in the 100-metre event—Canada's third medal in the pool at the 2016 Rio Olympic Games 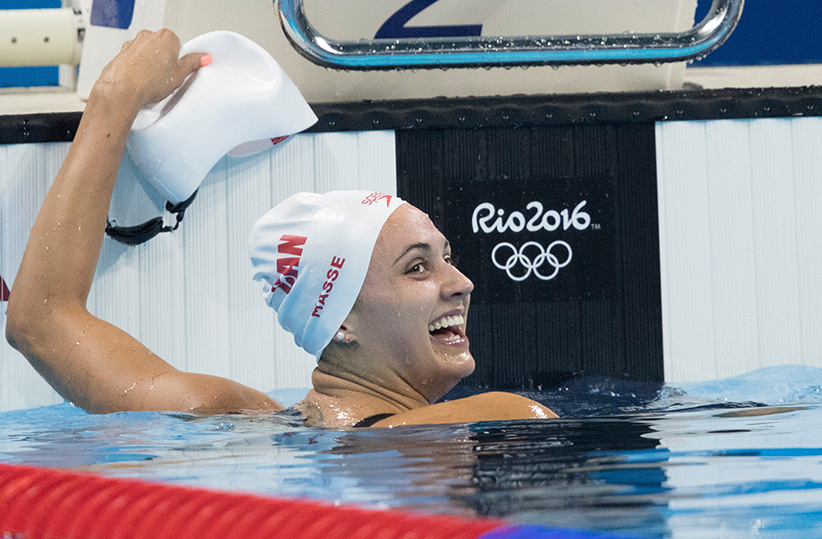 Canada’s fourth medal of these Olympic Games—and the third by the swim team—comes thanks to Kylie Masse. She’s from Windsor, Ont., she’s a student at the University of Toronto, and she loves cheesecake. What else? Read on for the 411 on the newly decorated Olympian.

Masse is a backstroke specialist, and the 100-metre is her best distance. She qualified for her first Olympics by breaking the Canadian record in the event at Canada’s Olympic swimming trials earlier this year. And she actually broke the record twice—once in prelims, and again in the final.

Gamer on the big stage

On Monday in the Olympic final, Masse once again bettered her Canadian record, clocking 58.76 seconds to tie for bronze. She wasn’t exactly seen as a medal threat after the preliminary rounds: The Canadian qualified third in her heat and fourth in her semifinal.

Masse told CBC she was inspired by teammates who’d won medals during the previous two days (Penny Oleksiak won silver and the women’s 4×100-metre freestyle relay team took bronze). “We kind of get energy from each other, so it’s super exciting,” Masse said.

It is super exciting. Consider this: Canada had gone 20 years without winning a women’s swimming medal at the Olympics, and through three days in Rio the women have won three. The last Canadian woman to win an Olympic backstroke medal was Nancy Garapick, at the Montreal Olympics in 1976.

Masse, who takes kinesiology at U of T, was CIS Athlete of the Year and won her second straight Ontario University Athletics Swimmer of the Year award in 2016. She won gold in all her individual races at the OUA championships (50m, 100m and 200m backstroke, and 100m butterfly). At the Canadian Interuniversity Sport Championships earlier this year, she won all the backstroke events and set the Canadian record in the 50m. She also led U of T’s women’s team to its 15th national title.

Masse is a strong candidate to swim for Canada in the 400-metre IM, the final of which goes Sat., Aug. 13. You also have to figure she’s only going to continue to improve. Masse started swimming competitively at age 10, and she’s progressed massively since then. Two years ago, she was ranked No. 200 in the world. Now, she’s an Olympic bronze medallist.