Persons of interest: Benfeito and Filion repeat as medallists

The synchronized divers defended their 2012 medals with aplomb 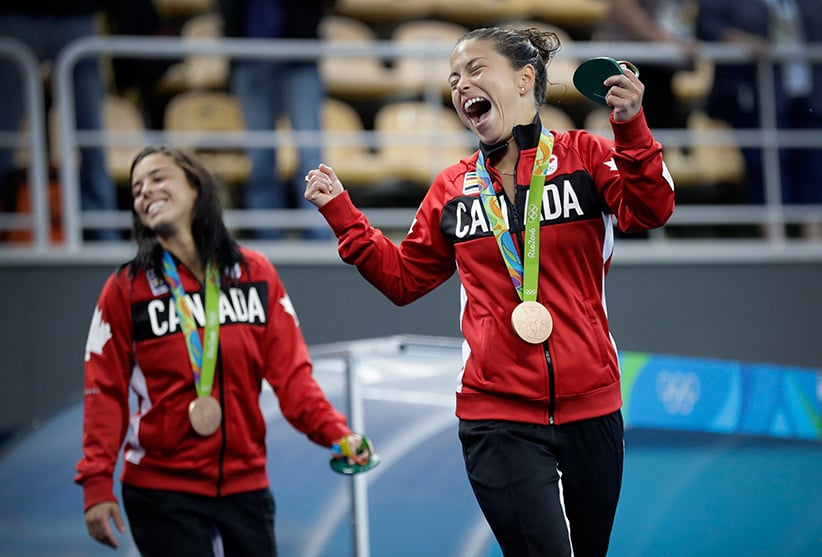 It’s one thing to win a medal at one Olympic Games. (Don’t get me wrong—it’s an extraordinary thing.) But to win that same medal four years later, well, that speaks to an athlete’s sustained excellence, to an elite career, to a signature level of dedication and determination and dominance. Yesterday, 10-metre platform synchronized divers Meaghan Benfeito and Roseline Filion announced definitively that they are in that category of athlete, winning their second consecutive Olympic bronze. They also carried on a long tradition of Canada representing on the diving podium. Here’s the 411 on this pair of water-bound acrobats.

The story of their dives

Filion did gymnastics from age five to eight, but decided to switch sports after watching Annie Pelletier win bronze for Canada on the three-metre springboard in the 1996 Atlanta Games. For Benfeito, inspiration came from watching four-time Olympic medallist Émilie Heymans.

In the early going, Filion competed individually on both the three-metre springboard and 10-metre platform, frequently finishing top-five in junior national championships. Benfeito followed a similar trajectory, and for several years partnered with Jennifer Abel on the synchronized three-metre (at one Canadian meet in 2008, Benfeito placed fifth on both the individual three-metre and 10-metre, won the synchronized three-metre with Abel and came in second with Filion in 10-metre synchro).

The divers began competing together in 2005, and that same year won bronze at the world championship. Since then, they have seldom finished off the podium at major meets. At the last two world championships, in 2013 and 2015, they took home silver.

Individually, for Filion, it’s her arm-stand dive, a backward triple rotation she begins by planting her hands on the platform and pushing off. Filion has a unique style of setting her arm stand—most divers press up while Filion kicks up. That’s a holdover from her gymnastics days.

Both divers will compete in the individual 10-metre contest, which begins Aug. 17. Filion is currently ranked third in the world; Benfeito is at No. 11. At the 2012 Games, they finished 10 (Filion) and 11 (Benfeito).