Podium proposals are all the rage in Rio. They shouldn’t be.

It’s only a matter of time before returning Olympians are greeted with: 'Great about your gold, where’s the diamond?' 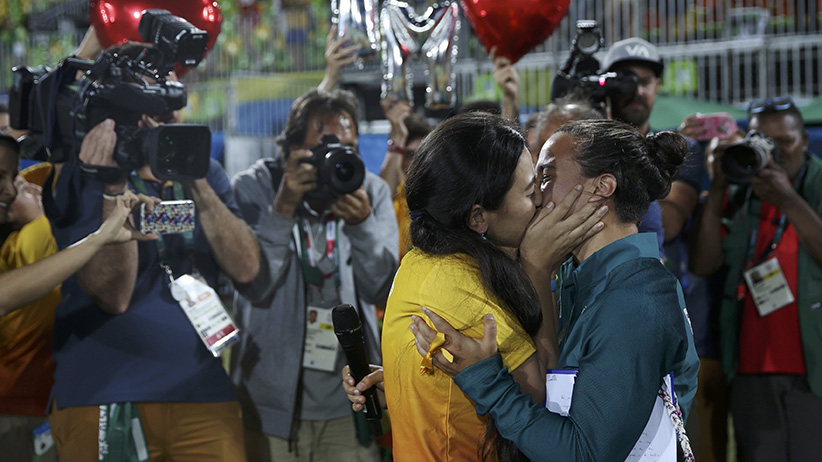 The surprise marriage proposal is officially an Olympic event. As of Aug. 16, there have been three Rio engagements (plus one re-engagement), with the tally rising daily. It’s only a matter of time before returning Olympians are greeted with: “Great about your gold, where’s the diamond?” The first ever Olympic proposal—stadium manager Marjorie Edna asking Brazilian rugby player Isadora Cerullo to marry her during the women’s rugby awards ceremony after Brazil was sidelined—was sweet and joyful, even a bold statement at a Games that has seen ugly homophobic chants. Days later, we entered rom-com territory with the first podium proposal: Chinese diver Qin Kai dropped to one knee to proffer a ring and a Bachelor-esque red rose encased in glass to his girlfriend of six years, He Zi, who’d just received a silver medal in women’s 3-m springboard. On Monday, engaged British equestrian Charlotte Dujardin was proposed to again after she finished a test course. Dean Wyatt, her fiancé since 2012, pulled a Lloyd Dobler in the stands, wearing a t-shirt that read “Will you marry me now?” The couple was to marry next year, Dujardin told reporters, adding, “I don’t think he believed it was going to happen so I think he has made it so public that now I am certainly going to do it.”

The comment hints at the public proposal’s creepier side, one those who view Love Actually annually will no doubt reject: it can seem coercive, with No not an option. (That said, YouTube is filled with public proposals gone awry, as embarrassed women flee in tears.)

That’s not an option at the Olympics, where public proposals can overshadow athletic accomplishment. Qin, who may have had the best intentions, bigfooted his beloved’s hard-won moment in the spotlight as well as that of gold medallist Shi Tingmao of China and Tania Cagnotto of Italy, who took bronze. Both were good sports, expressing a joy not evident on He’s face. “I feel it is too soon to get married and to get a proposal,” the 25-year-old told one outlet. She was somewhat more enthusiastic to the BBC: “He said a lot of things, made a lot of promises, but I think the thing that touched me the most is I think this is the guy I can trust for the rest of my life.” Predictably, the medallists’ press conference was dominated by proposal questions. Media coverage was telling. “Chinese diver proposes marriage at Olympic medal ceremony” read a BBC headline that erased He; she snagged “an even bigger prize” than her medal, the story claimed. Focus on female athletes’ marital status has punctuated a Games where women have performed gloriously. After American Corey Cogdell won bronze in trap shooting, the Chicago Tribune identified her in a tweet as “wife of a Bears’ lineman.” When Hungarian swimmer Katinka Hosszu shattered the world record in the 400-m medley, NBC claimed her husband and coach was “responsible for her victory.”

The surprise proposal should be archaic at a time of marital equality and shared decision-making. It’s a “tradition” traceable to DeBoer’s, the diamond cartel that insists engagement rings cost the equivalent of two months salary. Making one of life’s most important decisions an unexpected shock is strategic: a prospective wife (or husband) picking out her or his own ring might make a more frugal choice. Yet social media and reality TV have made the public proposal de rigeur, the high (or low) water mark seen when Kanye West rented a baseball stadium—with pyrotechnics, Jumbotron, and an orchestra—to pop the question to Kim Kardashian in 2014. No one sticks a ring in dessert and prays their loved one doesn’t choke any more. Now we have elaborate scavenger hunt proposals chronicled on HowHeAsked.com. When British race walker Tom Bosworth tweeted his proposal to boyfriend Harry Dineley on a Rio beach Tuesday it seemed positively Victorian.

The IOC, no doubt, is thrilled. The Olympics are fertile ground for brands seeking adjacency with performance and excellence. Now that winning extends to the romantic realm, a potential new slate of sponsors—and an audience tired of The Bachelor—awaits.

Aug. 15: After receiving a silver medal for Team USA in the men’s triple jump final, American jumper Will Claye ran to the stands and presented his girlfriend, American hurdler Queen Harrison, with a diamond ring. She accepted.

Aug. 16: It was announced Belarusian swimmers Aliaksandra Herasimenia, who won bronze in the 50-m freestyle, and fellow swimmer Yauhen Tsurkin became engaged early in the Games. Details are scarce; the athletes bucked the current Rio Olympic public proposal trend and chose to commit outside the limelight.