Putting Calgary's Olympic bid out of its misery

As the project dies—or limps along—what are Calgary's boosters left with? Some hard questions about how to best lift their city from the doldrums. 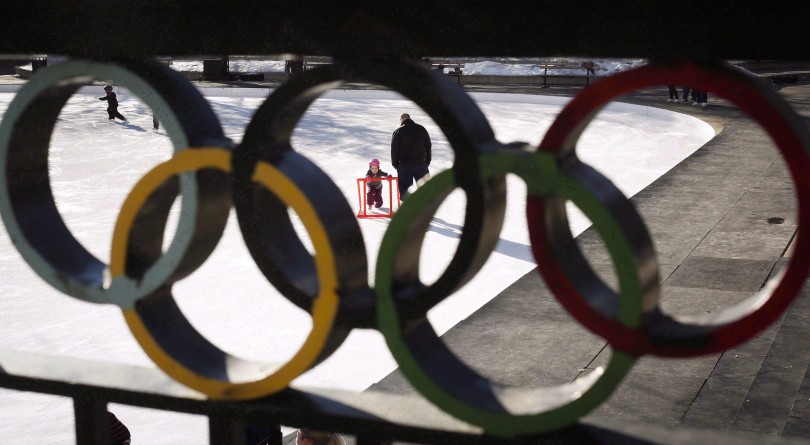 The 1988 Calgary Olympic Plaza, as seen in 2014 (THE CANADIAN PRESS/Jeff McIntosh)

Calgary, the city that rallied and volunteered and mobbed the downtown pin-trading tables in 1988, risked holding a large plebiscite on hosting another Winter Olympics in which only one-quarter or so of the population might have bothered to cast ballots. The other high risk was that most of those who showed would have been tax-dollar-clutching skeptics who weren’t sold on the 2026 bid corporation’s hazy promises or top athletes’ pom-pomming—that the boosters and dreamers and idealists would find themselves in the minority of a minority, thereby shattering one of Calgary’s key myths about itself, one firmly established in the glow and afterglow of Winter ’88.

Mayor Naheed Nenshi and the bid promoters will be spared that potential indignity after a council vote Wednesday pulls the cord on the plebiscite and the entire 2026 plan. After several blustery days of negotiations, recriminations and shuttle diplomacy via the pages of the Calgary Herald, the chairman of Calgary council’s Olympic oversight panel proposed formally ending the project. Between the provincial, federal and city funding pledges, there is reportedly a gap of hundreds of millions of dollars, and after hours of closed-door debate there is “no willingness from myself or council to fill that gap,” said Evan Woolley, the Olympic committee chairman and a hitherto supporter of Calgary 2026.

After all the prior last-ditch negotiations failed, Nenshi expressed optimism of somehow salvaging a financial deal before the gallows vote. He used a non-winter sports analogy: “In CFL, you often get that last field goal in the very last second going through the uprights.” In French, he said it would take a Hail Mary, which sounds more desperate and low-hope, but suggested that was only because he was unsure what “field goal” is in French. (Answer: botté de placement, or le field goal.)

Canadian Olympic athletes (former and aspiring) now trying to bring the Winter Games across the finish line in Calgary by convincing city council not to kill the bid in tomorrow's vote. #yyc #yyccc #Calgary2026 pic.twitter.com/NsfOBZ1BLl

Sources familiar with the wisps of hope for keeping Calgary 2026 alive say one key option featured “creative accounting” to make all the numbers add up to the $3-billion in public funding required to host the Olympics. If Calgarians were already skeptical on the dollars-and-cents of voting “Yes” on a plebiscite, a fiscal solution that leans heavily on “creative accounting” could prove as hard a sell as replacing the province’s NDP government next spring with the Marxist-Leninists.

UPDATE: Around 10 p.m Mountain, the city hashed out something new termed not an agreement, but “an agreement to consider the proposal.” Almost overnight, the total budget dropped by $150 million—a sudden savings found in the security budget. “The RCMP came back last week and said security could done for less so we found efficiencies… we could decrease our spend on accommodations for security personnel,” wrote bid spokesman James Millar in an email. This would be a sharp reversal from the trajectory of Vancouver 2010’s security budget, which started at $175 million and came in around $900 million. And the city added in $150 million in related improvements near the Stampede ground to count as matching funds for Ottawa’s $1.423 billion, which is below the $1.5 billion offered earlier. On Wednesday morning, council votes on whether to animate this Frankenstein’s monster of a deal and let it lurch toward a Nov. 13 plebiscite, or leave it flat on the gurney.

A death to the bid by council vote may be more graceful (and cheaper) than watching citizens democratically nuke the project. But any such evasive maneuvres could have happened far sooner, or been entirely unnecessary, had the parameters of who liked and disliked Calgary 2026 and to what degree been clearer months in advance.

The provincial government announced its $700-million offer a few weeks ago, and Ottawa leaked out its $1.5-billion (in today’s dollars) over the weekend. Until late Tuesday, the public still had no confirmation how much money city hall was willing to spend, the question around which so much of the plebiscite seemed to hinge.

The political upside of pouring in an extra barrel of money, or being the level of government that pushes this project to the full-funding mark, was highly unclear. Who wants to be the champion of a massive venture that the city’s residents don’t want to support? Nenshi has professed love of the Olympics but has avoided being the bid’s champion, in part because he wants to remain circumspect of the finances, in part for the sake of plebiscite neutrality, and in likely part because of a chronic fear of being on the wrong side of public opinion. This means his only strong activism for the Winter Games has been his familiar kvetch to Ottawa and Alberta’s capital for more dough.

After all, the arguments for Calgary 2026 have always wavered between unclear and lame. For all those billions of dollars, Calgary would get a new sport fieldhouse (for indoor soccer, track and field, figure skating, etc.) and an arena sized well below NHL demands—and the refurbishing of a series of existing sports venues and buildings used for the 1988 Winter Games. No new convention centre, highway upgrades or rail link to the airport like Vancouver got around its 2010 Olympics, but that was sort of by design in the International Olympic Committee’s push to drive down the costs and needless infrastructure monuments that have marred past games.

It meant the city would have little shiny and new to show for it after 2026, so bid backers argued that this was the best way to find billions to refurbish the vital amateur sports facilities that make Calgary shimmer with sports tourism and pride. Which sounds peachy, but for the problem that annual amateur sports World Cups tend to bring in few spectators who aren’t Dutch speed-skating coaches or cousins of elite Quebec snowboarders, and that there is little that governments like more than having photo ops with large novelty cheques and top athletes as they keep Canada’s Olympic flame a-flickering and its venues from collapsing.

Contrary to the Yes side, Calgary will also receive gradual public housing dollars as well without using an athlete’s village as the premise for elected leaders to actually care about low-income and homeless people. The housing and sport upgrades won’t all come at once without an Olympics, but governments will also be at greater liberty to plan those projects as they please, not on an Olympics timetable—and if that means Alberta won’t needlessly spend money refurbishing an inner-city conference hall that’s long been tabbed for demolition, or convert underdog ski hill Nakiska into a world-class competitive venue (when a better one already exists in Banff National Park, an Olympics no-go zone), then ho-hum oh well.

As the project dies (or limps forward, bloodied and short on a limb or two) on Wednesday, what are Calgary’s boosters left with, without an Olympics? They face the hard questions of how to lift Calgary out of the low-oil-price doldrums and to rescue its downtown from massive vacancy rates without a galvanizing golden-ticket initiative that would have papered over those challenges instead of solving them. Some leaders have been quite nearly talking down Calgary’s prospects without a games—bid leader and economic development agency CEO Mary Moran quipped that the city would be Winnipeg without the 1988 Olympics (oil prosperity be damned?).

The 1988 Games left Calgary with new sport venues, a spruced-up LRT network and sports venues, and a vastly more exuberant self-image—for 2026, boosters can only reasonably offer the third of those. After 1988, the boom didn’t arrive until early the following decade. Eight years from now, the economy will be terrible or sizzling or something in between regardless of whether a ceremonial torch parades through the city. That could suit the populace just fine.