Pyeongchang 2018: Pop songs with words are good for figure skating

Purists will grumble, but familiar tunes with catchy lyrics bring energy to the sport that Tchaikovsky can't 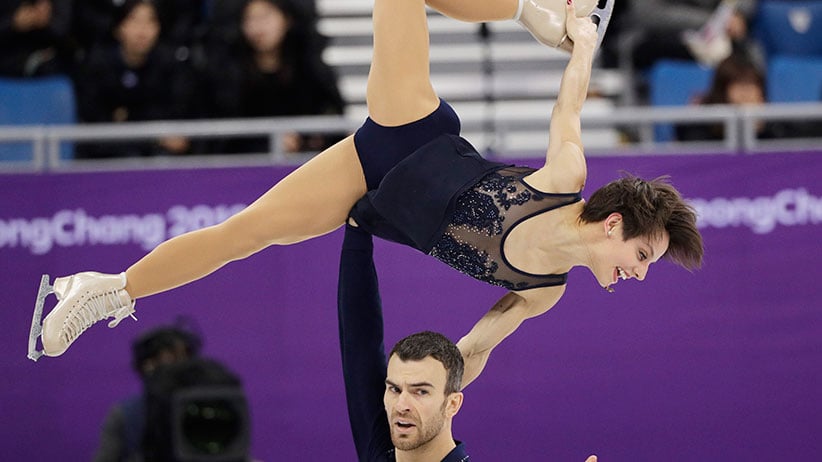 The Olympic medal favourites from Team Canada had just finished their first pair’s routine in Pyeongchang, a nearly flawless skate as they danced to her cover of the hit U2 song “With or Without You.” Meservy was even there to see it all, thanks to an anonymous donor who bought her a ticket to Pyeongchang so she could watch the Canadians skate to her song.

It was a feel-good story unlike any from previous Olympics, in part because this is the first Games where singles and pairs figure skaters are allowed to perform to music that includes lyrics (in ice dancing, music with lyrics has been permitted since the 1990s). The reason: figure skating needs new fans.

Since the 1990s heyday of the sport’s popularity, when the all-American drama of Tonya Harding versus Nancy Kerrigan was playing out on the ice—as opposed to a movie theatre in 2017—figure skating has struggled to keep up its popularity, especially among the all important U.S. audience.

Fewer than half as many Americans tuned in to watch figure skating for the 2014 Sochi Games as they did for the Harding-Kerrigan smackdown at the 1994 Winter Olympics in Lillehammer. In those two decades, the sport lost some star power, not to mention fans in the aftermath of the 2002 Games in Salt Lake City, which were so plagued by judging controversies the sport completely revised how it scores routines.

The International Skating Union started its experiment with musical lyrics months after Sochi finished in hopes of helping the sport rebound from its waning popularity, most notably among younger viewers. For the history books, the very first song with lyrics blasting over the loudspeaker at a major competition, back in October 2014, was Canadian Michael Bublé and his rendition of “Cry Me a River,” a choice by Russian skater Artur Gachinski. Since then, the world’s best figure skaters have danced on ice to the music of Justin Bieber, Christina Aguilera and—yes—rapper Eminem.

Needless to say, the right song choice can bring a level of energy the music of Swan Lake can’t.

Fast forward to Pyeongchang, and the song selection is sometimes prophetic. Canada’s Patrick Chan, having never won Olympic gold at previous Games despite being a three-time world champion, fell to the ice multiple times in his first skate in Korea. It was very disappointing short routine in the team event for what is likely his last Games, and his song choice? “Dust in the Wind.”

However, days later for his free skate routine, Chan landed two quads to help launch Canada—and himself—to a gold medal. Perhaps it only fitting that his song choice that day was a cover of Leonard Cohen’s “Hallelujah.”

As with any sport with decades of history, there is no shortage of critics, who argue the new playlists serve as a crutch for skaters relying hit songs to get the crowd going to the song choice simply detracting from the main event: the skating itself.

RELATED: The North Korean figure skaters have a Canadian connection

Then there are the language barriers at international events. What good is a South Korean skater trying to playfully sync up a dance routine with lyrics in a K-Pop song if most of the judges don’t speak Korean?

Since the musical changes have been adopted, however, figure skating has seen its popularity—at least in America—climb back. The U.S. Figure Skating organization has said its membership has grown steadily over each of the past four years, according to CNN, and viewership for 2018 U.S. Figure Skating Championships in January was 60 per cent higher than the year prior.

Thus far in Pyeongchang, music has been a constant driver of conversation among figure skating viewers—from the North Korean pairs team skating to an instrumental cover to the Beatles’ “A Day in the Life” to Sport Illustrated awarding “medals” for the best skating musical choices.

As for Meservy, before the Olympics she was unknown indie singer from Utah. Then, without warning, she was getting her 15 minutes of fame and international media attention. Kind of like an Olympian.